The CPUSA and CP of Vietnam: Linked by a thousand threads 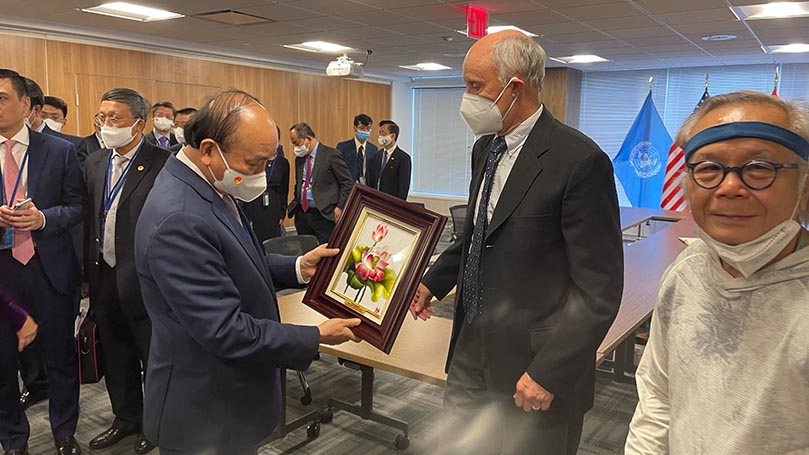 The following greetings were prepared for the Vietnam delegation to the United Nations General Assembly during their visit to New York.

I bring greetings and warmest solidarity from the Communist Party USA.  The opportunity for us to give such a greeting has an added resonance, as a number of us grew  to become communists  through our initial activism against U.S. imperialism’s  30-year war against the Vietnamese people.

It is also good to be here with Vietnam solidarity activists, including those  who have long sought to redress the damage done to the Vietnamese people, infrastructure, and environment through the U.S. military’s criminal  use of chemical agents, (especially “Agent Orange”), a damage from which your nation is still recovering.

Today U.S. President Biden’s  speech to the UN General Assembly  reportedly will call for a global response to address worldwide crises. and may contain some welcome notes after Trump’s bellicose “America First “ war mongering and opposition to such collaboration.

Whatever happens today, though, we know the present system of corporate nation-states  has at best a short-term interest in addressing the worst effects of human-made climate change, and  the related crises of rampant inequality, lack of health care, hunger, and mass migration.  Comprehensive  solutions involve united action of the workers and oppressed of the world around these issues, not the least because capitalism is primarily responsible for creating these crises  in the first place.

One such issue is the continuing worldwide COVID-19 pandemic, where close to 5 million have died, and wealthier  nations retain  a monopoly on vaccine production and distribution.

Despite scarce resources, Vietnam, Cuba, and China’s relative success has been in sharp contrast to the performance  of the United States health-care-for-profit system.  Your use of your national health program and community-based medicine has been a sterling  example of a health care system that  addresses people’s needs, not profits. In our country, supposedly the most advanced health care system  in the world, the U.S. death count from  COVID is now one sixth of the worldwide total, and climbing. The people’s  movement’s  mobilizations  around the U.S. presidential election and the election of Democratic Party President Biden was a rebuff to the extreme right, but a right-wing danger continues. We in the CPUSA work for a broad, people’s front against the Trumpist Republican Party’s attempted fascistic power grab of all branches of government and attacks on democracy.

Our Party is growing and we also work in broad coalitions for people’s needs, health care, housing, and justice. Many of our youth are attracted to our strategy and tactics in building the mass movements,  as well as our independent Party initiatives, our history of struggle against racism against African American, Latino, and Asian people, and our internationalism.

Nevertheless, in this time of great opportunity and great danger for the world working class,  our parties are tied together by a thousand threads.

Long live the fraternal relations among the CPUSA  and the CPV!