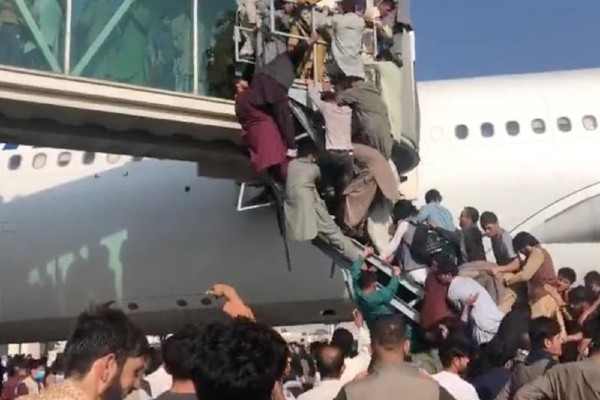 People in Kabul desperately attempt to board aircraft in order to leave the country. (Pic: Budiey/Flickr)

After 20 years, at least a ­quarter of a million killings and trillions of pounds spent on military assaults, the Taliban has overthrown the Western-backed government in Afghanistan.

It is a colossal defeat for British and US imperialism. Even decades of bloody war could not ensure they won.

On Sunday it took one day for the Taliban to declare victory in the capital city Kabul after Afghan president Ashraf Ghani rushed to flee the country and his government collapsed.

Ghani fled without warning as Taliban forces moved in on Kabul.

Kabul was the last city to fall into the hands of the Taliban as its ­progress across the country took place at astonishing speed.

Over the weekend the second and third biggest cities were taken over, as were whole regions following the collapse of the Afghan army.

Many of the Afghan army ­commanders did deals with the Taliban and offered no armed resistance.

Photos emerged on Sunday of the Taliban in the presidential palace in Kabul.

Taliban fighters posed next to US-made Black Hawk helicopters and other aircraft seized from Afghanistan’s military.

The footage appeared to be filmed in a hangar at Kandahar air base, which until recently was one of the US’s most important bases in Afghanistan.

A fighter can be heard claiming that at least five helicopters and ­several jets were inside the base.

The US-made aircraft are ­estimated to be worth several million dollars each.

This is what total defeat of US and British invasion looks like.

Britain and the US rapidly moved to send in thousands of troops. They say this will be to evacuate their national citizens, including diplomats and embassy staff who are “eligible”.

But US troops fired shots at Kabul ­airport to stop people attempting to reach flights “only meant to ferry diplomats, foreign staff and local embassy staff”.

Five people are reported to have died as a result of stampedes triggered by confusion and chaos.

In Britain, parliament was recalled for Wednesday this week to discuss the unfolding events.

Many are now rightly asking why so much money was spent, and so many mostly young lives wasted, for nothing except murder and bloody mayhem.

The blame for the desperate ­situation lies solely with the West. Imperialist forces threw everything they had at the Middle East to secure their control and influence.

The US-led and British backed campaign that lasted two decades has been a complete failure.

And now, after it’s too late, they are retreating as fast as possible and leaving behind the destruction they’ve caused.

The British government has said it will allow in some Afghan refugees, but not how many.

It is likely to restrict access to those who worked most closely with the West’s military and the Afghan government.

The one useful action Britain could take now is to say that all Afghan refugees should be allowed to come here, and all deportations should end.

European Union states are now panicking about when they can deport asylum seekers to Afghanistan. And they’re worried about how many people might now try to flee west. Six EU member states have warned against halting deportations of rejected Afghan asylum seekers.

“Stopping returns sends the wrong signal and is likely to motivate even more Afghan citizens to leave their home for the EU,” Austria, Denmark, Belgium, the Netherlands, Greece and Germany said in a letter to the European Commission.

The answer isn’t to send people back to dangerous situations.

Instead, borders must open to all those fleeing from horrors triggered by the West.

US doesn’t care about women

In 2001 Britain and the US justified the invasion of Afghanistan as a war of “humanitarian intervention”.

In reality, they wanted to reassert the US’s control of the Middle East and beyond.

Rulers do not care about improving the lives of people anywhere—they care only for domination, markets and control.

If they did give the slightest care to civilian lives, bombing them wouldn’t be the way to show it.

The West claimed that the war was justified because democracy and human rights had to be defended from the Taliban, in particular women’s rights.

Yet the West allies itself with regimes such as the one in Saudi Arabia that systematically crushes women’s lives.

Now the situation looks perilous for those left behind.

As a result of Western intervention and a 20-year war, the lives of people in Afghanistan have been made much worse. The Taliban grew because of foreign intervention and the repeated murder of civilians by Western forces.

Life for women under the Taliban will indeed be repressive and harsh. It will be a regime that tramples on people’s rights.

But military intervention is not the answer

Liberation is never handed over or given to the oppressed. And it certainly isn’t granted through years of bombs, war and bloodshed.

The only way for the oppressed to free themselves is through self-action and self‑emancipation.

The US and Britain don’t care for women’s rights. They will shut their borders to many refugees attempting to flee Afghanistan, and look at their treatment of oppressed people at home.

The only way to win true liberation is to fight for it from below—not for it to be used as an excuse to fight a war.