The depths of injustice 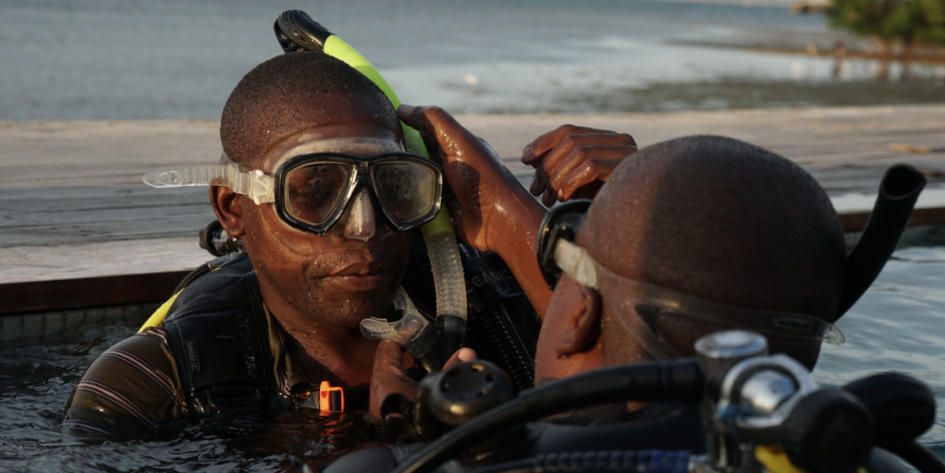 During the trans-Atlantic slave trade, approximately 11,000 voyages started from ports in England, stopping along the shores of west Africa to load their human cargoes before landing on the shores of the Americas to sell human beings into slavery. There, captured Africans were traded for spices, sugar and other goods, which were then brought back on the final leg of this journey, to be sold in England.

My ancestors survived the perils of the trans-Atlantic slave trade. In my work with Diving With a Purpose (DWP) and its maritime archaeology programme, I honour their memory. Educating through storytelling is the essence of DWP’s mission. As a descendent of five generations of educators, teaching and exposing people to maritime archaeology feels like part of my heritage.

One of many stories that I tell through DWP is about the British slave ship Henrietta Marie, which departed London in 1699 and travelled to an area that spans from what is now Sierra Leone to Nigeria. There, its captain Thomas Chamberlain and crew loaded 274 Africans onboard. Only 190 survived the journey. In May 1700, they were sold into slavery in Jamaica. Loaded with sugar and other goods, the ship headed back to London. It never arrived. The Henrietta Marie wrecked 35 miles south of Key West, Florida. The wreckage was discovered in 1972.

In May 1993, after a fundraising campaign, the National Association of Black Scuba Divers (NABS), built an underwater monument at the wreck. Its bronze plaque faces eastward, towards Africa, with the inscription: ‘Henrietta Marie. In memory and recognition of the courage, pain, and suffering of the enslaved African people. Speak her name and gently touch the souls of our ancestors.’ Members of NABS and DWP still participate in an annual pilgrimage to clean the plaque.

A different kind of dive

Recreational scuba divers usually enjoy diving shipwrecks, where they can see the basic structure of a wreck – the deck, hull or engine. Some ships are intentionally sunk to create artificial coral reefs, which attract aquatic life seeking shelter and food. Generally, on recreational dives, people pay little attention to a ship’s history – me included. On scientific dives to slave ships, however, I dive to unearth their histories and to tell the stories of the souls lost aboard them. The deck or hull of a slave shipwreck usually cannot be seen. Often, only pieces of decking or some contents of the ship such as cannons or cannon balls, are visible, largely hidden by the sandy sea floor, or covered by coral.

Knowing that my ancestors lost their lives on these vessels, I consider slave shipwreck sites to be underwater consecrated ground. When diving and documenting a ship, I remember the people captured on the vessel. Imagining their fear, pain and suffering is constantly on my mind as I descend upon a site. At times, I can hear the screams of the human beings locked in the ship’s hull, while I measure an artifact uncovered centuries later. It is humbling to have the opportunity to document the stories of my ancestors.

At times, I can hear the screams of the human beings locked in the ship’s hull, while I measure an artifact uncovered centuries later

Only a handful of wrecks have been found but one challenge I share with colleagues is the lack of time and resources to tell many of these stories. Another challenge is deciding which to tell: of the Spanish ship Guerrero, the British ship Dolphin or the French ship L’Aurore? Each tells part of a story, several centuries long, of crimes committed around the world. They should be told to an international audience.

Glimpses of a global industry

When I look at 17th-century schooner ships, I see the first instrument of a global economy that has left behind a far-reaching footprint. DWP’s work in searching, documenting and telling the stories of these ships and the people captured aboard them provides a historic lens though which to see the common threads and tools used to oppress African people from the 16th-century to today – as the Black Lives Matter movement highlights.

The trans-Atlantic slave trade was not the only route for this global industry. Very little is written about the Indian Ocean route, which also began in Europe, but travelled to East Africa and then to the Persian Gulf, India and Sri Lanka. Mozambique was a main trading hub for multiple slave trade routes, and DWP works there searching for slave ships and encouraging people locally to participate in preserving our shared heritage.

I teach Mozambicans to scuba dive and to become ‘community monitors’, tasked with educating their neighbours on submerged cultural heritage and giving public presentations on the slave ships located off their shores. These presentations include stories of the direct descendants of people who were held aboard these ships. I also teach students at the local university, and am learning Portuguese, Mozambique’s national language, to assist my work. Local scuba diving professionals support training and translation, and we share a common bond: respect for culture and love for the ocean.