The driver of dispossession 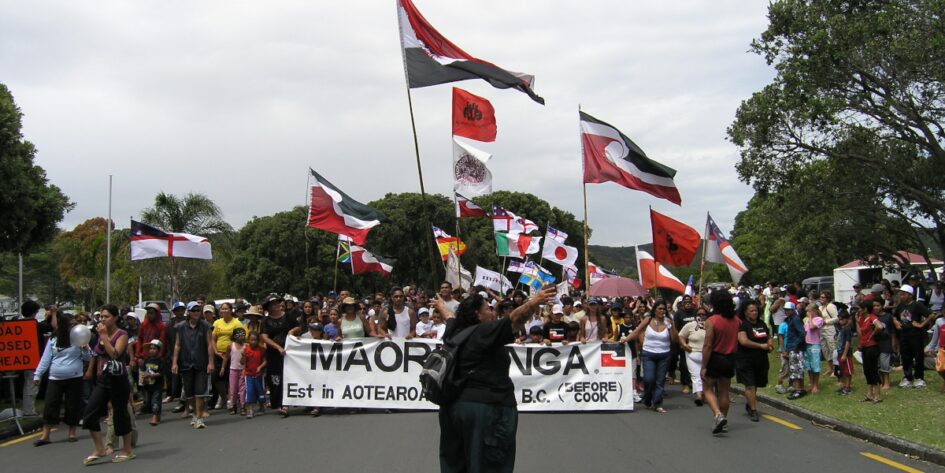 The ‘doctrine of discovery’, also known as the doctrine of Christian discovery, is an international legal concept and Christian principle borne out of Catholic laws (called papal bulls) that originated in the Vatican in the 15th and 16th centuries. The doctrine provided a framework for Christian explorers, in the name of their king or queen, to conquer and claim lands uninhabited by Christians, and to convert or kill the native inhabitants of those lands. Over 250 years ago, in 1769, this process was carried out in Aotearoa (the Māori name for New Zealand), by James Cook.

Within the framework of the doctrine, indigenous peoples were considered non-human, and therefore the land was empty, or terra nullius. As such, territories could be defined as ‘discovered’ and sovereignty claimed. When Cook arrived in Aotearoa, he was under orders to claim land for King George III, preferably by consent. He did so without consent. When he arrived in Australia, there would have been up to 750,000 people living there, people who had been living on those lands for over 65,000 years. Cook declared the land terra nullius. In Aotearoa, Lieutenant William Hobson, on order from the British crown, similarly declared Te Waipounamu (the South Island) terra nullius in 1840, and then claimed it for the crown.

In 2012, the United Nations Permanent Forum on Indigenous Issues held its eleventh session on the special theme of the ongoing impact of the doctrine on indigenous peoples and the right to redress. The doctrine was denounced throughout the session as the ‘shameful’ root of all discrimination and marginalisation faced by indigenous peoples today. The forum noted that, while such frameworks of domination and ‘conquest’ were promoted as authority for land acquisition, they also encouraged despicable assumptions: that Indigenous peoples were ‘savages’, ‘barbarians’, ‘inferior’ and ‘uncivilised’, among other constructs the colonisers used to justify their subjugation, domination and exploitation of the lands, territories, resources and bodies of native peoples.

Yet the doctrine remains a legal foundation for many of the court cases and pieces of legislation in Aotearoa. One of the most famous court cases in New Zealand legal history is Wi Parata v the Bishop of Wellington of 1877. It famously declared the 1840 Treaty of Waitangi – the foundational document of New Zealand, which established Māori chieftainship over their lands – ‘a simple nullity’ and found instead that the Crown held the only valid title to land.

This finding, by Judge James Prendergast, relied upon a precedent case from the United States, that of Johnson v McIntosh (1823), which had invoked the doctrine of discovery. In that case, US Chief Justice John Marshall repeatedly cited the doctrine, saying that ‘discovery gave title to the government by whose subjects it was made, against all other European governments [which] necessarily gave to the nation making the discovery the sole right of acquiring the soil from the natives’.

In using this US case as a precedent, Judge Prendergast inserted the doctrine into New Zealand law. These findings have been used as precedent and supported by judges in the denial of Māori rights and the alienation of Māori land right up to the current day. In a 2003 court of appeal case, Chief Justice Sian Elias raised concerns about this state of affairs: ‘I am of the view that the approach taken by Turner J in the supreme court and by the court of appeal in In Re: the Ninety-Mile Beach can be explained only on the basis that they were applying the approach taken in Wi Parata v Bishop of Wellington. On that approach, Māori property had no existence in law until converted into land held in fee of the Crown. Until then it was assumed to be Crown property… For the reasons already given, such view is contrary to the common law.’

In legal speak, that’s Chief Justice Elias saying, ‘Get the fuck outta here with any idea that the crown owns the foreshore.’ In response, however, the government drafted legislation that, in direct conflict with these findings, vested ownership of the foreshore and seabed with the crown. So, even when the judges stopped explicitly supporting it, the government still based legislation on the doctrine of discovery.

The doctrine has come to mean much more than a legal concept acknowledged by the UN as ‘the driver of all indigenous dispossession.’ The laws and policies that grew out of the doctrine have come to shape society’s ideas and attitudes about indigenous peoples and our rights. At the 2012 UN forum, international human rights and Indigenous rights lawyer Moana Jackson explained:

‘While the doctrine of discovery was always promoted in the first instance as an authority to claim land of indigenous peoples, there were much broader assumptions implicit in the doctrine. For to open up an indigenous land to the gaze of the colonising ‘other’, there is also in their view an opening up of everything that was in and of the land being claimed. Thus, if the doctrine of discovery suggested a right to take control of another nation’s land, it necessarily also implied a right to take over the lives and authority of the people to whom the land belonged. It was in that sense, and remains to this day, a piece of genocidal legal magic that could, with the waving of a flag or the reciting of a proclamation, assert that the land allegedly being discovered henceforth belonged to someone else, and that the people of that land were necessarily subordinate to the colonisers.’

In short, the doctrine has been used not only to exercise control over indigenous lands, but also over indigenous peoples – as reflected in the many times Cook and his crew took native lives while also taking the land.

This disregard for indigenous rights remains, at all levels, today. The ‘waving of a flag or reciting of a proclamation’ that Moana refers to are the rituals carried out by colonisers to apply the doctrine and state the crown’s claim of land. These rituals were re-enacted around Aotearoa and Australia in 2019 to mark the 250th anniversary of the original claim.

If we accept that the NZ government is in breach of the Treaty of Waitangi – by establishing itself in a way that subverted tino rangatiratanga (Māori sovereignty) and by failing to secure adequate and appropriate Māori representation – it begs the question: by what right does the government continue to make laws that impact upon Māori lives and lands? The simple answer is that the NZ government is not operating under the provisions of the treaty. It is operating under the provisions of the doctrine of discovery – which it re-entrenched as recently as 2019.

Tina Ngata is a writer and advocate for environmental, indigenous and human rights, based in the east coast of Te Ika a Maui