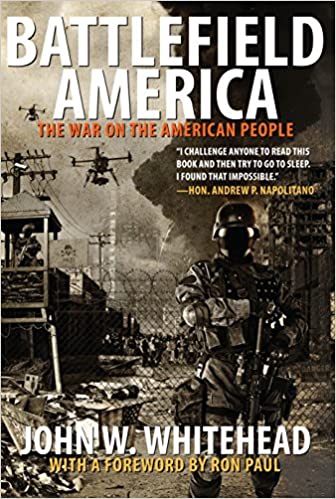 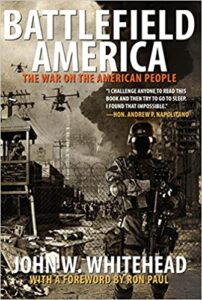 America is breaking down.

This breakdown—triggered by polarizing circus politics, media-fed mass hysteria, racism, classism, fascism, fear-mongering, political correctness, cultural sanitation, virtue signaling, a sense of hopelessness and powerlessness in the face of growing government corruption and brutality, a growing economic divide that has much of the population struggling to get by, and militarization and militainment (the selling of war and violence as entertainment)—is manifesting itself in madness, mayhem and an utter disregard for the very principles and liberties that have kept us out of the clutches of totalitarianism for so long.

In New York City, for example, a 200-year-old statue of Thomas Jefferson holding the Declaration of Independence will be removed from the City Council’s chambers where it has presided since 1915. Despite Jefferson’s many significant accomplishments, without which we might not have the rights we do today, he will be banished for having been, like many of his day, a slaveowner. Curiously, that same brutal expectation of infallibility has yet to be applied to many other politically correct yet equally imperfect and fallible role models of the day.

In Washington, DC, a tribunal of nine men and women spoke with one voice to affirm that the government and its henchmen can literally get away with murder and not be held accountable for their wrongdoing. The Supreme Court’s latest rulings are yet another painful lesson in compliance, a reminder that in the American police state, “we the people” are at the mercy of law enforcement officers who have almost absolute discretion to decide who is a threat, what constitutes resistance, and how harshly they can deal with the citizens they were appointed to ‘serve and protect.”

All across the country, from California to Connecticut and every point in between, men and women who have worked faithfully and diligently at their jobs for years are being terminated for daring to believe that they have a right to bodily integrity; that they should not be forced, against their conscience or better judgment, to choose between individual liberty and economic survival; and that they—and not the government, or the FDA, or the CDC, or the Corporate State—have dominion over their bodies. Conveniently enough, this COVID-19 pandemic has created yet another double standard in how “we the people” navigate this country: while “we the middling classes” are subjected to vaccine mandates and denied even the right to be skeptical about the origins of the COVID virus, let alone the efficacy of the so-called cure, the government, corporations and pharmaceutical companies have been shielded from liability with blanket immunity laws that ensure we are little more than guinea pigs for their questionable experiments.

And then in Pennsylvania, a man traveling on a commuter train harassed, assaulted and then raped a woman over the course of 40 minutes and more than two dozen train stops while fellow travelers, watching and filming the attack, did nothing. Not a single witness called 911. Not a single bystander intervened to help the woman. Despite the fact that the man was outnumbered and could have been overwhelmed by those on the train, no collective effort was made to ward off the attack. Only when it was too late, when the damage had been done and the train had pulled into its last stop, did police show up to intervene.

There is an allegory here for what is happening to our country and its citizens, who have also been waylaid by a madman (the Deep State), stripped of their safety nets (their rights undermined and eroded), and savaged out in the open by a fiend (the American Police State and its many operatives—the courts, the legislatures and their various armies) that is devoid of humanity while those not in the immediate crosshairs watch safely from a distance without making a move to help.

This is madness, yet there is a method to this madness.

This is how freedom falls and tyranny rises.

Remember, authoritarian regimes begin with incremental steps: overcriminalization, surveillance of innocent citizens, imprisonment for nonviolent—victimless—crimes, etc. Bit by bit, the citizenry finds its freedoms being curtailed and undermined for the sake of national security. And slowly the populace begins to submit.

No one speaks up for those being targeted.

No one resists these minor acts of oppression.

No one recognizes the indoctrination into tyranny for what it is.

Historically this failure to speak truth to power has resulted in whole populations being conditioned to tolerate unspoken cruelty toward their fellow human beings, a bystander syndrome in which people remain silent and disengaged—mere onlookers—in the face of abject horrors and injustice.

Time has insulated us from the violence perpetrated by past regimes in their pursuit of power: the crucifixion and slaughter of innocents by the Romans, the torture of the Inquisition, the atrocities of the Nazis, the butchery of the Fascists, the bloodshed by the Communists, and the cold-blooded war machines run by the military industrial complex.

We can disassociate from such violence. We can convince ourselves that we are somehow different from the victims of government abuse. We can continue to spout empty political rhetoric about how great America is, despite the evidence to the contrary.

We can avoid responsibility for holding the government accountable.

We can zip our lips and bind our hands and shut our eyes.

In other words, we can continue to exist in a state of denial. Yet there is no denying the ugly, hard truths that become more evident with every passing day.

We cannot remain silent in the face of the government’s ongoing overreaches, power grabs, and crimes against humanity.

Evil disguised as bureaucracy is still evil. Indeed, this is what Hannah Arendt referred to as the banality of evil.

As I make clear in my book Battlefield America: The War on the American People and in its fictional counterpart The Erik Blair Diaries, such evil happens when bureaucrats (governmental and corporate) unquestioningly carry out orders that are immoral and inhumane; obey immoral instructions unthinkingly; march in lockstep with tyrants; mindlessly perpetuate acts of terror and inhumanity; and justify it all as just “doing one’s job.”

Such evil prevails when good men and women do nothing.

By doing nothing, by remaining silent, by being bystanders to injustice, hate and wrongdoing, good people become as guilty as the perpetrator.

There’s a term for this phenomenon where people stand by, watch and do nothing—even when there is no risk to their safety—while some horrific act takes place (someone is mugged or raped or bullied or left to die): it’s called the bystander effect.

It works the same whether you’re talking about kids watching bullies torment a fellow student on a playground, bystanders watching someone dying on a sidewalk, passengers on a train filming a fellow traveler be raped without intervening to help, or citizens remaining silent in the face of government atrocities.

We need to stop being silent bystanders.

It’s time to stand up for truth—for justice—for freedom—not just for ourselves but for all humanity. Tomorrow may be too late.