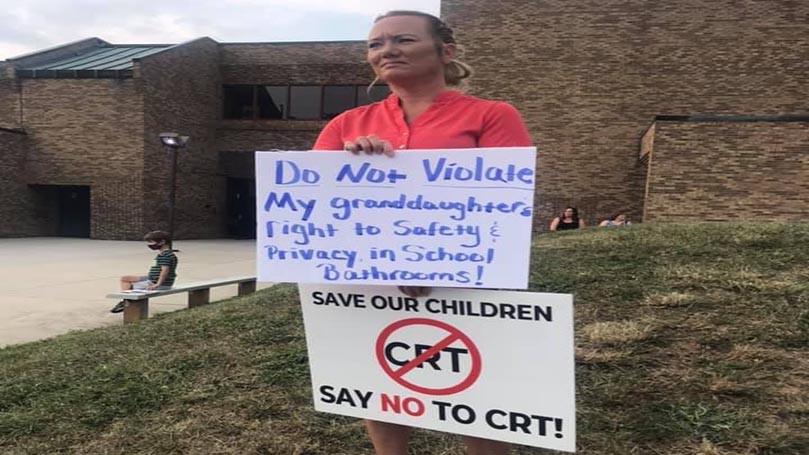 For years the right wing of the U.S. political ecosystem has been getting pushback from several quarters: Occupy, Black Lives Matter, the women’s marches, and climate marchers are a few examples. To reassert their power, the Republican Party decided to focus on taking over state legislatures and governors’ offices, and through extreme gerrymandering, stay in power. They have been wildly successful, and now the GOP controls the legislative and executive branches of 23 states.

However, with the loss of the presidency and the country’s demographics moving away from predominantly white, desperation seems to be setting in. In response, they are ramping up the fight for ideological ground and taking the battle to another arena: the local school board. And now our nation’s school board and PTA meetings resemble political rallies more than educational debates.

Just outside Washington, D.C., Loudoun County, Virginia, is one of the most affluent counties in the country, but it has lost its historically white majority due to an influx of Central American immigrants over the past few decades. Because of the extreme affluence of the defense contractors, bureaucrats, CEOs, and neo-Confederates in this area, Loudoun has become a nationally broadcast battleground in the fight to maintain the myths of American exceptionalism, rugged individualism, and white Christian supremacy.

At the June 22 meeting  of the Loudoun County Board of Education, these right-wing elements mobilized and mobbed the meeting in a confrontation that made national news and came close to being a violent confrontation.

Then at August 10 school board meeting, conservative speakers compared the school board to historical villains ranging from King George III to Adolf Hitler; one woman went so far as to exorcise the board in the name of Jesus. A conservative arrested for violence at the previous school board meeting spoke remotely from home, suggesting that major legal challenges to the board’s authority were underway. So far, recall campaigns for several board members have begun but without much success or actual momentum.

Besides mask wearing, the latest school board meetings have focused on two primary issues. The first is trans rights, a very real issue of liberation which has been aided by the successful implementation of Draft Policy 8040, which will ensure that all students will be referred to by their chosen name and pronouns, with access to the facilities, sports, and programs that correlate to their gender identity. The second issue is the teaching of critical race theory (CRT), a fake issue driven by right-wing propaganda with the immediate goal of preventing students from engaging in educational discussions about racism in America. Long-term, the GOP is using this issue as a dog-whistle to galvanize their voters and win elections in 2022.

When our Virginia district of CPUSA sent two representatives to give official statements remotely, we coordinated to cover more topics and ensure that we didn’t present the same exact statistics. Transphobic speakers rallying against 8040, however, all used the same misleading statistic about detransitioning that has been widely demonstrated to be false. This fits with the tradition of conservatives being able to elevate empty rhetoric and outright lies by using big money and nationalist imagery.

Our first speaker and chair of the Virginia Young Communists League, Wren Wilson, gave this statement on 8040:

I am a nonbinary college student. I am also the chair of the Virginia Young Communists League (YCL), here representing the Communist Party of Virginia. As a nonbinary student myself with many trans, nonbinary, and gender fluid peers, I can imagine the impact that it would have if my school were to disrespect or ignore my identity. That is why I am here to encourage you to vote ‘yes’ on 8040 to support transgender and gender-nonconforming rights.

The top cause of death in children is suicide, and the risk of suicide is increased exponentially among young LGBTQ+ folks. This risk goes up the less support that they get from family, friends, and institutions around them. Voting yes on 8040 will give the youth the support that they need to carry on and feel safe in their own schools, and in their own skin.

Our second speaker and editor of the VACPUSA website, Joel Cornell, gave this statement on CRT:

I’m a parent in Sterling, speaking officially for the Virginia district of the Communist Party in unanimous support of 8040. But now, sadly, thanks to Chris Rufo and his ilk, I have to address CRT. When Google searches for this obscure legal term skyrocketed, Rufo decided to take credit for the sudden spike in March, saying their goal was to “[drive] up negative perceptions [of CRT]. We will turn it toxic, as we put various cultural insanities under that brand category. Our goal is to have the public read something crazy in the newspaper and immediately think ‘CRT.’”

This debate is bad faith propaganda; so of course it worked! States are banning discussions of race in schools, including any mentions of slavery, civil rights, and even MLK Jr. It’s clear that antiracism teaches kids not to hate themselves, but to hate the systems of oppression which, in America, are proven to be based on race. We urge the school board to teach the facts of history to our kids, and condemn this ahistorical agenda by ensuring that racism isn’t allowed to change the facts taught in the curriculum.

As the fascist propaganda sets in, those most susceptible to right-wing extremism have been using violence and aggression at these usually peaceful meetings, which have sometimes degenerated into unlawful assemblies. At the most recent school board meeting, when 8040 passed 7-2 as expected, unvaccinated protestors weaponized their masklessness by intentionally invading personal space when the state had abandoned its mask mandate. While it’s easy to counter the fascist narratives, millions of dollars are being spent to give conservative activists the time and resources they need to fight for fascism. This is a fight we can win, but it will take a coordinated effort in which we show up for each other and draw in others who aren’t actively engaged on one side or another.

The right-wing has taken up the mantra “politics is local”; progressive forces must do the same.