The F Words, by Barbara Gregorich 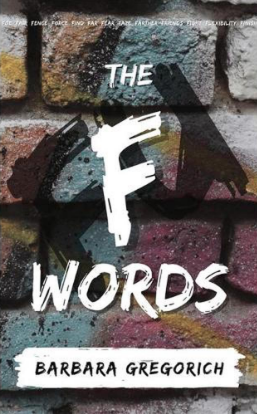 Barbara Gregorich is a writer and long time anti-capitalist in the US. She and her husband were interviewed for Redline about the social movements of the 1960s. Her latest book The F Words, has been reviewed by Guy Miller for Redline.

The F Words by Barbara Gregorich bears the stamp of YA, a Young Adult novel. Those initials, YA, put me on my guard. I approached the book with a degree of suspicion. I don’t remember ever having read a novel so designated. From its first page The F Words takes you inside the protagonist Cole Renner’s head. By page five my guard dropped and my suspicion faded away. I discovered that inside Cole’s head was a good place to be.

The novel begins with Cole spray painting the F word, the BIG F word, on the wall of his high school, August Mersy High. Cole is pissed. His father, Hank Renner, has just begun his 4 month sentence in Cook County Jail. Hank was busted several months earlier for leading a sit-in at a local elementary school, and begins serving his jail time in September.

It was night, and Cole thought “tagging” the school wall was a safe bet. It wasn’t. Caught in the act by his English teacher, Mr. Nachman, Cole faced suspension from Mersy and expulsion from his beloved cross-country team. Instead of turning Cole in Nachman offered him a two part deal: Part one: “volunteer” to clean up the graffiti. Part two: Cole remembers it this way, “Another tiny smile flits across Nachman’s face. ‘Call it an F-word assignment. Every week from now until the end of the school year, I want you to look up two F words in the dictionary and write a poem about each’.”

This begins a four month long arc in our young hero’s life. The F Words falls squarely in the tradition of American bildungsroman, or coming-of-age novels.  Two prime examples are: The Adventures of Huckleberry Finn and Catcher in the Rye. Just as in Catcher, Holden Caulfield’s expulsion from Pencey Prep, and in Adventures, Huck’s need to escape his violent father, Cole’s assignment is the precipitating event that brings on a short, but intense period of transition in his life.

“Don’t Mourn, Organize” were the last words of Swedish-American Wobblie activist and song writer Joe Hill. Spray painting the school building was Cole Renner’s way of “mourning” the jailing of his father and organizing is one of the lessons he learns over the next several months.

The Renner family lives in the Logan Square neighborhood of Chicago. It is also the neighborhood that Cole’s father Hank grew up in, giving the book a strong sense of place. Logan Square sits in the middle of Chicago’s Northwest Side. I grew up not far from there and have a vivid memory of Logan Square in the 1950s and early ‘60s.

In those years Logan Square was a solidly blue-collar ethnic neighborhood, with a predominance of Polish residents. It was cheek-by-jowl to gritty Nelson Algren territory. However, it is also crisscrossed with several scenic parkways and boulevards, making it ripe for a certain amount of gentrification. The first wave of new arrivals were Puerto Ricans in the late ‘50s, followed by a much bigger wave of Mexican Americans in the 1970s and ‘80s. The current census breakdown is: 46% white, 44% Latinx, 5% Black and 3% Asian.  Although, it’s a safe bet that Mersy High’s enrollment is more heavily weighted toward people of colour.

Chicago has a number of high schools with German names: Schurz, Steinmetz, and Von Steuben to name three.  After the defeat of the 1848 revolution in Europe Chicago became a mecca for many of its German speaking participants.  They, and, their descendants, were instrumental in the Haymarket Affair which spawned the international holiday of Mayday. August Mersy, was one such radical who lived in Chicago. Mersy High, however, is fictional.

In 2014 the Chicago School District closed 49 elementary schools in the city. Under the tutelage of then Democratic Party Mayor Rahm Emanuel, this was a dagger aimed directly at the militant Chicago Teachers Unions as well as the mostly Black and Brown neighborhoods that were targeted. Public schools in the city often serve as the last glue holding poor communities together.

Euclid Elementary, both Cole’s and his father’s grade school, was scheduled for closure. Hearing this news, Hank Renner, said, “Enough!”, and sprang into action.  We are not given details about the political history of Hank, or Stacey, Cole’s mother. However, it is easy to fill in the blanks. By the vocabulary they use (e.g. “ruling class”) and the actions they take (a penchant for mass action), they come out of a far left tradition. It’s likely their formal membership in any group has lapsed, but their instincts remain.

Armed with those instincts and training, along with a bullhorn, Hank had led a sit-in at Euclid Elementary in the April just before the novel’s action begins. The police needed a fall guy, and Hank turned out to be it. Five months later he was Cook County Jail bound.

Cook County Jail -known to its inmates, unaffectionately, as CCJ – brings on a sense of dread whenever I approach it. Here’s how Barbara Gregorich has Cole describe it when he and his mother Stacey first visit Hank: “It’s a mega-jail like something out of an apocalyptic film. Barbed wire everywhere. My breath comes hard, like somebody’s pressing heavy stones on my chest. I feel sick to my stomach.” Cole continues, “‘largest jail in the United States’, says Mom, watching me, ‘Ninety Six acres’.”

Gregorich chronicles their visit in detail, not sparing any of the small humiliations afforded to both visitors and inmates alike. For example, surrendering shoes, cell phones, wallets etc. and allowing only house keys before seeing their loved ones. The speaker system between prisoners and visitors is set well below eye level, requiring both inmates and their families to bend down to be heard. When their fifteen minutes are up, guards brusquely herd visitors out of the way in a manner more fit for cattle than for humans.

Not all is doom and gloom in Cole’s world. His close friendship with Felipe Ramirez provides a source of strength and support for him. Felipe is the kind of guy you want as a friend. He is known and liked by just about everyone at Mersy High. The two friends bonded in 3rd grade at Euclid, partly due to the accident of the alphabet: R for Renner, R for Ramirez.

While Cole is an only child, Felipe is one of several siblings. Over the years the two families became close enough that all four parents earn the familiar titles of Tia and Tio. With the exception of Felipe’s mother, Veronica, all the Ramirez family are United States citizens. That one exception becomes the focus of the last quarter of The F Words.

I noticed the effortless way the author handles the mixture of Spanish and English when bilingual characters and their friends communicate. In a process called: “code switching,” Spanish words are often inserted into predominantly English dialogue especially when emphasis or emotion are needed.  In fact, although the vocabulary of the entire novel is easily accessible, it always shows a reverence for words and their meanings.

The F Words is set in one of those recent years when the war on immigrants was at its most hysterical in the United States. While the Obama administration set new records for deportations, the Trump years brought an even more visceral hostility toward non-citizens. Immigration and Custom Enforcement, ICE, is the brutal arm of the American government’s war on immigrants. Throughout the novel, ICE agents lurk in the shadows at school and on the street, like sinister avatars.

One of Cole’s and Felipe’s classmates, a Korean named Gi Pak is snatched out of his biology class by ICE and ‘disappeared’ like a victim of Argentina’s dirty war. This galvanizes Cole, Felipe and the third member of, what I think of as the Mersy Political Committee, a female transfer student from Portland, Oregon named Treva Soldat, into organizing a Mersy contingent at an upcoming Immigration Rights demonstration. The rally and march are set to begin at Union Park and then walk a mile and a half to Federal Plaza downtown. Union Park, located in Chicago’s Near West Side, is close to many large union headquarters and is also graced by a statue of James Connolly. Union Park is often the site of large assemblies.

Cole is blown away. The 20,000 marchers are the largest crowd he has ever seen. The art critic John Berger calls demonstrations rehearsals for the revolution. While this may be an exaggeration, they are often the turning point in young activists’ lives. Here is Cole’s breathless take on the rally: “People of all ages here. Younger. Older. Much, much older. People wearing hoodies. Blackhawk jackets. Sox jackets. Cubs jackets. (all three are names of Chicago sports teams)  Brown people. Black people. White people. Flags: Mexican flags. Irish flags. Palestinian flags”. Our boy is clearly impressed!

Meanwhile, ICE has a friend in Mercy’s principal, Ms. Delaney. Ms. Delaney and Cole butt heads on immigration, bullies, who should be class president, and most of all on standardized testing. Results of these soul destroying, mind numbing tests can make or break a principal’s career, and Cole has organized against them. Principals are often not too popular with teachers either. A Chicago high school English teacher friend puts it this way, “Principals essentially are there to do the district’s bidding. From the union’s perspective, they are always testing to see what they can get away with.”

Cole is developing a taste for political action, but he is anything but one dimensional. One of his other passions is the Mersy High cross-country team. More than any other track event, cross-country has a strong team aspect to it. Victories are determined by how the 7 team members place in aggregate. Think of it as another life lesson in team work and cooperation in the “Education of Cole Renner.”

The final pages of The F Words are centered on a crisis that begins when ICE attempts to capture and deport Felipe’s mother, Veronica Ramirez. On the day before Thanksgiving ICE barges through the door of the Ramirez home. Only due to the quick thinking of their guest, Treva Soldat, is Veronica able to escape. Forced to go into hiding, Veronica spends a month in the urban equivalent of the Underground Railroad.

Giving away the ending would spoil the fun of reading this worthwhile exploration of a contemporary American teenager’s coming-of-age. Suffice it to say, Cole does not “Light out for the territories’’ like Huck, nor does he surrender to cynicism as does Holden Caulfield. Neither cynical nor naïve, Cole is going to be alright.

Throughout The F-Words, the author, Barbara Gregorich, has a love affair with words. I can’t help thinking that even the characters’ names were chosen with care. Felipe’s mother, Veronica, has a name derived from Latin roots meaning “True image.” Perhaps Veronica’s persecution is the “true image” of contemporary America.  And Mr. Nachman – who plays a heroic role in The F–Words finale- -has a name that can be broken down as Nacht Man, German for night watchman.‘ Just guessing.

Banned words and racism in schools