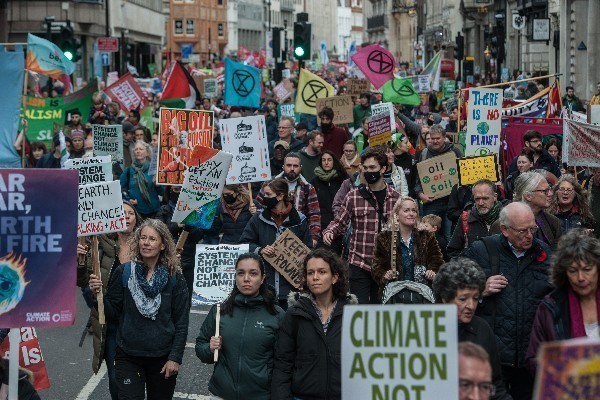 The Cop26 climate conference in Glasgow ended on Saturday having decided to keep the present toxic system in place rather than charting solutions to save human existence.

As climate activist Greta Thunberg said, “Beware of a tsunami of greenwashing and media spin to somehow frame the outcome as ‘good’, ‘progress’, ‘hopeful’ or ‘a step in the right direction’.

“Here’s a brief summary: Blah, blah, blah. But the real work continues outside these halls. And we will never give up, ever.”

The mainstream media reported that Cop26 president Alok Sharma shed tears while he made a grovelling speech apologising for a weakened overall agreement.

He told the conference, “I apologise for the way this process has unfolded. I also understand the deep disappointment but I think, as you have noted, it’s also vital that we protect this package.”

Sharma’s real anxiety was that it was a moment when the inaction baked into Cop26 became too apparent.

The specific was that under pressure from the Chinese and Indian governments, the final declaration had changed from “phase out” the “unabated use of coal” to “phase down”.

That is appalling. But worse was giving no mention of the need to phase down, let alone phase out, the use of oil and gas. Such a statement would have offended the US, Britain, Saudi Arabia and many others—including the giant oil multinationals.

Instead, there was only a call for action against “inefficient fossil fuel subsidies”. Who will decide which ones are inefficient? It will be the capitalist politicians who are bribed and pressured by the besuited figures in the boardrooms.

And in any case, the shift in language about coal was cobbled together by representatives from the US, the European Union, China and India who entered a huddle in the late stages of the conference to agree on the wording. Governments representing billions of other people were not even consulted.

And the phrasing was backed up by US climate envoy John Kerry who said, “You have to phase down coal before you can end coal.”

The conference was supposed to “keep 1.5 percent alive”—the need to keep temperature rises at or below 1.5 degrees above pre-industrial levels. But the rise will be 2.4 degrees if all governments meet the 2030 targets, and 2.7 degrees with current policies.

“If the objective at Cop26 was to keep 1.5 degrees alive, it’s dead,” said Dieter Helm, professor of energy policy at Oxford University.

Cop26 heard pledges to double the money that rich countries give poorer countries for climate adaptation.

But activists from the global south, who are already suffering from catastrophic climate change, say the money is a tiny fraction of what is needed. And they are right not to trust that rich countries will deliver on their promises.

Rich countries did not meet their targets of cash to poorer countries for climate adaptation in 2020.

The British Tory politicians who were tasked what guiding Cop26 are the same ones building new roads, encouraging oil and gas producers and using the latest budget to encourage short-haul aviation. They are enemies of working class people in every area,

Winning real climate action requires a relentless confrontation with the present capitalist system, not working in alleged partnership with its defenders.

Left to themselves the stewards of capitalist accumulation will not carry through even the most basic measures we need.

The real achievement of the days in Glasgow was the rebirth of the movement on the streets, locally and globally.

The Extinction Rebellion disruption in London on Saturday was an appropriate response to the politicians’ insult to the vast majority of the world’s peoples. But we need much more.

Now we require a mass, militant, revolutionary force, based on the power of the working class.

The failure of Marcuse, Adorno, and Horkheimer

Cop26 set to end as failure