The Fight to Save San Francisco’s City College: An Organizer’s View 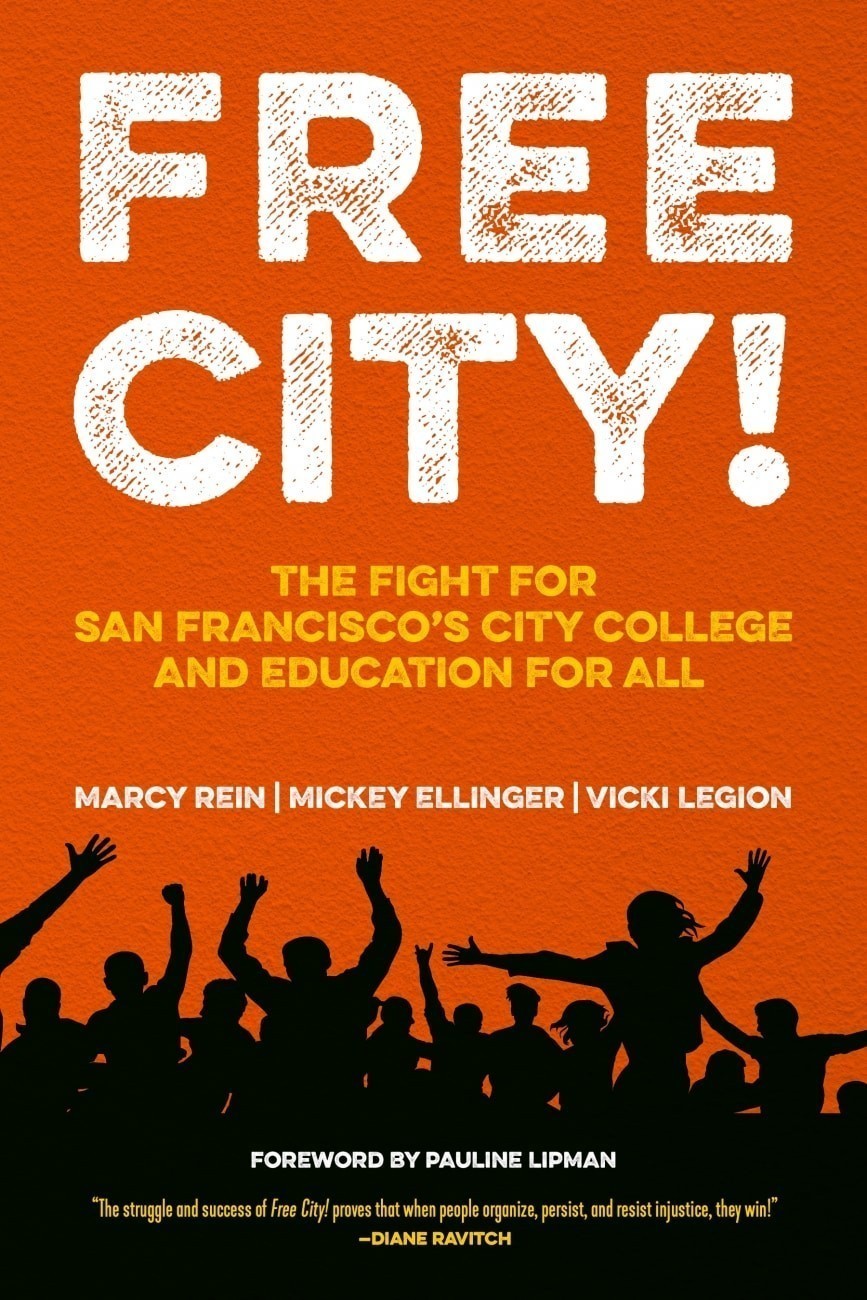 Free City! The Fight for San Francisco’s City College and Education for All is a book for organizers, by organizers. Written from inside the struggle, it is a history of the five-year campaign to save San Francisco’s community college system from being shuttered by a highly politicized accreditation agency. The movement went on to win support and funding for the country’s most inclusive free college measure.

Community colleges are little discussed, dismissed as the lightweight workhorse segment of higher education. But they play a critical role in access to meaningful education, especially for Black, Latinx, immigrant, and other marginalized communities. In 2012, for example, the statewide community college network was home to about three-quarters of California’s Black and Latinx college students, and three-quarters of San Francisco’s City College students were students of color. Under the California Master Plan of 1960, California had built up by far the biggest community college system in the country, which was completely tuition free from 1935 until 1984. Community colleges have played a crucial role in the survival and empowerment of wave after wave of immigrant communities, and have provided nurturing environments for Ethnic Studies, art, music, and other programs that inspire community organization, solidarity, and radical thought and action. It is no accident that the Black Panthers and the country’s first Black Studies courses were born at another Bay Area community college, Oakland’s Merritt College. Efforts to control, privatize, and destroy community colleges are essential components of attacks on liberatory, antiracist education.

As authors Marcy Rein, Mickey Ellinger, and Vicki Legion so clearly expose, the attack on San Francisco’s City College expanded on the script aimed at the privatization, resegregation, and control of K–12 public schools since the Ronald Reagan era. It took years of organizing and strikes for K–12 teachers, Black and Brown parents, and student organizers to break through well-funded propaganda about “school reform.” Democratic as well as Republican administrations blamed teachers and their unions for the “sea of mediocrity” of public education in the United States (rather than centuries of institutionalized white supremacy and underfunding), and pushed standardized testing, scripted curriculum, school closures, and state control as “solutions.” Far from solutions, these neoliberal tactics have resulted in the resegregation of our schools, school closures as a major driver of the gentrification of ever-whiter city centers, the expansion of the school-to-prison pipeline, and the proliferation of for-profit charter schools in lieu of public education as a centerpiece of the democratic commons.

A similar constellation of policies shows up in a corporate agenda to reshape community colleges, put forward by foundations, think tanks, and both Democrats and Republicans. Before the recent efforts to destroy it, City College was in many ways a shining example of community-responsive education—although always woefully underfunded and not immune to the typical problems of academic institutions. It offered college credit and adult education classes to 100,000 students at eleven campuses and some two hundred neighborhood sites, with one out of seven people in San Francisco attending each year. City College had received many of the leaders of the historic Third World Strike at San Francisco State as transfer students, and the college had an exceptional array of ethnic studies and social justice departments and programs. Student support services built up over the years included, among others, child care centers and parenting classes, evening programs for older returning students, programs for formerly incarcerated students, a women’s center, a veteran’s center, and a dozen student-operated resource centers.

The “reformers” turned away from the open access mission of community colleges. They called City College a failure because of the “completion gap”—the difference between the number of students who enter community college and those who complete a certificate or degree. This metric did not account for the varied ways that City College served students and the community. For example, the college’s largest department was English as a second language, essential in a city where two out of five residents were immigrants. But the focus on completion did allow for blaming educators and promoting a new approach, ostensibly rooted in equity. The reformers backed the Student Success Act of 2012, which based community college “success” on degree completion rather than open-door enrollment, prescribed full-time attendance and “on time” graduation, and implemented a dozen new “student push-out policies” to squeeze out part-time students—although 80 percent of students in the statewide system attended part time, and a full 90 percent at City College. The “reforms” virtually eliminated lifelong learners and moved control of curriculum from faculty and elected trustees to the state chancellor’s office.

At an inner-city school like we are, there are going to be many who dropped out of high school, and what are we going to do if we don’t have these other alternatives to keep people going? We’re recognizing that people often go to departments they identify with, at least initially, and our job is to serve as a retention center. These courses can become a foundation to move over into other areas.… Students come through who never even expected they would make it, and something happened during their stay here where the ability to have confidence that they could learn just switched on inside them. I call it “the revolution that takes place in the heart.”

In 2012, the Accrediting Commission for Community and Junior Colleges, a backer of the “success” agenda, gave City College nine months to remedy fourteen “deficiencies” or face loss of accreditation. A year later, the commission announced plans to terminate accreditation, which would effectively shut down the college. California’s accreditation commission had been goaded into a hyper-aggressive stance by a U.S. Department of Education riddled with former corporate lobbyists and staff waiting to take plum positions with industry after their government service.

Faculty, students, and community members organized to save the college. They had to rethink the role and tactics of their unions and organizations, build new alliances, develop the research capacity to understand their opponents, and create a strategy to break through the complicity of the commercial media and some local and state politicians. Free City! charts the ups and downs of their struggle. Along the way, we get to know many of the participants as people as well as activists, and see the impact the fight had on their lives.

The authors—who are educators, journalists, and organizers themselves—are explicit about their goal: to tell the story of the fight to save City College in a way that would help other organizers see the big picture, make connections, and analyze their own situations more clearly.

Building on their own involvement in the fight, the authors interviewed more than eighty students, educators, administrators, and union members. Free City! is a transparent rather than hagiographic history—you can see the problems, you can see the contradictions, you can discuss whether you might have made a different decision at a certain point. So often, social justice histories smooth over the contradictions, precisely the information we need to move forward as movements.

The book elucidates the relationship and tensions among grassroots organizing, lobbying, negotiating, and media strategy. It also makes a strong argument for the role of research. A former president of the California Federation of Teachers wrote a voluminous rolling exposé of the accreditation commission’s misdeeds. Faculty and student researchers exposed the role of the student loan industry in developing the “student success” agenda, and traced the network of think tanks, nonprofits, politicians, and others that disseminated it. They also pinpointed “regulatory capture” at the national level, whereby the for-profit college and student loan industries were able to influence policy through a revolving door of lucrative career opportunities for officials in the U.S. Department of Education.

The authors are also clear about the limits of the victory: City College remains open and free by means of a grueling fight to keep it community centered and focused on education in the broadest sense, but it has lost much of its enrollment. Like Hurricane Katrina for corporate education “reformers” in New Orleans, the pandemic offers a classic disaster capitalism opportunity to continue downsizing the student body and precaritizing faculty, to move courses permanently online as the “new normal,” and to expand the influence and profit of Big Tech.

As Chicago educator and activist Pauline Lipman notes in the book’s excellent foreword:

Demands like “Free College for All” are a critical component of maintaining the cities we love and making them more inclusive, more public and collective, and more just. But, as Free City! shows, this is a battle against powerful forces of racial capitalism, and political clarity is critical. Clarity about who the enemy is and strategies to not only resist but to unite across our multiple experiences and structural differences (of race, class, gender, sexuality, immigrant status) to transform defensive demands into proactive campaigns. A key piece is systematic reflection on actual struggles for justice by those who are deeply involved and opening them up to scrutiny in ways that help us all develop more political clarity.

This is the great strength of Free City! as a book. It is a riveting story. But, most importantly, it is an invitation to make connections to other struggles, to rethink strategy, to re-envision goals.

Maoism: Organizer of defeats around the world