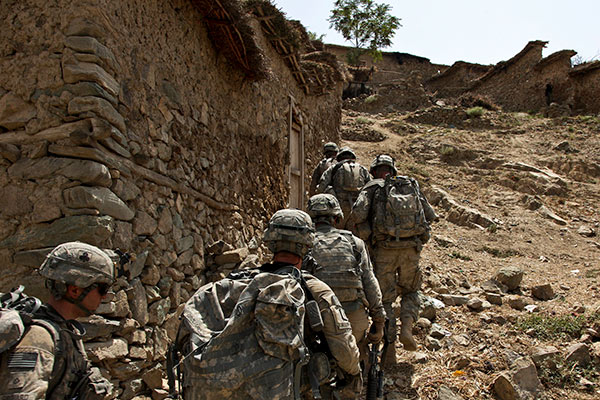 Contractors worked in the US killing machine in Afghanistan (Pic: US Army)

While British and US politicians shift uncomfortably as they try to explain the Taliban recapture of Afghanistan, one group of people has emerged largely unscathed—the heads of private “contractor” firms.

Paid for largely out of military budgets, these firms have made a killing in Afghanistan, and their bosses hoped the military occupation there would never end.

The Intercept website reports that rich stock market investors also pocketed huge profits. Someone who bought $10,000 of stock evenly divided among the US’s top five defence contractors when the invasion began and reinvested all the dividends, would now be looking at $97,295.

This growth far exceeds the general rise in the stock market.

After troop numbers started to fall in 2013 that figure fell rapidly. But as late as a few weeks ago there were still almost 17,000 contractors working for the US military alone in Afghanistan.

The Pentagon paid their employers some £136 billion, over the eight years to 2019.

And every other Nato power with troops in Afghanistan had their own contracting firms.

For politicians, there were clear advantages in using them. Operating without accountability, these businesses allowed governments to claim that military forces were withdrawing while keeping large numbers of people on the ground.

It also meant that the deaths of those performing military roles, but working for private firms, were not counted among the military “war dead”.

The Military Times news site used Afghanistan civilian staff casualty reports to paint a picture of contractors who died there.

It reports they were “predominantly white men in the 40s who choose contracting as a second career. Most are veterans with significant military experience.

“Many are former officers and about half are Special Forces veterans.”

But Military Times also reports that the industry routinely uses veterans from countries other than the US and Britain. They have examples of former fighters from Peru, Colombia and Uganda.

It has also been revealed that industry has also used former child soldiers from Sierra Leone in west Africa.

Contractors are very efficient lobbyists, and recruit people with inside knowledge.

An investigation by Mandy Smithberger found that from 2008 to 2018 at least 380 high-ranking US officials and military officers became lobbyists, board members, executives, or consultants for defence contractors within two years of leaving the military.

Lloyd Austin, the current US secretary of defence, grabbed much as £1.25 million worth of stock as a director of Raytheon, the country’s second-largest defence contractor. That was in the four years between retiring from the army and assuming his current post.

In the wake of their Afghanistan defeat, the US and British ruling classes will have to think hard before embarking on another potentially lengthy military occupation.

But somewhere in the shadows there will be bosses who lick their lips whenever they hear the words “humanitarian intervention”.