The Fragility of Order 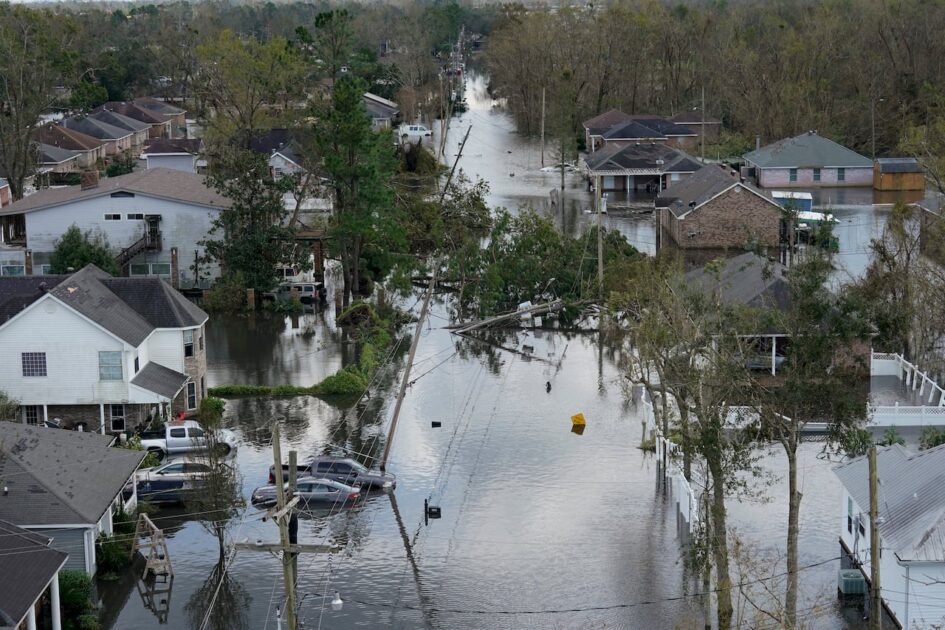 Homes are flooded in the aftermath of Hurricane Ida in LaPlace, La., on Tuesday. (Gerald Herbert/The Associated Press)

Most of us fall into our daily routines fairly easily with little thought. We rise in the morning drink our coffee eat a little breakfast and head off to work. Pulling out of our particular driveways we navigate well-lit and organized streets that efficiently (for the most part) take us to our destination and return us home in the evening. After work we engage in a multitude of various events, hobbies, and sports etc. till our days wind down to a restful or restless sleep.

This same or similar middle class existence is the goal of a large segment of American society. Though we clamor on the Right and Left with varying degrees of political outrage over a multitude of issues we seem to take comfort in the predictability of our day to day existence. When we flip on the light switch, we expect illumination.

Here, along the Gulf Coast, there were similar expectations going in to the last days of August this year. Whether the Native American fisherman headed into the bayous for the days catch or the business executive who organizes his world at a downtown New Orleans office plaza the expectation of normalcy was understood. Unfortunately, for many the area’s residents, the month of August would come to a close in the dark.

August 29th is a date seared into the conscience of most south Louisianans. In 2005 hurricane Katrina rolled ashore creating undue havoc, becoming the poster child for climate catastrophe and government ineptitude. For those who lived through that time of disruption and dislocation, a nagging sense of déjà vu would come with the dawn of August 29th, 2021.

Hurricane Ida by any metric was a monster of a tropical cyclone. With wind speeds teetering on the edge of category 5, she swept ashore like some mythological behemoth crushing almost everything that stood in her path. For hours on end, battering community after community, she did not lose her hurricane designation before crossing the Louisiana-Mississippi border.

In the wake of such catastrophes there is always a sense of dislocation and confusion. When the winds die down and the water recede you make your way back home or out of hiding often to find your world turned upside down. Chances are if you find a light switch that is still intact, turning it on will bring no illumination or order to the darkness that you find yourself enveloped by.

For those unfamiliar with hurricane recovery and restoration the news accounts of the aftermath of hurricane Ida will give some idea of the scope of the ordeal survivor’s face. Massive destruction over a huge swath of south Louisiana coupled with an unprecedented failure of the region’s utility infrastructure produced a literal wasteland of damaged or destroyed homes. Stretching from the fishing villages of the coast to the suburban settlements in and around New Orleans, Ida’s zone of desolation encompassed the heart of Louisiana’s bayou country.

For far too many, the long days since the storms landfall have brought little in the way of recovery in restoration. Poor families without access to high dollar insurance policies and ignored or marginalized by FEMA find themselves living in tents or in their vehicles. Their homes made uninhabitable by Ida with no direct assistance manifesting itself in the short term, they face an uncertain future with a slim hope based on substantial government intervention.

A step above living in the rough are those who have livable homes with no power relying on portable generators but burning up their few resources in fuel and in the hectic search for available assistance from relief agencies, NGOs, and church groups. As imported linemen struggle to re-energize Entergy’s fractured grid these families look forward to power by the kilowatt hour rather than power by the gallon.

The scale rises steeply from this point as we travel “up the bayou” and up the income ladder. The day after landfall, a local news channel highlighted a well-to-do New Orleans neighborhood that was well on their way to clean up and repair in a matter of hours. No mention was made of the fact that it was a neighborhood comprised of upper six figure homes inhabited by resource rich families. There were no references made to the economic inequities that actually dictate the parameters and speed of recovery.

It is in the wake of such catastrophes that we can, if we choose to look, see the fragility of the societal structure that we rely on. Rich or poor, we have a shared confidence that we can turn the lights on, but in times such as these we see clearly that economic status can dictate how long they will remain off. With local stores closed, it becomes a matter of personal means that dictates how far we can reach beyond our own community to find cold milk or fresh bread or how long we can remain in line to buy gas.

Climate change is for many still just a concept or talking point but for more and more of the world population it is becoming a lived reality. In some mid-west suburb we may be able to pretend that nothing can threaten the ordered existence of the American dream, but for those families in the path of western wildfires or Atlantic hurricanes the illusion is shattered. The buffers are disappearing, and we are faced with the actual fragility of the lifestyles we once expected to continue unabated. The choices we make individually and as a society must be made in the light of the chaos that is the true foundation of life on this planet.

In the wake of hurricane Ida, we here in south Louisiana are afforded again lessons in what can truly be termed the “cost of living.” When we pay our electric bill with the push of a button on our cell phone or laptop we are not afforded the perspective that we gain when we have to wait in a gas line for two hours to buy fuel for our generator. It is times like these, in the silence of demolished communities, when we can most clearly see and hear.