“The future has a Party. Freedom, Democracy, Socialism”: The PCP at 101 years. 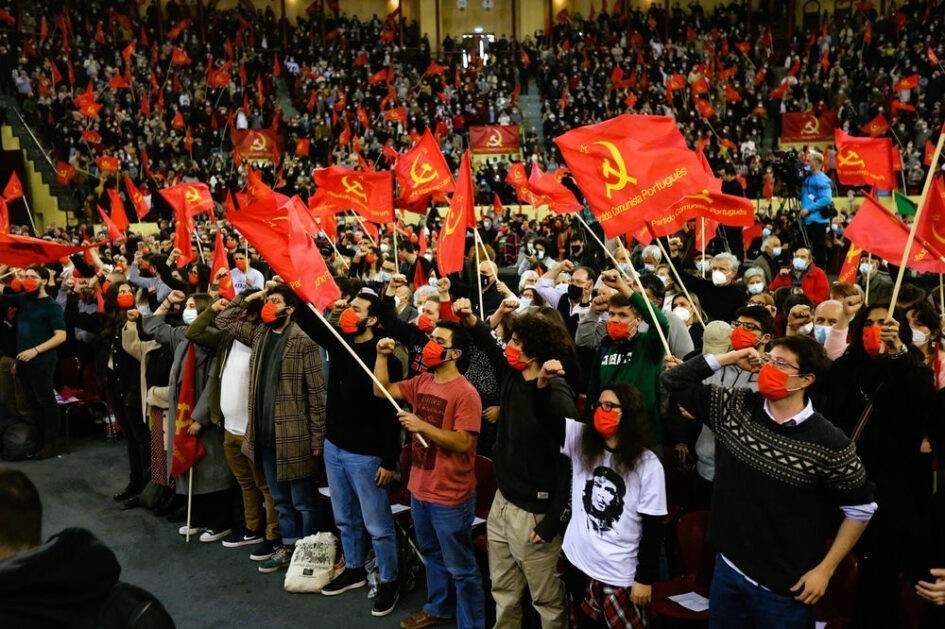 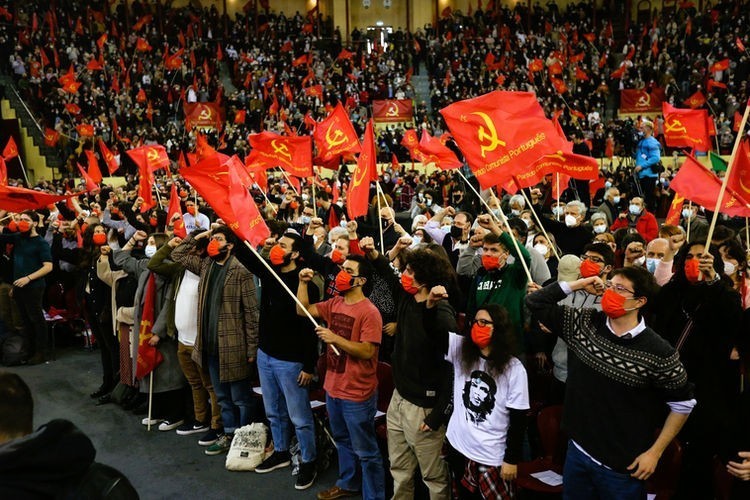 Hundreds of members and supporters of’ the Portuguese Communist Party gathered for a mass rally at the Campo Pequeno in Lisbon on Saturday, March 6 in honour of the 101st anniversary of the party’s formation. The rally was held under the slogan “The future has a Party. Freedom, Democracy, Socialism”.

There were musical performance and a number of speeches including a keynote address by the party’s General Secretary Jerónimo de Sousa.

Ines Rodrigues, a leader of the party’s youth wing, led off her rousing speech by saying:

Our Party has always maintained its commitment to workers, the Portuguese people and youth.

And we are here to transform the world, to rid it of exploitation, to build socialism and communism. This is our future project, that is why we will always be the Party of Youth!

Long live the struggle of youth!

Margarida Botelho, a member of the Secretariat of the Central Committee used her address to note:

In a world with so much inequality and injustice, in which millions of children die of hunger, preventable diseases or war, are condemned to child labour, racism, sexual exploitation, and the status of refugees, fighting for children’s rights is an imperative. The situation in Ukraine requires that every effort be directed to stop the war, to demand a path of dialogue and peace, so that humanitarian support is effective. From here we express our solidarity with all the children in the world who suffer from war and poverty, and renew our commitment to fight to guarantee them a planet of justice and peace.

Paulo Raimundo, also a member of the Secretariat of the Central Committee as well as of the party’s Political Committee said of the PCP:

Here, in our Party, are the greatest fighters for workers’ rights, here are the builders of the future, here are the most committed activists in the fight for peace and against war, because it is peace and not war that is in the interest workers and people.

“With you every day” is not a poster phrase, it is a guide to action in the fight we fight alongside those who work.

A struggle that mobilizes all workers regardless of their religious creed, ethnicity, skin color, sexual orientation or nationality…

Yes, it is the fight against exploitation that we speak of and, yes, we have an intense class struggle. Those interested in keeping things as they are say that this class struggle is a thing of the past, but it is this so-called theory of the past that continues to explain the reality of the present. 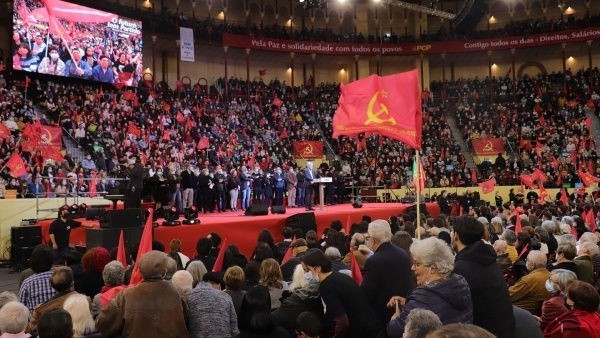 de Sousa looked back over the 101 years of party struggle and pointed to the PCP’s proud history:

This Party is proud to have a unique history within the Portuguese party framework, in defence of the interests of the workers, the people and the country, for freedom, democracy, social progress, peace and national independence.

The only Party that remained throughout almost half a century of fascism acting and fighting uninterruptedly with revolutionary dedication and commitment, despite persecutions, arrests, torture, murders. The only one which did not yield, did not give in, nor renounced the fight. Which boldly dedicated itself to the search and construction of the paths of freedom, pointing the way of the national uprising for the overthrow of the dictatorship.

The Party which made an unparalleled contribution to the exhilarating process of the April Revolution and to the development of the powerful intervention of the working class and the popular masses, transforming military action into Revolution, liquidating the power of monopolies and big landowners and achieving the remarkable achievements of the Revolution, from nationalisations to Agrarian Reform and political, social and labour rights.

The Party that was at the forefront of the struggle, against right-wing policies and in defence of the democratic regime enshrined in the Constitution of the Republic.

The Party which stood up and stands up to the onslaught to destroy the April achievements conducted by PS, PSD and CDS at the service of big capital and keeps alive the fight for the defence and deepening of these achievements against the offensive that aims to destroy them.

Yes, this Party that today closes its Centenary celebrations is the Party of the great causes and of all the fights against exploitation, oppression and inequalities, discrimination, racism and xenophobia. The Party of internationalist solidarity, of peace, friendship and cooperation with all peoples, which steadfastly affirms in its political practice its characteristic as a patriotic and internationalist Party.

We have behind us a century of many struggles, with advances and setbacks, revolutionary conquests and refluxes, but a century marked, at the national and international level, by profound emancipatory achievements that meant advances at the political and economic level and in the fields of social and labour rights of the workers and peoples, including the liberation of peoples subjected to colonialism.

In Portugal we can say that there has not been and there is no advance, achievement, progress that has not counted on the ideas, the effort, the struggle of the communists, of the Portuguese Communist Party, always guided by these ideals of freedom, justice, peace, solidarity and social progress that the communist ideal carries and are inscribed in our actions and project.

That is why we say that the future is built with this Portuguese Communist Party that embraces such ideals and project, because capitalism, with its exploitative, oppressive, predatory and aggressive nature, against which we fight, shows every day that it runs its limits and is unable to solve humanity’s problems.

He went on to talk of the party’s opposition to the war in Ukraine as well as to NATO aggression and expansionism and of the political situation in Portugal itself.

His full address, translated into English, can be read at: Here we are ready to fight the battles of the present and the future – Portuguese Communist Party (pcp.pt)

For a photo gallery of the rally see: Rally: Communist Party Portuguese (pcp.pt)

A video of the full rally has been posted as well:

30th anniversary of the dissolution of the USSR: “Socialism remains the future and the only way out for the people”

Lenin’s Socialism – From the Perspective of the Future

Lenin’s Socialism – From the Perspective of the Future: Some considerations

There Is a Limit to the Tyrant’s Power: Ottawa Freedom Convoy Tears Down Illusion of Democracy in North America