The History between Japan and China 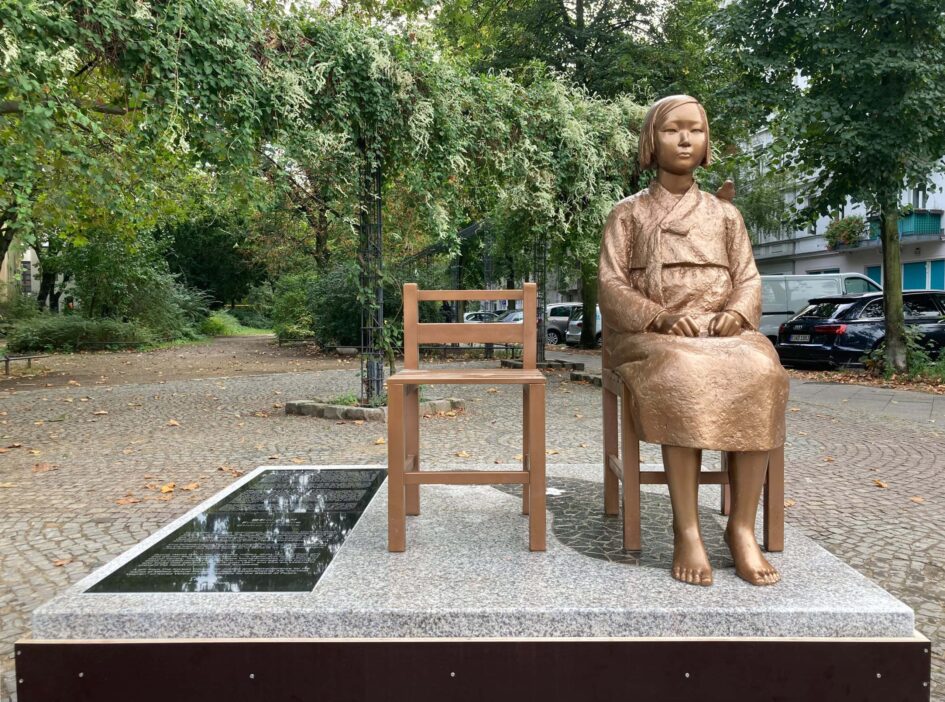 Japan’s actions in a certain period of the past not only claimed numerous victims here in Japan but also left the peoples of neighboring Asia and elsewhere with scars that are painful even today. I am thus taking this opportunity to state my belief, based on my profound remorse for these acts of aggression, colonial rule, and the like that caused such unbearable suffering and sorrow for so many people, that Japan’s future path should be one of making every effort to build world peace in line with my no-war commitment. It is imperative for us Japanese to look squarely to our history with the peoples of neighboring Asia and elsewhere… [emphasis added]

When considering the state of affairs between two nation states, understanding the history of the relationship is critical.

Japan’s current prime minister Fumio Kishida ought to consider Murayama’s advice to look squarely at Japan’s history with neighboring countries. However, before addressing Kishida’s recent demands of China, there are some pertinent questions to consider in the relationship between the two countries?

Has China ever invaded Japan? Sort of. It was back in the 13th century CE, and it was the Mongol Dynasty (aka the Yuan Dynasty) and its Mongolian Emperor, Kublai Khan — the grandson of Genghis Khan, that twice attempted to invade Japan, in 1274 and 1281. The weather gods, however, were aligned against the Mongol Empire as typhoons, known as the kamikaze (divine winds), scuppered both invasion attempts. China was an ally of the US in World War II, a fact that seems to hold negligible currency with the US, as it prefers its defeated enemy, Japan.

Has Japan ever invaded and occupied China? Yes, Japan has invaded and occupied China and committed unspeakable atrocities against the Chinese people. Among the atrocities are the Nanking Massacre (unwrapped by Iris Chang in The Rape of Nanking: The Forgotten Holocaust of World War II, 1997) and the cruel biological and chemical weapons experiments carried out on Chinese by Unit 731 in Harbin, China.

Has Japan ever apologized for its war crimes? Murayama’s prolix non-apology speaks to the evasions of several Japanese politicians whereby Japan as a nation has abjectly failed to take the necessary first step toward atonement for past national crimes. Individual prime ministers have often expressed remorse, regret, sorrow — weasel words that evade saying sorry, which has seldom been meaningfully spoken. What does this mean in a country where apologizing on an individual level is deeply entrenched in the culture? Japan is a society where people profusely apologize for the slightest indiscretion. But on a national level, it is another story. It seems an apology by the Japanese Diet, rather than cleansing the national consciousness, is considered to sully the national image. Thus, the Diet has never officially apologized to the people and nations it victimized during WWII and before. Instead the Japanese government evades any obligation to apologize.

There is, in fact, no serious will among collective Japanese politicians to apologize. This is clear on many levels. Japanese leaders, to the consternation of aggrieved nations, still visit the Yasukuni Shrine which houses the kami of Japanese war criminals. History is sanitized. Japanese students are taught a history that elides Japan’s crimes. Japan has even lobbied other governments to remove statues of a comfort woman erected in their jurisdiction — stark reminders of the crimes of the Japanese military. 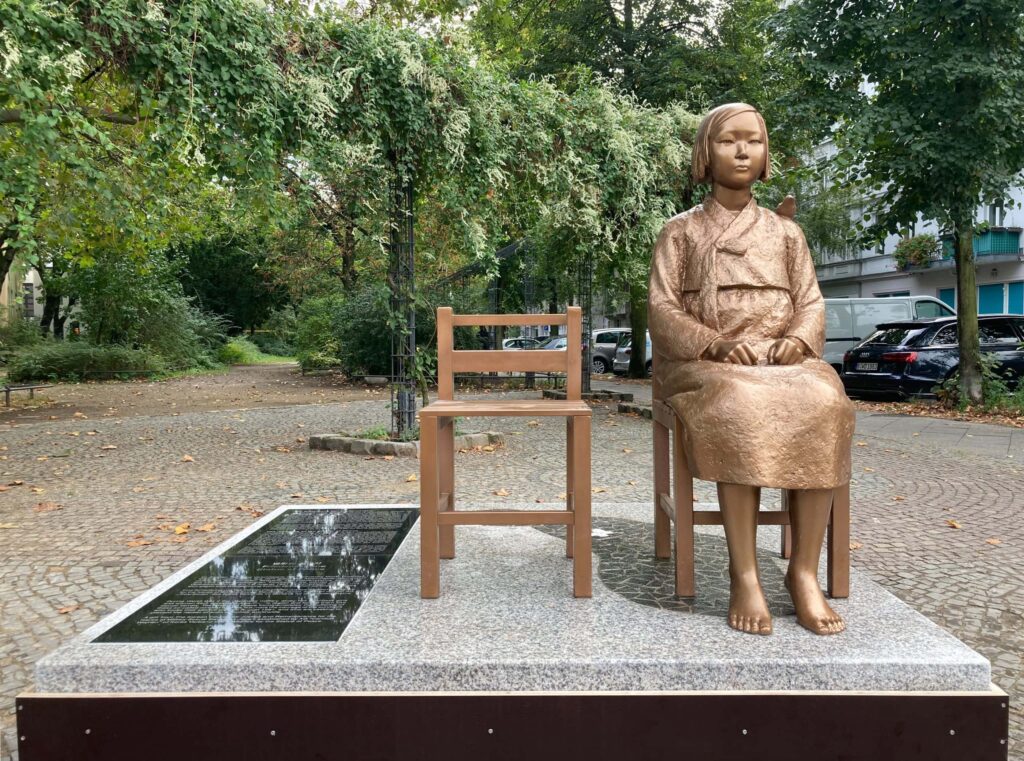 Comfort woman statue in Berlin, a replica of a model placed in 35 countries.

And what has this historical revisionism wrought? There is pressure from the US — contrary to the pacifist American-drafted constitution imposed on Japan — to beef up Japan’s military and even gang up on a formerly victimized country, China.

“It is absolutely imperative for Japan, the United States and Europe to stand united in managing our respective relationship with China,” said Kishida. This is portrayed as “enhancing Tokyo’s U.S. alliance in the face of growing challenges from Beijing.” Given the history, one wonders how it is that China is presented as a “growing challenge” to Japan?

According to Kishida, China is also a central challenge to the United States. This raises another pertinent question:

Have the US and Europe ever invaded China? Chinese remember how the US, Europeans, Russians, and Japanese effected the Century of Humiliation for China. Britain would impose the first of the unequal treaties on China following the First Opium War and assume control over Hong Kong. Other unequal treaties forced China to make concessions to the Portuguese, French, Germans, Russians, Americans, and Japanese. With this history in mind, why is it that China is presented as a threat by the victimizing countries? What are astute thinkers to conclude about the current propaganda targeting China by the western-allied bloc?

US president Joe Biden is on side with the alarmist tone of Kishida, and he commended Japan’s recently announced “historic” defense build up.

China’s vision for the international order differs from the views of Japan and the United States in some ways that the allies “can never accept,” said Kishida. This seems puzzling because China calls for multipolarity. The international order for Japan, however, is not about reducing power asymmetry among nations.

Japan’s acquiescence to a lower ordered rank is revealed by never having rid itself of the lingering vestiges of occupation — a stark reminder of its defeat in WWII. Seventy-seven years later, US military bases are still situated throughout Japan, especially in Okinawa much to the chagrin of Okinawans.

Depending on which source one trusts, the US has 750 to 900 military bases around the world. This is the international order that Kishida speaks of, an order that adduces US hegemony. China, on the other hand, rejects hegemonic status.

Kishida complains of China’s rejection of unipolarity. “China needs to make a strategic decision that it will abide by established international rules and that it cannot and will not change the international order in ways that are contrary to these rules.”

Kishida’s “shameful subservience to the US” (as Dmitry Medvedev, deputy chairman of the Security Council of Russia, put it, according to the Guardian) is odd considering that the US is the country that firebombed Tokyo and dropped nuclear bombs on Nagasaki and Hiroshima. Yet, one can deduce from Kishida’s words that Japan accepts being a vassal of the hegemon.

Nonetheless, the tides of history have begun to erode the “international order.” China, Russia, India, Turkey, Iran, and other countries are no longer willing to exist as second-class nation states.

Splits in the German Capitalist Class: Reflections on the World Inter-Imperialist Rivalry Between the USA and China