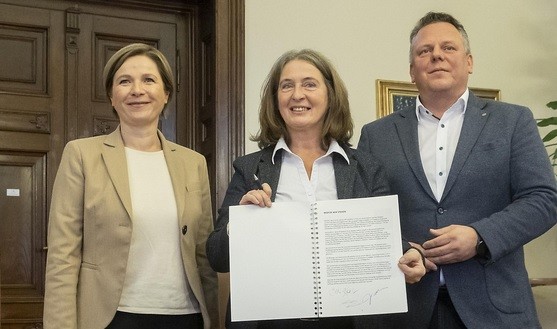 On 17 November Elke Kahr, chair of the Communist Party of Austria (KPÖ) Graz, was confirmed as Mayor in the constituent session of the Graz Municipal Council.

Already on the previous Saturday she, together with Green Vice-Mayor Designate Judith Schwentner and the Social Democratic (SPÖ) spokesperson in the Council Michael Ehmann, presented the coalition programme ‘Together for a New Graz’. The ‘House of Graz’ stands for the transparency ‘of decision-making structures in areas ranging from personnel policy to party and delegation finance’.

Under the header, ‘Together for a New Graz – Social, Climate-friendly, Democratic’, a thorough shift of perspective runs through the 17-page document. Every sphere of activity is conceptualised from the point of view of the majority of the population. That this majority has quite contradictory interests and probably also political positions is well known. Nevertheless, 28.8% of voters cast their ballots for the KPÖ’s class position. The intentions of the new city government seem rather simple, extremely reasonable, and devoid of any verbal radicalism. In the first two paragraphs a positioning is attempted that speaks of ‘injustice’ and ‘exploitation’, which is a completely unaccustomed style in a sphere normally characterised by superlatives and meta-levels: ‘The best of two worlds’, for example, is what unites the Conservatives (ÖVP) and Greens in the federal government – with one party protecting the borders, the other the climate. And the ‘progress coalition’ of SPÖ and Neos (liberals) in Vienna’s state government has a programme teeming with obvious discrepancies, which we only don’t call lies because we have learned that there are alternative facts: ‘the most child- and youth-friendly city’, ‘model liveable climate city’, or ‘Smart City Wien’ were the chapter headings of this project in 2020. At the same time the Vienna SPÖ is sticking to the construction of an Autobahn through the Lobau nature reserve and has up to now spent millions on the promotion of this model due to the asphalt and concrete lobby plus logistics sector, which is anything but child-friendly or liveable, let alone smart. While the previous ÖVP-FPÖ coalition in Graz was supposedly economy-oriented, or to be more precise client-oriented, the present coalition has announced the goal of making the city ‘more friendly, more social, more ecological, and more democratic’ and, already in the first page of the government accord, grounds this in human rights: ‘Each person is equal, each person has the same rights. This conviction is the mission and guiding principle of our daily political action.’ Despite concrete criticism and the evident intention to carry out controls regarding the practice of the ÖVP and FPÖ – the advertising expenses of the city as well as of Holding Graz (an outsourcing of city enterprises) have according to City Councilman Robert Krotzer ‘nearly exploded in recent years and naturally these funds flow only to very specific media concerns’ (Interview in Tagebuch 2021/11) – it is above all the ÖVP that is strongly integrated into government, all the more so that the proportional system provides for this. Two ÖVP city councilpeople will head the offices of Economy and Tourism, Culture and Sports, as well as Youth and Family. This has been justified by the KPÖ through its democratic commitment, for after all the ÖVP did garner 26% of votes. Additionally, there are evident strategic considerations, since both the federal state of Styria and Austria are governed by the ÖVP, and key projects, among them the expansion of public local transportation, can only be carried out with additional funds.

Since it will obviously not be easy to gain an overview of what the finances and financial activity of the city government were under mayor Siegfried Nagl, the idea is to work up to June 2022 with a preliminary budget. The coalition paper contains a commitment to ‘new guidelines’, above all the goal of a ‘balanced budget’. But this is prefixed with a passage that fits the KPÖ’s simple style:

‘We understand the city not as a playground for power-political calculations or as a profitable market for investors. We see the municipality as a service provider to the population, with the central task of guaranteeing affordable basic care.’

In the past the KPÖ was able to build its image through cooperation with social movements opposing concrete projects – against excessive construction projects (U-Bahn, funicular, and a power plant) as well as the attempt to make Graz a venue for the Olympics. In her capacity as secretary of transportation Elke Kahr had already called for sober debate on the question of expanding public transportation infrastructure, in order to meaningfully compare divergent concepts. In the new government accord there is a overarching concept for a complex of issues around mobility, in which unambiguous prioritisations are indicated:

‘For us, an ecological turn in terms of traffic and a city’s quality of life means pedestrians taking precedence over cyclists, over public transport, and over car traffic.’

Among the concrete projects there are certain points that work as both cost-efficient and future-oriented. For instance, at the top of the list is ‘a bicycle for every child in Graz’; also ‘traffic abatement through super-blocks’ (a concept that was enacted in Barcelona); or the ‘creation of fast bike lanes’ which exist in Dutch cities; an ‘expansion of parking-space management’ and the goal of a carfree city centre, as well as the expansion of meeting spaces. Instead of the expensive U-Bahn solution, the orientation is now the expansion of the existing systems of bus, trams, and S-Bahn, in order to reach the greatest number of inhabitants of the surrounding areas where many commuters live.

With her team, the Communist mayor is taking over the Construction and Infrastructure office from the ÖVP, not least in order to continue to work in the area with which the KPÖ is largely identified in Graz: habitation and the promise of building more municipal housing. With the principle of ‘housing first’, models for homeless people are to be developed, which can even fulfil the principle of ‘shelter as a human right’.

The Graz KPÖ has been working for 38 years consistently in order to grow from 1.8% of votes, which Ernest Kaltenegger received in his first campaign in Graz, to the completely surprising electoral victory of 26 September 2021.

The EZLN, the initiators of the alter-globalisation movement in Chiapas, Mexico, have succeeded in establishing a new collective of resistance with a new language and a new narrative since their first appearance in 1994. Many social forums later, a relevant part of the left in Austria remains on the level of wishful thinking or analysis and distances itself sometimes more from new, sometimes less from established communist formations – success is compelling. From a consistently anti-fascist position, for example, Isolde Charim demands a new narrative, <a href="http://” title=”Opens internal link in current window” target=”_blank”>‘another myth’ that ‘is not limited to individual freedom’ ‘. Such a new narrative perhaps necessarily lacks glamour but is at the same time  clearly feminist. The new Graz city government emphasises the wish to ‘unite diversity by living solidarity and cohesion’, together with the many who ‘live and love’ diversely. If feminists from the Communist Party, the Social Democratic Party and the Greens amicably relate to each other within the constituent session of the Municipal Council, then this is a form of cooperation that inspires imitation. We should confidently leave behind a couple of classic pre-determined breaking points familiar to left formations, from autonomous to party organisations, and say goodbye to the practice of always having to find a fly in the ointment and point to an unacceptable formulation. We need a common effort, which is visible in the participation concepts of the coalition paper, in order to work out an adequate language and do politics with, rather than just for, the many.

A Day That Changed Not Only Graz