The Imperialists’ and Proxies’ War against Syria

Review of World War in Syria by A.B. Abrams

On 30 August 2021, the United States’ 20-year military occupation of Afghanistan came to an end when the removal of American forces was completed. Although the withdrawal was botched, it was the correct move. The withdrawal is ignominious because it turns out that the much ballyhooed US fighting forces were, in the end, defeated by Afghan peasants. Has the US learned anything from its debacle in Afghanistan? One might gain an insight into that question by observing the debacle still ongoing in Syria. 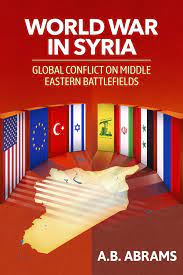 Author A.B. Abrams provides an in-depth analysis on the US-led war in Syria in his excellent book World War in Syria: Global Conflict on Middle Eastern Battlefields (Clarity Press, 2021). WW in Syria documents the lead up to war in Syria, the precursors, the ideologies, the tactics, who the combatants are and who is aligned with who at different stages of the war, the battles fought, the impact of sophisticated weaponry, adherence to international law, the media narratives, and the cost of winning and losing the war in Syria for the warring parties. Unequivocally, every side loses in war. People are killed on all sides, and each death is a loss. But a victor is usually declared, and Syria with its allies has been declared as having won this war, albeit at a great price. However, the finality and clarity of the victory is muddled because Turkey and the US are still occupying and pillaging northern areas of Syria where they provide protection for Islamist remnants (or recklessly guard Islamist prisoners; as I write, the Kurdish-led Syrian Democratic Forces (SDF) and US are fighting to defeat an Islamic State (IS) assault on a prison in northeastern Syria). In addition, apartheid Israel continues to periodically attack war-ravaged Syria.

Abrams asks why the West and Israel were bent on “regime change” in Syria. As Abrams explains, with several examples, nations that do not put themselves in thrall to the US will be targeted for overthrow of their governments. (chapter 1) “Syria was increasingly portrayed as being under some kind of malign communist influence — the only possible explanation in the minds of the U.S. and its allies for any party to reject what the West perceived as its own benevolence.” (p 10)

What is happening in Syria must be understood in a historical perspective. (p 55) Abrams details how imperialist information warfare brought about violent overthrows of socialistic governments in Indonesia, Yugoslavia, Afghanistan, and Libya. That tested template has now been applied to Syria. (chapter 2)

Abrams identifies four casus belli for attacking Syria: (1) being outside the Western sphere of influence, (2) to isolate Syria from Hezbollah and Iran, which would appease Israel and the Gulf states, (3) to remove Iran and Russia as suppliers of natural gas to Europe, (4) to isolate Syria geo-politically from China, Russia, North Korea, and Iran, and (5) a new base for foisting Islamist (“Islamist” is used to refer to a political ideology rather than the faith of Muslims) groups against Western-designated enemies.

So Syria found itself beset by a multitude of aggressive foreign actors: key NATO actors Britain, France, the US, and Turkey. Jordan, Cyprus, Turkey, and Israel were staging grounds for attacks. (p 99) The Sunni regimes of Saudi Arabia, Qatar, and the United Arab Emirates were also arrayed against Syria. At first, the mass protests — given fuel by Bashar Al Assad’s neoliberalism schemes (p 35) — served as a shield for covertly supported military operations. (p 107)

These state actors supported several Islamist entities. Abrams, who is proficient in Arabic, adroitly elucidates the complex and realigning web of Islamist proxies. Among these groups are Al Qaeda, Fatah Al Asram, Absay Al Ansar, the Free Syrian Army (FSA), and IS.

Syria would not be completely alone as fellow Axis of Resistance members Iran and Hezbollah would come to the aid of Syria. Hezbollah directly joined in the spring of 2013 and it played an important role in the pivotal capture of Al Qusayr. (p 132) Thereafter, Iran would step up its involvement in defense of Syria. (p 134)

What will be a surprise to most people is the solidarity shown by the Democratic People’s Republic of Korea (DPRK) toward its longtime partner Syria. (Albeit this is no surprise to readers of another of A.B. Abram’s excellent books, Immovable Object: North Korea’s 70 Years at War with American Power. Review.) Gains made by the invading forces would be substantially rolled back with the entry of Russia, an event deplored by some leftists. Among the reasons for a Russian entry was fear of Islamist terrorism approaching its frontier.

With the advancing tide of the Syrian Arab Army (SAA) and its allies, Westerners reacted by pressing for the establishment of a no-fly zone in Syria. However, having learned from Western manipulation of such a United Nations Security Council resolution during the war on Libya, in which Russia and China had abstained, Russia and China would veto any such attempt this time.

The enemies of Syria would engage in manufactured gas attacks abetted by disinformation. This pretext led the US and allied attackers to grant themselves the right to bomb Syria. Abrams responds, “It is hard to find a similar sense of self-righteousness and open willingness to commit illegal acts of aggression anywhere else in the world.” Abrams connected this extremism to “the ideology of western supremacism.” (p 174) Syria would relinquish the deterrence of its chemical weapons in a futile effort to forestall any future opposition-contrived chemical attacks attributed to it.

Although Hezbollah, Iran, the DPRK, and Russia were invited by the government of Syria, the western nations (without UN approval) were illegally attacking Syria. Among them were Australia, Belgium, Britain, Canada, Denmark, France, and the Netherlands, and Middle Eastern actors which included Bahrain, Jordan, Saudi Arabia, and the UAE. (p 197) Israel was abetting Al Nusra. (p 199) The Syrian borders with Jordan and Turkey were supply conduits for the Islamists. (p 203)

The US planned to create safe zones in Syria with an eye to dismemberment of Syria. (p 204-207) Russia would up the ante, killing 150 CIA-backed Islamists in airstrikes, which the US criticized. (p 221) In apparent reprisal, an IS terrorist attack would down a civilian airliner over Egypt killing 219 Russian civilians. War is a dirty endeavor. Among their other crimes, Islamists used civilians as shields, poisoned water supplies, and carried out beheadings. American war crimes included using depleted uranium and white phosphorus (p 301).

With the US and Turkey competing to occupy land from the collapsing IS, the SAA was pressured to advance as quickly as possible in its lands.

Aside from internecine fighting among the Islamists, there were puzzling complexities described between different combatants. Turkey and the US were sometimes aligned and sometimes at loggerheads; the same complexities existed between Russia and Turkey (“a highly peculiar situation reflecting [Turkey’s] pursuit of both war and rapprochement separately but simultaneously.” p 348), and between Russia and Israel. Of course, given past and current history, any enemy-of-my-enemy alliance between Israeli Jews and Arabs against a fellow Arab country will certainly cause much head shaking.

Despairingly, the UN was also condemned for bias and being complicit in the western attempt to overthrow the Syrian government. (p 334)

Abrams criticized the American arrogation of the right to attack. He warned, “This had potentially highly destabilizing consequences for the global order, and by discarding the post-Second World War legal prohibition against crimes of aggression the West was returning the world to a chaotic order that resembled that of the colonial era.” (p 383)

In toto, Abrams finds, “Even though Syria prevailed, the West was able to achieve its destruction at very little cost to itself … meaning the final outcome of the war still represents a strengthening of the Western position at Dasmascus’ expense.” (p 384)

A book review can only cover so much, and there is much ground covered in WW in Syria. Particularly conspicuous is the annex at the end of the book entitled “Israel’s War.” (p 389-413) This annex leads one to ask why there are no annexes on America’s War, Turkey’s War, Qatar’s War, Saudi Arabia’s War, UAE’s War, NATO’s War, or even the terrorists’ War. Why does Israel stand out? Prior to the recent invasion of Syria, it was only Israel that was occupying Syrian territory: the Golan Heights, annexed following the 1967 War, and recognized as a part of Israel by president Donald Trump in 2019 (quite hypocritical given US denunciations of Crimea’s incorporation into Russia). Syria does not recognize Israel, and it has not reached a peace agreement with Israel. Of Syria’s Middle Eastern allies, Iran does not recognize Israel; Lebanon signed a peace treaty with Israel under Israeli and American pressure, but Lebanon never ratified it. Hezbollah regards Israel as an illegitimate entity. Hezbollah is noted for the first “successful armed resistance on a significant scale to the Western-led order after the Cold War’s end” in 2006. (p 39) Thus, Israel views the arc from Iran through Iraq and Syria to Lebanon as a security threat. Since Israel is regarded by some foreign policy wonks in the US as its aircraft carrier in the region, that reason among others secures US “aid” and military support. That Syria will not bend its knees to US Empire is also a source of consternation to imperialists. After Egyptian president Anwar Sadat treacherously broke Arab solidarity, (p 21-26) Syria would find itself increasingly isolated. Given the rapacious nature of imperialism, Israel and its lobby have faced no serious opposition from within the imperialist alliance, allowing the Jewish State to pursue its plan for a greater Israel to which Syria, a country that does not threaten any western nation, is an impediment. Israel, writes Abrams, will continually seek to degrade the military capabilities of countries it designates as enemies. (p 406)

The situation in Syria still simmers. Those who scrupulously read the dispassionate account of WW in Syria will gain a wide-ranging insight into what underlies the simmering. It will also be clear why any attempt by western imperialists and their terrorist or Islamist proxies will not succeed in a coup against the elected Syrian government. Syrians will put up a staunch defense. Hezbollah and Iran will stand in solidarity, as will the DPRK. Having Russia, a first-rate military power, presents a powerful deterrence. In addition, China, no pushover itself, stands steadfast in support of its Russian partner. Thus the western imperialists’/proxies’ main goal has been thwarted; they have been shamelessly reduced to pillagers of oil and wheat and occupiers of small pockets of a sovereign country.

Vijay Prashad: How the imperialists couped the world in the 1960s