The Importance of Revolutionary Language 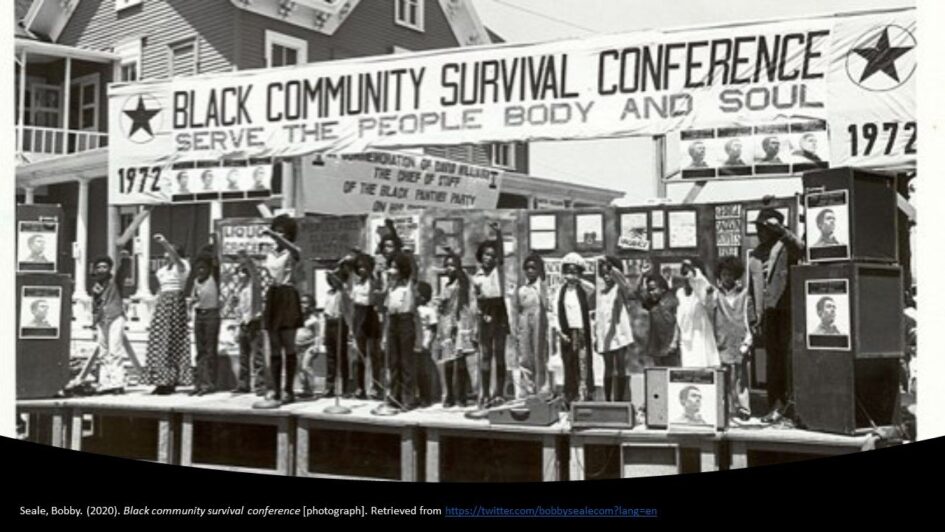 This article was written by Thai Hill.

Organizations and individuals that are guided by Black (Afrikan) revolutionary theory and practices need to be mindful of the language we use — as language is one of the first means by which liberalism attacks. If we are not intentional in aligning our language with revolutionary action and organizing it is liable to be co-opted by the state. Even the most radical of theories such as prison and police abolition can be twisted and watered down by politicians, news outlets, and infiltrators — to the point that they are no longer recognizable.

This concept was demonstrated with the onset of the Covid-19 pandemic as media platforms, organizations, and individuals used the language of “Mutual Aid’’ to describe communities organizing to meet their needs while the amerikan state left them to die. However as the pandemic continued, the language of “Mutual Aid’’ was used so loosely that it often lost connection with radical action, organizing and political analysis. California pigs even went so far as to claim officers from neighboring counties were offering “Mutual Aid ‘’ to the Oakland Pig Department by helping to put down the uprisings of the summer. As many organizers used the language of “Mutual Aid’’ they failed to connect grassroots efforts to protracted (ongoing) struggle and historical context. There was not enough effort made to connect the term “Mutual Aid” to the next phases of organizing that are necessary to destroy capitalism and white supremacy — the systems that make mutual aid necessary in the first place. The language we choose to describe our struggles must contain material analysis of our conditions that points the masses to action — to revolution.

To contrast this we can look to the language put forth by the Black Panther Party (BPP) to describe a similar concept to “mutual aid”. The BPP organized “Survival Programs Pending Revolution” (commonly referred to as “Survival Programs”). Survival Programs ranged from free breakfast, to legal support, medical care, and nearly everything in between. Similar to many of the mutual aid projects we see at this moment. The BPP explicitly stated that without people, there could be no revolution — and there would be no people if they could not survive. Hence the need for Survival programs.

By choosing pointed, intentional language, the Panthers were able to contextualize their actions in the minds of the people — it was understood that this free meal was a step towards revolution. At all points of action the end goal was revolution. Additionally, the term “Survival Program” was an indictment of capitalism and the white supremacist state. The word “survival” itself made it clear that Black folks were dying — that they were under siege. The term “Survival Program” is much better guarded against state co-optation because for the state to wield such a term would be to admit that Black people are experiencing genocide at their hands.

To understand the need for decolonization is to understand our current position as colonized peoples just as to understand our need for survival is to understand our current position as a people in danger. Both the terms “Survival Program” and “Decolonization Program’’ contextualize our current conditions into a history of anti-Afrikan colonial terror, and our next steps into a future of revolutionary action. It is key that we Afrikans understand that we are colonized and merely surviving. This understanding is not to depress us or inspire pessimism — but it is impossible for us to reach our destination if we do not understand where we are. We cannot embrace revolution until we recognize that we are colonized survivors and have been since the first stolen Afrikan was brought to this land. Until that understanding is reached we are open to liberal misleadership sold to us by the likes of Black billionaires and other wolves in sheeps clothing. We must be in agreement about the need for Decolonization Programs and national sovereignty in order to secure the freedom of all Afrikans across the diaspora.

As we build organizations to help lead the masses we have an even greater responsibility to maintain alignment between our words and our goals. If we as leaders are unclear, the people will only be further misled and confused. The consequences of vague language and unclear leadership can be found here in Oakland. In July, $18 million dollars was diverted away from an increase to Oakland Pig Departments budget — however, due to vague language used by community organizations, politicians, and media this was held as a win for defunding. The joy that followed largely overlooked that OPD’s yearly budget still increased by $9 Million (standing at a staggering $337 Million per year). Furthermore, the spending of the $18 million will still be at the state’s judgement. On July 10th, the Oakland Department of Violence Prevention, a recipient of the funds ‘diverted’ from OPD, participated in a rally with the Oakland pigs spreading copaganda and good press for the department. Already we see how the state plans to spend this money helping to boost the public perception of the police. In the confusion surrounding OPDs effective budget increase, the state was able to funnel money into its own programs, quell community outrage and appear ‘progressive’ by twisting the loose language of “defunding”.

This phenomenon of state trickery amidst “defunding’’ is nothing new. For example, last year during a widespread call for defunding, the Minneapolis school district agreed to community demands to remove police from their campuses, however, it has been revealed that the school district is hiring former police and corrections officers. These agents of the state will perpetuate the same violence onto the students of Minneapolis as the police department did all while appearing “progressive”. The realities of oppression being masked by the illusions of progress is the evil of liberalism at work.The state’s ability to twist narratives and demands is in part the responsibility of individuals who have overstated victories, omitted facts and allowed theories such as “defunding” and “mutual aid” to be separated from their radical lineage.

Amilcar Cabral, a revolutionary of Guinea-Bissau, stated “Hide nothing from the masses of our people. Tell no lies. Expose lies whenever they are told. Mask no difficulties, mistakes, failures. Claim no easy victories.” As we are guided by revolutionary politics we bare a commitment to revolutionary honesty. In the moments where the state concedes petty resources we need to be transparent with the people and consistently explain that these small crumbs do not add up to victory. We cannot liberalize our language — when we do we are conceding, moving the goal post, accepting the short end. Material progress begins with our commitment to our demands and our commitment to our language. We as organizers (in and out of Oakland) need to push the hard lines of the Black radical tradition. We must call for abolition. We must call for revolution.

The life and times of a ‘revolutionary hillbilly’