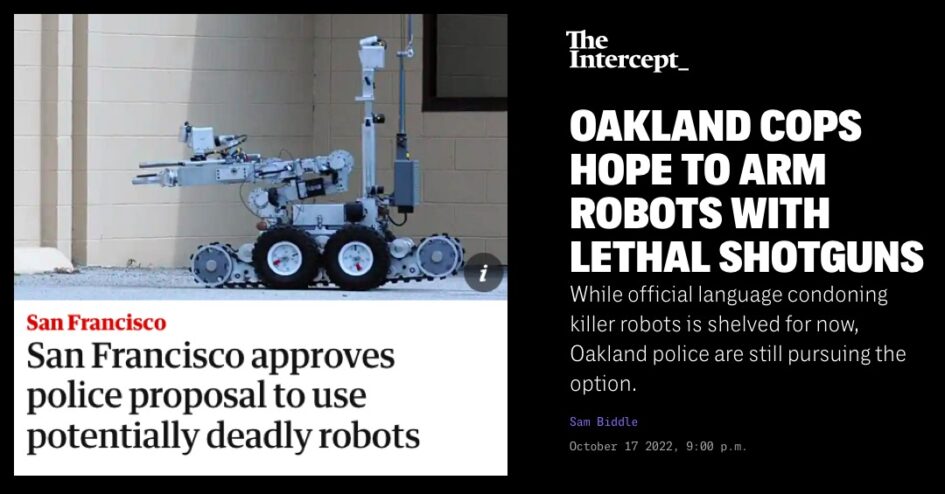 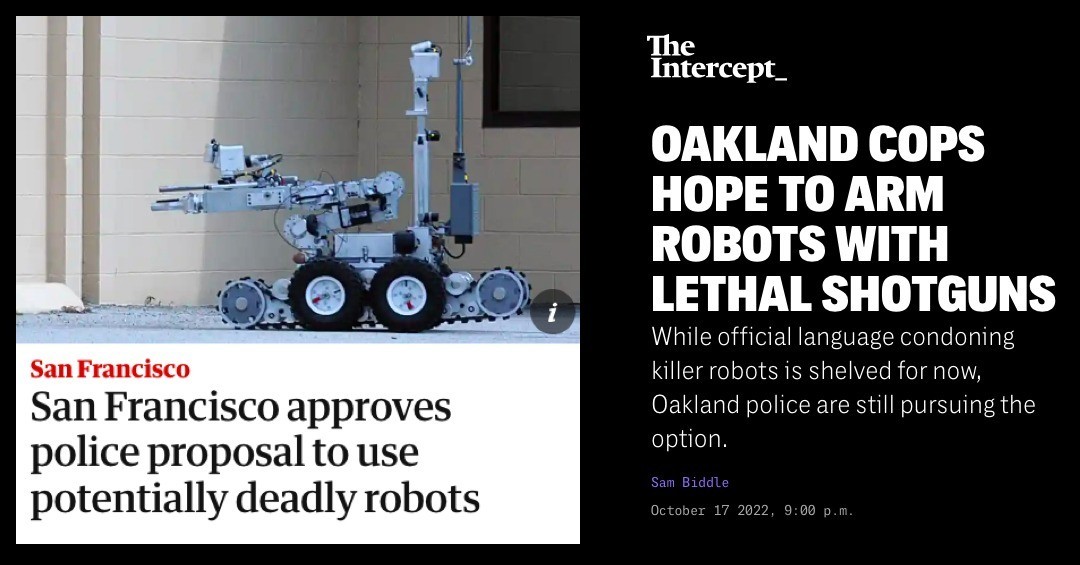 One of the most under-discussed topics in the world right now is how governments have been incrementally pacing the public toward accepting the use of police robots that kill people.

The city of San Francisco has voted to legalize the use of killbots in specific emergency situations like active shooters and suicide bombers, with high-ranking officers making the call as to whether their use is warranted.

“Police in San Francisco will be allowed to deploy potentially lethal, remote-controlled robots in emergency situations,” The Guardian reports.

The controversial policy was approved after weeks of scrutiny and a heated debate among the city’s board of supervisors during their meeting on Tuesday.

“The proposed policy does not lay out specifics for how the weapons can and cannot be equipped, leaving open the option to arm them,” The Guardian reports, adding that the current plan is to equip them with “explosive charges” rather than firearms.

We are seeing more and more expansions in the normalization of militarized police robots, to the point where there are now significant escalations from year to year. Last year I wrote a piece on the way police departments in the U.S. and Canada have been normalizing the use of quadrupedal robots (disingenuously labeled “dogs” for PR purposes) for tasks like surveilling hostage situations and enforcing Covid restrictions. A few months later I had to write another one on this trend because arms manufacturers had begun designing firearms specifically to be mounted on those same quadruped bots. The year before during the 2020 George Floyd protests it was revealed that police had been using drones to surveil demonstrations in U.S. cities, including the Predator drone normally used overseas by the U.S. military.

Now the Oakland Police Department is pushing for the use of robots armed with shotguns. Police have already used a robot armed with a bomb to kill a suspect in Texas. Every year we’re seeing more steps toward the normalized ubiquitousness of unmanned weapons systems for domestic use in western civilization.

It makes sense that the U.S., whose police force is more heavily funded than almost any other nation’s military force, is leading this charge. As John and Nisha Whitehead explain for The Rutherford Institute, this ongoing expansion of police robot militarization tracks alongside the steadily increasing militarization of police forces in the U.S. more generally; SWAT teams first appeared in California the 1960s, by 1980 the U.S. was seeing 3,000 SWAT team-style raids per year, and by 2014 that number had soared to 80,000. It’s probably a lot higher now.

“These robots, often acquired by local police departments through federal grants and military surplus programs, signal a tipping point in the final shift from a Mayberry style of community policing to a technologically-driven version of law enforcement dominated by artificial intelligence, surveillance, and militarization,” write Whitehead and Whitehead, adding,

It’s only a matter of time before these killer robots intended for use as a last resort become as common as SWAT teams.

Like all escalations in police powers and police militarization, the increasingly widespread use of police killbots will be justified in the name of saving lives and protecting law enforcement officers, but will certainly see a rise in abuses of that new power. More importantly (at least in the long term), once armed robots are being used to police civilian populations, the powerful will have made the possibility of a people’s revolution against them far more remote.

Flesh-and-blood armed goons will hesitate to fire upon their countrymen in a domestic uprising. They can be persuaded to side with the people and oust the sitting government. They have beating hearts and aren’t covered in armor. We are still a ways off from AI-guided weaponized robots enforcing the rule of law on our streets, but that does appear to be where we’re headed, and once we’re there it’s entirely possible that the door to revolution will have been bolted shut for good.

If that’s the case, then it’s no exaggeration to say that humanity is in a race between (A) a revolution against the status quo power structures which are oppressing and exploiting us while driving us toward disaster and (B) the ubiquitousness of armed police units. Our rulers keep incrementally pacing us into accepting this in the same way they pace us into accepting internet censorship, whistleblower persecution, and the war on journalism.

So it’s probably important that we do not accept it, and keep shining a bright public spotlight on this freakish trend to keep it from becoming normalized.

“Vladimir the Terrible” Fits the Needs of the U.S. Military-Industrial Complex

‘What is it that needs to be done?’ A conversation with anti-apartheid freedom fighter Lassy Chiwayo