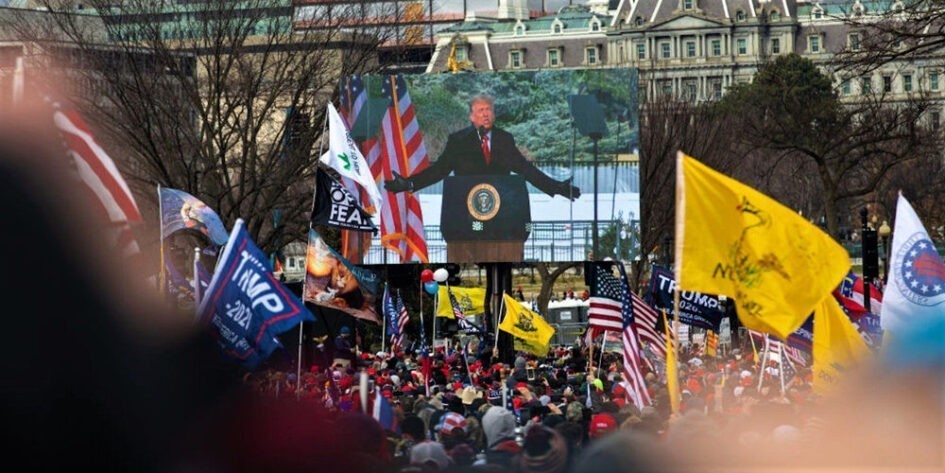 The failed fascist Koup on Jan. 6th, 2021 has quickly become Myth to liberal and conservative regressives as well as the increasingly undiluted American Fash. 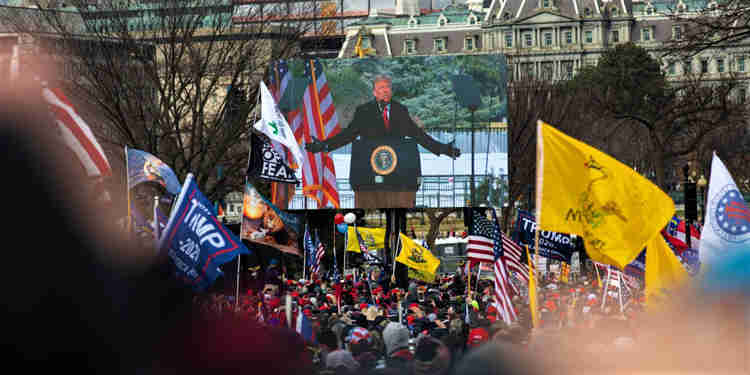 Ever since Trump the White House Ogre embraced the neo-Nazi riots at Charlottesville in 2017, I have regarded his vile tenure as a dress rehearsal for American fascism. The Keystone Koup’s botched launch one year ago today was the culmination of this farce. Trump’s attempted Koup blew up in his face yet this failure is informing future bids for outright fascist power in the USA today.

The failed fascist Koup on Jan. 6th, 2021 has quickly become Myth to liberal and conservative regressives as well as the increasingly undiluted American Fash.

For liberals, the Koup was an assault on the Finest Democracy in History. President Joe Biden and VP Kamala Harris both invoked this Myth today with Harris being particularly effusive on this score, as noted by the UK Guardian, in which she claimed that the attack was centred against “the institutions, the values, the ideals that generations of Americans have marched, picketed and shed blood to establish and defend”.

For country-club conservatives, the overrun of Congress was “worrying” and likely the work of false flag ‘Antifas’. For neocons who balance between the country-clubbers and neo-Nazis, this was definitely an ‘Antifa’ operation deployed by the Democrat Deep State. But also, heroic and great, depending on the audience at hand. For the disjointed assortment of dedicated Fash groups, the Koup is cast in more strictly heroic terms worthy of martyrs for racial freedom.

My recollections of the dramatic day itself point to signs that fascism is far from finished in America. Most strikingly, the reported failure of most Capitol police to show up on the day speaks to who may prove to be the most solidly disciplined base of American fascism. Practised in endemic racial violence and abuse, flush with lethal resources and deployed with badges to kill, American police (like other such thug-forces elsewhere) are the most natural constituency for outright Nazism.

Also, history’s greatest Spy-pire had loads of heads-up on what was being planned for the big day. Fascist online chatter by boneheads with limited security sense (undoubtedly honeycombed with cop-spies/sponsors) boasting for weeks about their intentions to overrun the Capitol to block the Jan. 6th Electoral College vote to confirm Sundown Joe as America’s oldest inaugurated President. One wonders whether there was more than one Security State agenda at play here: Trumpian supporters wanting a fascist Koup; others happy to watch it play out to catch Trumpers in the act.

Police presence also seemed to be at work within the Fash mob as they made their merry way through the Capitol complex. In CNN footage released weeks after the event, intruders in the Senate chamber, led by the barbarian calls of the ‘QAnon Shaman’, appeared to be chaperoned by a guy in full soldier gear sporting militia insignia who prevailed upon his fellows to not destroy property and leave soon after they arrived.

I have dubbed this event the Keystone Koup because it appeared an absurdly disorganized affair with far more bizarro bravado (cue the bellowing ‘QAnon Shaman’) than co-ordinated sense. Trump’s ghoulish erstwhile lawyer, Rudolph Giuliani, took the ludicrous cake in the motivating speeches of the day calling for a political “trial by combat” like some kind of Game of Thrones villain.

I admit that, contrary to liberal horror-takes, I laughed at and enjoyed the crowd’s chants to lynch then-VP Mike Pence as a bizarre form of perverted poetic justice that, alas, did not materialize. And the Koup Krowd displayed other signs that they did not trust their political leaders in the Gross Old Party. Evidence of this can be seen in the actions of the Senate intruders cited earlier who first rifled through the desk of Texan toad Ted Cruz, suspicious that he had actually betrayed them in the Electoral College vote!

There is a genuine mystery as to why Trump and Co. thought the Koup could work but the buffoonery of the day is consistent with the other straw-grasping that Trump deployed to annul the election: pushing the Justice Department and state-level GOP officials to “find” new votes, trying to sabotage the state-level anointment of Presidential Electors, looking for pretexts to declare military rule, etc.

Part of understanding this incredibly stupid mystery has to also be found in the remarkable weakness of American liberalism. Despite having won overwhelmingly in the popular vote, is it not incredible that there were virtually no spontaneous mobilizations to counter the “Stop the Steal” Fash demos of December 2020/January 2021? VP Harris’ comment noted earlier about American mobilization and sacrifice in defense of hallowed plutocratic institutions was nowhere to be found last January 6th nor any time since. Republican state-level efforts to further rig future elections and strip the voting rights of their liberal opponents have been meekly met with a Bill mired in the quicksand of the anti-democratic Senate.

With liberalism so willingly on the ropes politically and insistent upon strictly elite avenues of initiative which are largely hostage to Republican mendacity (the Supreme Court, the Senate, electoral commissions, etc.) it is understandable that the Trumpers deluded themselves to think their Keystone Koup could have worked. The regressive-enabling orientation of the Democrats continue to fuel Trumpian hopes that a future more vigorous effort can get the fascist job done. Add in the longstanding heavy pro-fascist sympathies of the police and the military and America has very much the whiff of the German Weimar Republic about it.

I used to think that Western elites would not opt to hand over their political fortunes to fascists so long as there is little of a Left to contend with. Fascism in the last century emerged very much as a mass murderous response to the power of socialist trade unions and growing Communist parties. Without significant left-wing parties in America or

Canada, the elites will undoubtedly continue to cultivate fascists as an auxiliary force to suppress signs of a political Left and even have them as a backup in case a real mass Left emerges. Before Trump, the penchant for North American elites to tip over into full fascism seemed limited.

Since Trump’s fascist dress rehearsal and the timid enabling response of elite liberals and milquetoast progressives, I am far less sure that elites won’t willing push down the fascist road. Fascists want total power and are eager to manufacture hysteria about how right-wing liberalism, with its token cultural takes, creates socialism trending towards the horrors of egalitarian communist utopia. Trump has branded Biden/Harris, as Obama/Biden was before them, as a “radical left” juggernaut requiring patriots to steal elections, shoot left-leaning protesters and topple sitting governments.

The right-wing hold on the Democratic Whitehouse and Congress have demonstrated that Blue Dogs like Biden and Harris are far more opposed to a potential Left, which even mildly challenges corporate power and the American Empire, than to fascists and Nazis who are dedicated to the absolute power of both. After the Democrats unexpectedly lost seats in the gerrymandered House of Representatives in November 2020, the prevailing consensus among Democratic National Conference leaders was that the loss was not due to the Party’s regressive Back-to-Obama platform but rather was due to Bernie Sanders (“socialists”) and BLM protesters “scaring” prosperous ‘swing’ voters who want an endless right-wing status quo. In other words, the Democrat leadership feels the same about a potential Left as Trump does about everyone to his Left.

The writing of America’s Weimar Republic is on the wall in neon letters. The Keystone Koup was not the last performance of American fascism. Trump is raring to run again in 2024 and has already ruled out anything but his victory. American liberals appear helpless and/or unwilling to stop Trump, his goose-stepping allies in Congress and their legions of supporters in the police, military and militia nutbar groups. Democrats have fulfilled Biden’s promise to the Party’s wealthy base to change nothing and have kept Trump’s tax cuts in place. Nor is a serious Left in place to take up the uphill fight.

Canadians have long been content to watch the mess down South with grateful satisfaction that we have a border between us. If fascism comes to power in the US Empire, do we really think that today’s American Nazis will simply pass us by?

Gabriel Haythornthwaite is a PhD Candidate at Western University’s Faculty of Education and a long-time political trouble-maker.

Reflections on Libya After the Murder of Qadaffi

Some reflections on a protest