The kids are not alright 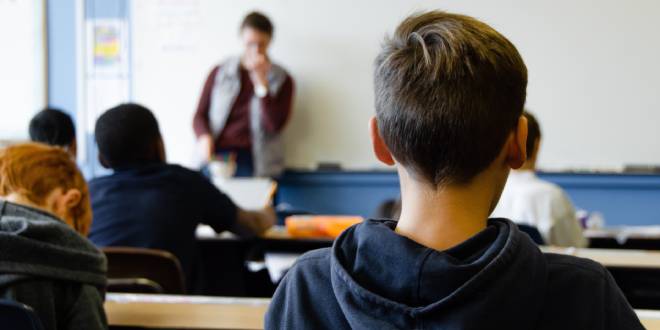 Jonathan is 18 years old. His big frame is zipped up in an all-black Boxing Academy tracksuit as I greet him in the staff room of the Boxing Academy, an alternative provision free school in Hackney, London. The school puts a big emphasis on mentoring and each class has a dedicated boxer who acts as teacher support and coach to the students. Once a pupil, Jonathan has now come back as a volunteer.

Alternative provision (AP) – consist of a mix of state-funded pupil referral units (PRUs), AP free schools and AP academies, as well as independent providers. In a nutshell, they are settings outside of mainstream schools where children are rerouted due to exclusions, special educational needs and disabilities (SEND) or other reasons.

I ask how Jonathan felt when he arrived at The Boxing Academy, aged 15. ‘A bit out of place,’ he tells me.

Excluded from his school aged 13, Jonathan attended PRUs for two years. But, he explains, those establishments felt hectic and disorganized. Once a child is expelled from school in England, they are twice as likely to be taught by an unqualified teacher. ‘So I came here not having myself all together.’

How can it make sense, with an epidemic of mental health problems among young people now… that the most nurturing and therapeutic specialist settings are literally in danger of closing?

Before arriving at The Boxing Academy, Jonathan says he never had support to help him manage his emotions. His time in school overlapped with the 57 per cent reduction in spending per pupil by English local authorities on services such as educational psychology, and special educational needs (SEN) support and assessment between 2009 and 2019.

Jonathan rejected the new school at first. But one day, sitting in the reflection room overwhelmed and confused, his teacher Jermaine spoke to him: ‘No matter what you do, we will always be here to support [you].’ This was the turning point, Jonathan tells me. ‘You can’t really compare it to anything else.’

Jonathan went on to excel at The Boxing Academy and has been pursuing careers in acting and boxing ever since.

A crisis in the making

Despite the benefits for young people like Jonathan, AP organizations face a funding crisis that has been exacerbated by the pandemic. Unlike mainstream schools, which receive consistent per-place funding each year, APs depend on referrals. This makes it difficult to plan ahead, allocate resources and even pay staff. As many leaders in AP have called out, it also means they’re essentially dependent on children being excluded to function – in other words, to get paid, they’re waiting on children to get into crises.

During the Covid-19 lockdown when most students weren’t attending schools, referrals of children to AP dropped by as much as 40 per cent.  This forced many headteachers to cut services and let staff go. Astrid Schon of London East Alternative Provision (LEAP) made 14 redundancies for teachers and learning support assistants at the end of 2020. The success of APs often depends on having the qualified, in-house staff to deliver a broad curriculum with relevant SEN and other supports. ‘We’re really talking about the quality of service to the most vulnerable children,’ she says.

Furthermore, now that schools are open, referrals are increasing: there is higher demand and lower capacity. ‘How can it make sense, [with] an epidemic of mental health problems among young people now… that the most nurturing and therapeutic specialist settings are literally in danger of closing?’ asks Anna Cain, headteacher at The Boxing Academy.

While 22 councils across the UK have been given the green light for cash injections on high-needs funding, these have mostly been swallowed up to plug deficits from long-term austerity cuts.

Karen Hayes, headteacher at Derby Pride Academy, fears that staffing cuts will increase the amount and use of unregulated and unregistered provision –  part-time, private and sometimes illegal schools that aren’t Ofsted inspected or regulated. The number of children in such settings is already estimated to be between 2,600 and 10,000.

The vast majority of excluded children are growing up in environments that disadvantage them long before their arrival in AP. Craig Johnston, a researcher who has been studying AP for 20 years and was himself excluded as a child, argues that it’s ‘absolutely unrealistic to think that AP can solve these problems alone’: austerity has deprived communities of the multi-service early interventions needed to support vulnerable kids. He reiterates: ‘we need to focus on what can be done earlier.’

The number of children under such provision (part-time, private and sometimes illegal schools that aren’t Ofsted inspected or regulated) is already estimated at between 2,600 and 10,000.

All the AP headteachers I spoke to confirmed that many of their pupils have histories of trauma including domestic violence, drugs, and bereavement. Such adverse childhood experiences can present in the classroom as disruptive behaviour, which all too often results in knee-jerk exclusion rather than early intervention and support.

An Education Policy Institute report released in March found that such vulnerable pupils are less likely to be assessed and diagnosed with SEN. The headteachers I spoke with said that many pupils arrive in AP with undiagnosed learning needs.

It seems that children aren’t receiving the early intervention they need, and are being excluded from school instead. Inadequate assessment and support for SEN in mainstream schools, reduced numbers of teaching assistants and other pastoral staff, and cuts to funding for public services such as child and adolescent mental health services (CAMHS), paint a picture of poor upstream intervention.

With council spending cuts reaching up to 31 percent in the most deprived areas, reliance on exclusions is likely to hit low-income children the hardest.

To make matters worse, from 2013-2018 there was a 60 per cent increase in the number of children permanently excluded from state schools. And while the rate of permanent exclusions has plateaued, the rate of fixed-term exclusions has been steadily rising and is now at its highest level since 2006.

On top of cuts that already reduce the quality of learning environments, exclusions have also been driven by shifts in culture around education. Perverse incentives led by league tables and ratings from the Office for Standards in Education (Ofsted), are linked to evidence that schools exclude pupils who are unlikely to perform well academically or who may disrupt learning for others. This peaks just before GCSEs, with permanent exclusions for year 10 students increasing 70 per cent since 2012, and affects failing academies most acutely.

While AP experiences have been welcome to young people like Jonathan, having recourse to support to stay in school is generally more beneficial for children. On average it’s clear: ‘Kids staying in mainstream schools get significantly better outcomes,’ says Craig Johnston. An increasing body of evidence suggests that ‘exclusions are detrimental to children’s education, wellbeing and socioemotional development’. Researchers at the University of Exeter found that being excluded could exacerbate existing mental ill-health and trigger long-term psychiatric illness. There’s also a clear correlation with poor longer-term outcomes: a 2012 study found that 42 per cent of UK prisoners had been permanently excluded from school.

Only one per cent of excluded pupils get five good GCSEs – often a necessary benchmark for entering the workforce. And for excluded pupils who finish education in AP, many go on to become NEET (not in education, employment or training) – seven to ten times more than mainstream school leavers.

There is significant variability in quality of education in AP. Outliers like the Derby Pride Academy ensure that 100 per cent of students leave with at least one qualification, while the national AP figure is just 53 per cent.

The wrong side of the system

Jonathan’s motivation to volunteer at his former school is part of his bigger vision. ‘Once I retire I want to open a boxing school just like this.’ But it won’t be for the excluded only; it’ll be for everyone: ‘I feel like a lot of people will just benefit from that confidence boost that boxing gives you,’ he explains.

The schooling system doesn’t share Jonathan’s inclusive outlook. As funding per pupil in English schools has fallen by eight per cent between 2009 and 2019 – the largest fall since the 1970s – exclusions have increased and outcomes in AP remain very poor on average.

As with most questions of policy, evidence-based recommendations for AP already exist – see for example the 2019 Timpson Review of School Exclusion. Standardizing at a national level, or at least increasing the transparency of, local authorities’ funding and commissioning (especially for independent providers); stopping off-rolling and overhauling data collection to track pupil movements and outcomes; and addressing the immediate funding crisis in AP to deal with the surge in new referrals, are quick wins to improve the equity and quality of support vulnerable children receive.

As abolitionist coalition No More Exclusions has said, we need ‘an education system which actively prevents this harm rather than only reacting to it’ and a broader system of social services that’s equipped to do the same.

Despite Jonathan’s resilience, vision and defiant successes, many young people in alternative provision, or at risk of exclusion, are ending up on the wrong side of these ill-funded systems. The kids are not alright, and we can’t accept that.