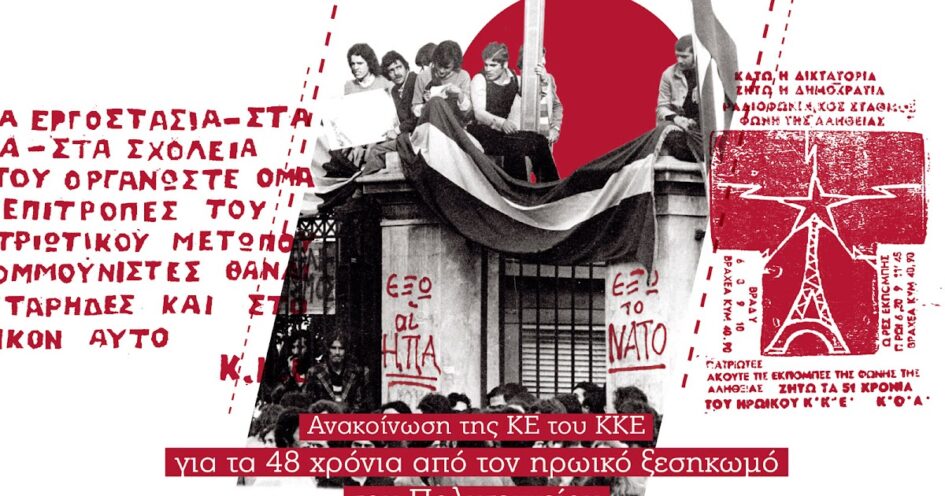 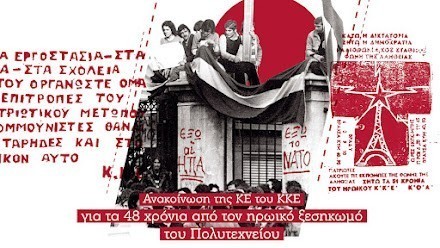 By Nikos Mottas.
“This year’s celebration of the Polytechnic uprising can become another link in the workers-people’s struggle for education and work with humane conditions, protection measures for the health and life of the people, free time, income for a dignified life, for the rejection of any anti-labor – anti-popular law, for the condemnation of any bourgeois party, which, with the whip or carrot, deprives the workers and their families of the wealth they produce”, the Central Committee of the Communist Party of Greece (KKE) emphasizes in its statement on the occasion of the 48th anniversary of the uprising of the Athens Polytechnic (read here the statement in Greek).

The KKE points out that the slogans that marked the 1973 uprising, such as “Bread, Education, Freedom” and “USA out, NATO out” remain today, 48 years ago, timely “because despite the scientific-technical development of half a century, the satisfaction of all contemporary needs stumbles into which class has the organization of production, of economy and society overall”.

“The Polytechnic brings to mind all the communists and other radical fighters who stood up against the dictatorship, who faced the horror of torture in the dungeons of EAT-ESA, who were imprisoned and exiled, who suffered all kinds of prosecution. It brings to mind the struggling youth, the students of the anti-EFEE. The KKE unreservedly honors their struggles “, stresses out the statement and continues:

“The heroic popular uprising of workers and the people at the Polytechnic was not a “thunderbolt in the air”. It was the culmination of the anti-dictatorship struggle of the people and the youth, which began slowly and with difficulty and intensified from 1972 onward, pressing on the sacrifices of new fighters, but also on the possibilities created by the closure of the exiles and the liberation of the communists. experience from the organization of the struggle in the 1940s and from the subsequent struggles.

The members and cadres of the KKE devoted all their forces to the organization of the anti-dictatorship struggle. This happened despite the fact that the imposition of the April dictatorship caught the Party organizationally unprepared, with its Party Organizations disbanded since 1958. In conditions of illegality, the KKE clashed with the opportunist group within its ranks and split from it in the 12th Plenary Session (1968). It managed to re-organize its Party Organization and to establish the Communist Youth of Greece.

The communists, men and women, some more experienced in the class struggles of the previous period and others taking their first steps with youthful enthusiasm, fought against the dictatorship on the front lines, in workplaces and working class neighborhoods, in schools and universities, against the fear and within the “plaster” conditions that had prevailed”.

The KKE statement points out that the special importance of the Polytechnic lies in the fact that the student uprising immediately gathered the active solidarity of thousands of workers and other popular forces in the most significant urban centers and adds:

“The Polytechnic uprising was “stained” with blood. However, at the same time, it definitively buried the plans of the so-called liberalization of the Junta which had the support, or the tolerance, of bourgeois and opportunist political forces. It contributed, along with the subsequent coup in Cyprus and the Turkish invasion, to the transition from the military dictatorship to the bourgeois parliamentary democracy in July 1974.

The coup of April 21, 1967 was not the work of some “senseless military officers”, as a section of the bourgeois political world has since tried to present it in order to hide its true content and to “purify” its responsibilities. It was not the result of the “right-wing state” or a violation of capitalist legitimacy, as another section of the bourgeois political world claims for the same reasons. The military dictatorship has been one of the many forms of capitalist power, chosen according to the respective priorities and needs of the bourgeois class in relation to the domestic and international correlation and always with the aim of strengthening and perpetuating its power. The entire 20th century’s historical experience on military and non-military dictatorships, as well as on fascism-nazism, shows that behind the “democratic” proclamations of capitalist power there is always bourgeois violence and repression. For that reason, both the bourgeois Constitution that existed before 1967 and the current one, provide the diversion from the bourgeois parliamentary democracy in order to deal with the so-called “state of siege”. Bourgeois violence and repression are inherent to class exploitation, regardless of capitalist power’s political form. That is why the communists in Greece faced persecutions and executions both in conditions of bourgeois parliamentary democracy as well as in conditions of bourgeois dictatorship”. 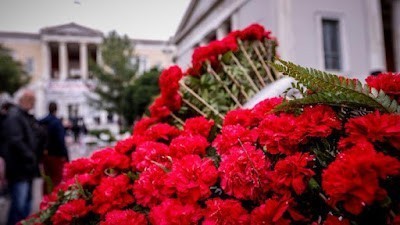 “Nowadays, the KKE statement stresses out, anti-communism is intensifying again, in every way and means possible: From the Parliament’s podium, in the columns of bourgeois Press, through the criminal activity of neo-Nazi gangs, with the unhistorical equation of communism-fascism. Anti-communism, hatred for the KKE, the workers’ movement and the popular struggles are not exclusively related to the communists. The experience, both from the 1967-1974 dictatorship, as well as in general from the domestic and international history, shows that anti-communism always goes hand by hand with the overall attack on freedoms, rights and achievements of the working people. History teaches that anti-communism is a common feature of the bourgeois political world and therefore cannot be definitively confronted without the overthrow of the capitalist system that generates it. The same applies for the radical confrontation of fascist-Nazi gangs”.

Referring to the role of imperialism back in 1970s and today, the KKE statement points out: “The April dictatorship, continuing the policy of the previous governments, involved the country even further in the inter-imperialist competitions of the time, aiming at the upgrade of the role of the Greek bourgeois class in Eastern Mediterranean. This fact secured her both the U.S support as well as economic relations with the countries of capitalist Europe. Nonetheless, the subsequent developments, in particular the Cyprus tragedy, proved the dangers that bourgeois plans pose for the people”.

That is why, the Communist Party underlines, the slogans written in the entrance of the Polytechnic – “USA out”, “NATO out” – which became slogans against imperialism, “remain relevant in today’s conditions, despite the changes in the arrangement of capitalist states and alliances”. The KKE statement adds: “The bourgeois Greek state (today with the ND government, before with SYRIZA and earlier with PASOK) always seek its geostrategic advancement in competition with NATO ally Turkey. In this regard it signed new agreements to strengthen the U.S. military presence with new bases, concluded a “strategic partnership” with France and signed agreements with Egypt and Israel”.

The Polytechnic uprising is linked to today’s popular struggles and the commemoration of the November 17th 1973 events never loses its significance and relevance for the younger generations. The KKE statement reads:

“The struggle of the workers in the Piraeus Port, the successful strike of “e-food” workers, the strikes of builders and health workers, the rallies by those affected by natural disasters show that the workers, with organization, struggle and class solidarity being their weapons, can claim their right, can inactivate anti-worker laws and court decisions that try to disable the workers-people’s struggle. They can become the streams for the working class river that will hit the foundations of class exploitation. At the same time, the workers-popular movement must intensify the struggle to close down all bases, for the disengagement of the country from the unions and alliances of the capital. This is a debt to internationalist solidarity, a prerequisite of the struggle to overthrow the system that breeds war, poverty, exploitation”.

The Central Committee’s message emphasizes that “everything that the working people have won over time has been achieved by following the path of struggle against capitalist governments and employers. The history of class struggle in Greece and the world shows that as long as there is exploitation of man by man, nothing is given away by the ruling exploiting class. It is conquered with struggles against the exploiters, their economic domination and political power”. 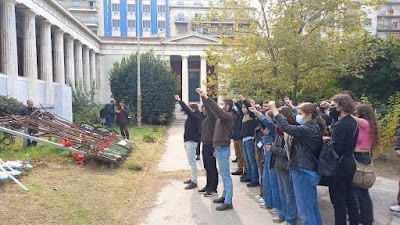 The statement concludes by stating that “in the upcoming period the KKE seeks to stimulate the collective debate on how the struggles for democratic, trade union and political freedoms, for the living standards, the social and political rights of the working class and the poor people will be included in the struggle for the overthrow of capitalist power, for socialism”.

It must be noted that, like every year, members and friends of the KKE and KNE, as well as representatives of trade unions, students and women’s associations, peace committees and other organizations of the popular movements laid wreaths to the Polytechnic premises in Athens, Thessaloniki and other major cities throughout Greece.

The commemoration of the Polytechnic uprising anniversary concludes with the annual rally in the center of Athens that ends outside the U.S. embassy. Similar rallies have been scheduled for today, Wednesday evening, in Thessaloniki, Patras and other cities.

Tribute to the 104th anniversary of the Bolshevik Revolution in…

Flashback: Remembering the 2011 murderous attack against PAME rally in Athens