The Low Point of Labor Resistance Is Behind Us 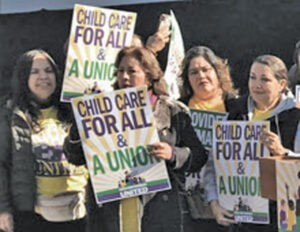 The Low Point of Labor Resistance Is Behind Us: The Socialist Workers Party Looks Forward is the product of trade union and broader political work over the last year by SWP members responding to deepening cracks in the world order established by the victors of the inter-imperialist slaughter known in the United States as World War II.

This activity by party members, shoulder to shoulder with other working people and youth, is being carried out amid mounting global conflicts among rival capitalist powers, with explosive ramifications for workers and farmers in the Americas, Europe, the Mideast, Africa, Asia, and the Pacific.

Above all, the articles and documents here highlight the opportunities ahead for class-conscious workers, as a decades-long retreat by the working class and trade unions comes to an end. The intensified speedup, longer and longer hours, attacks on job safety, declining real wages, lack of steady employment, and spiraling social and moral blight — conditions produced by the ruling class families in the United States and capitalism’s dog-eat-dog social relations — are pressing more and more working people to say, “Enough is enough.” Workers have begun using our collective economic power and class solidarity in response.

The material compiled in these pages has been written and prepared for publication by the Editing Commission of the Socialist Workers Party National Committee: Jack Barnes, Steve Clark, Dave Prince, and Mary-Alice Waters. It opens with an article from the Militant newsweekly, “published in the interests of working people,” as its masthead proudly proclaims. The article reports on the June 9–12, 2022 International Active Workers Conference organized by the SWP, with some 350 participants from eleven countries.

One, in defense of Ukraine’s independence and sovereignty, was released March 3, 2022, in the opening days of Moscow’s invasion, launched with the avowed aim of erasing the very existence of its neighbor.

The other was issued on October 11, 2022, in the wake of Hurricane Ian’s devastating path across western Cuba. Consistent with the SWP’s history the statement, like many before it, demands an immediate end to the US government’s six-decades-long murderous attempt to crush Cuban working people for their audacity in making a socialist revolution in what Washington considers its own backyard.

The heart of the book, from which the title is taken, is the political resolution adopted December 12, 2022, by the 49th Constitutional Convention of the Socialist Workers Party. It sets forth the course of action that has guided the party’s work and will continue to do so — the course necessary today to forge mass proletarian parties and an international communist movement able to lead the struggle to end capitalist rule.

As the opening lines of the SWP Constitution state, the purpose of the party is to advance the education and organization of the working class “in order to establish a workers and farmers government which will abolish capitalism in the United States and join in the worldwide struggle for socialism.”

The resolution is written in the form of twenty-seven numbered sections, yet none of the questions engaged here stand alone. They can be understood only as part of the line of march of the working class to state power, the political line of the resolution as a whole.

Among the questions addressed are:

Why the fight to prevent erosion by the capitalist government — both in Washington, as well as in the fifty states — of freedoms protected by the US Constitution is central to the US class struggle today. Freedom from government intervention and constraints on worship, on speech, on the press, on due process, on a trial by a jury of one’s peers (not forced confessions in the form of “plea bargains”), and more. This includes opposing the US rulers’ expanding use of Washington’s political police, the FBI above all.

Why the tenacious maintenance of the US Supreme Court and judiciary as courts of written law, not de facto legislative bodies, is essential to defense of the liberties of working people under the Constitution.

Why socialist revolution is impossible without a fight to build the trade unions and transform them into independent instruments of class struggle, wielded by class-conscious, battle-tested members.

Why the working class needs a labor party based on the unions, a labor party that could present a complete break from the illusion that the parties or candidates of the imperialist rulers can represent us. A party that speaks and acts in the interests of the working class and oppressed as a whole. A party that rejects demagogic appeals to the politics of resentment, used by both the capitalist Democratic and Republican parties to appeal to and pit against each other insecure layers of the middle class and sections of the toilers.

Why there is no road to African American liberation — no end to racist discrimination and the legacy of centuries of slavery and then Jim Crow terror and oppression — separate and apart from the working-class course toward a victorious socialist revolution.

Why the fight against Jew-hatred, on the rise across the world today, must be integral to the program and strategy of the revolutionary workers movement, and of all organizations of the exploited and oppressed.

Why the fight for women’s emancipation is inextricably intertwined with addressing the capitalist-caused crises of joblessness and inflation; the lack of affordable medical care, childcare, and housing; as well as drug addiction and domestic violence — all of which bear down on the families of working people, and on women especially. Why there should be no federal, state, or municipal laws restricting the safe medical availability of abortions.

Why a revolutionary party must be proletarian in composition as well as program and leadership.

Why the positions reaffirmed by SWP convention delegates trace their continuity from the founders in 1847 of the modern revolutionary workers movement, Karl Marx and Frederick Engels, and the world’s first communist party they led. To the opening years of the first victorious socialist revolution, the Bolshevik Revolution of 1917 under the leadership of V.I. Lenin. To the example of Cuba’s socialist revolution under the leadership of Fidel Castro and the leading cadres of the Rebel Army. And to the SWP’s class-struggle experience from the founding of the first communist party in the US in 1919 down to today.

Why the Transitional Program, the 1938 founding resolution of the Socialist Workers Party and of our world movement, remains at the center of our program to this day.

Asserting that “the low point of labor resistance is behind us” is not a prediction about coming struggles. Nor is it a promise about when or where new and more powerful class battles will break out. Instead, that assessment is based on the increased confidence and combativity, as well as the anger demonstrated by working people confronting very different conditions around the world.

We’ve seen it during the post-COVID economic “recovery” with strikes, organizing efforts, and other union fights in the United States by bakery workers, rail freight workers, coal miners, and other unionists, as well as by others organizing to establish unions where they work.

We’ve seen it in fights by public education workers and truckers in Canada, by rail workers and nurses in the United Kingdom, and by workers and unionists from Australia, South Korea, and Russia to Israel, South Africa, and Puerto Rico.

We’ve seen it in the mass revolt in China against the brutal, anti-working-class COVID policies of the Stalinist regime in Beijing.

In the hundreds of thousands of youth and working people who’ve taken to the streets across Iran in response to the death of Zhina Amini at the hands of the hated “morality” police.

In the determination of the toilers of Ukraine to roll back Moscow’s attempt to wipe them off the map.

In the steadfastness of Cuban working people in defending their socialist revolution in face of the mounting human and material hardships inflicted by Washington’s brutal, decades-long economic, trade, financial, and diplomatic drive to crush the revolution.

The Low Point of Labor Resistance Is Behind Us: The Socialist Workers Party Looks Forward is a companion to two other Pathfinder books, one published in late 2021, the other forthcoming in 2023. Both develop central aspects of the SWP’s program and activity addressed here in the party’s 2022 convention resolution.

Labor, Nature, and the Evolution of Humanity: The Long View of History is a defense of Marxism — a defense of the proletarian line of march toward power, historical materialism, and basic physical and biological science — against what the resolution calls the “anti-working-class race-baiting, wokery, and ‘cancel culture’ on the bourgeois and petty bourgeois left.”

The second book, coming later this year, brings back into print the 1960 booklet Too Many Babies? The Myth of the Population Explosion by SWP leader Joseph Hansen, along with Lenin’s writings on the working-class road to women’s emancipation. The Bolshevik leader intransigently condemns capitalist population control notions, pointing to their “completely reactionary nature and ugliness.”

As the document explains, Lenin contrasted “such an outlook to that of ‘the class-conscious worker,’ who is confident in ‘the working-class movement and its aims’ and who says instead: ‘We are already laying the foundation of a new edifice and our children will complete its construction’ — and their children, and their children!”

Together, these three books underline the more and more pressing reality that the working-class forces capable of forging that “new edifice” are being born and will be born in the class battles of the world-in-becoming.

The proletarian internationalist party-building course presented in these pages is the only one that can lead to victory. It’s the only one worth fighting for. The future of humanity is in the balance.

Without a Left Alternative, Resistance Channels Behind the Far Right

Low paid workers: between a rock and a soft place

Anne: Hillsborough drama reminds us how low the establishment will go to protect itself