The making of La BOM: Montreuil’s new Library of Things and Sharing Hub 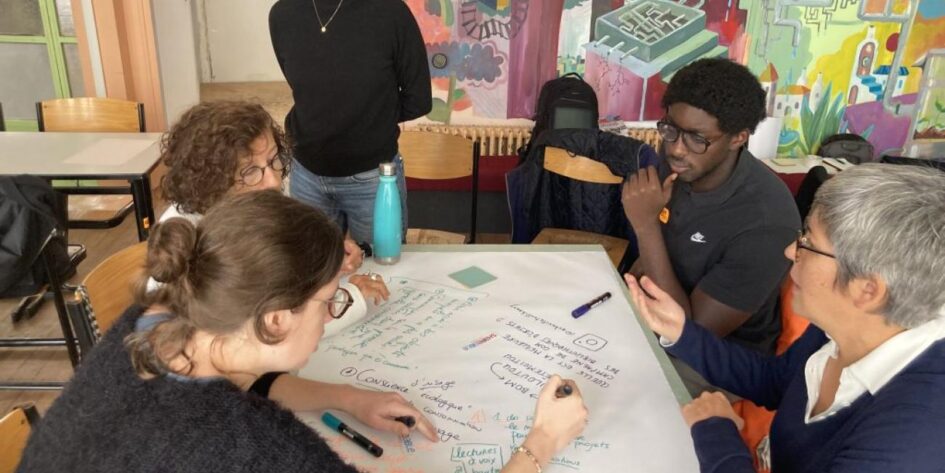 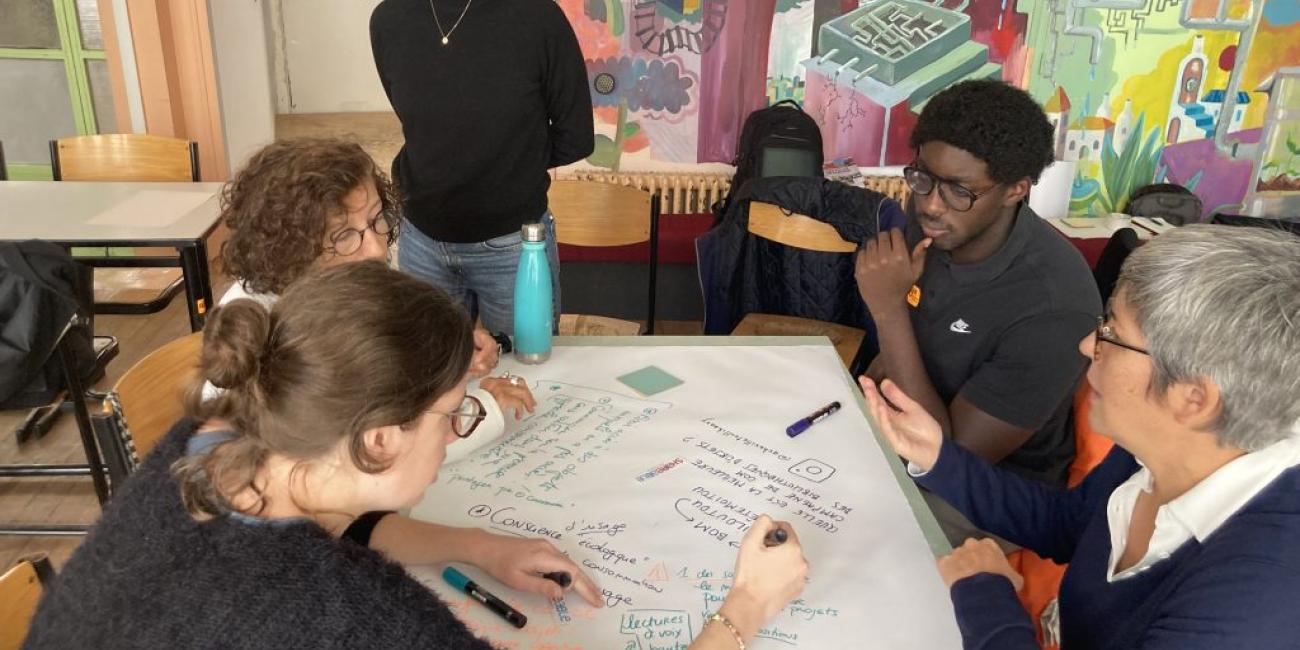 Above Photo: La BOM Staff and members participating in a World Cafe workshop exploring what it will take to become of ‘Sharing Hub’ led by Shareable’s Tom Llewellyn. (Shareable)

Montreuil, France – Inspired by Shareable’s coverage of the sharing economy, Bibliothèque D’Objets De Montreuil, also known as La BOM, opened its doors as a “Library of Things” in April 2022 in the Parisian suburb of Montreuil.

La BOM’s president and founder Sylvain Mustaki had been searching for a way to make a difference in an economic climate that disenfranchised people who struggled financially.

Mustaki says that Libraries of Things (LoT) help reduce waste through the loaning and lending of useful but costly everyday tools, appliances, and other items, but says empowering everyday people to share is his focus.

I’m afraid we have difficult times coming, particularly for poor people. Building a community based on sharing and mutual help is the best chance for the people to get through hard times. We had to do something. — Sylvain Mustaki, president and founder of La BOM

La BOM was conceived in 2019 and has enjoyed support from the community as well as foundations, regional government, and Montreuil Mayor Patrice Bessac. Yet the COVID pandemic delayed the library’s launch by almost three years.

Mustaki, a former rock’n’roll producer, believes La BOM is the first of its kind and magnitude in France.  His road to founding this sort of lending library began with lots of research, starting with Shareable’s book, “Sharing Cities: Activating Urban Commons.” He sought guidance from Shareable Interim Executive Director Tom Llewellyn and LoT organizers in Quebec, Geneva, and other cities. Working with Shareable while figuring out what to do next, Mustaki hosted a sharing festival in 2019 and invited Llewellyn, along with Mayor Bessac and other government officials, to speak at the event.

According to Llewellyn, the festival inspired Mayor Bessac, who would later challenge Llewellyn and Mustaki to do something to promote a sharing economy in Montreuil.

Llewellyn, who had co-founded a tool library in Asheville, North Carolina, before joining Shareable, proposed they open a library of things in France. LoTs are a good way to “put sharing into people’s hands. Let them touch and feel (sharing) in a way that they will understand that it is appropriate for the community,” he said.

Mustaki agreed. An LoT would be a good fit for Montreuil, a city of 110,000 people known for their sharing spirit, left-wing ideology, and 2,500 active community associations. An LoT would also support ecological goals to divert usable items from landfills and offer ways to share popular though less-used items affordably.

LoTs are very much like traditional libraries, with one exception. Instead of lending books, LoTs loans other items and objects, such as kitchen tools and utensils, camping gear, toys, and men’s suits. Many focus on one category, such as tools or kitchen implements, while La BOM differs and offers a variety of things.

“We have 500 items,” Mustaki said. “The angle is to offer any object that can be used in everyday life, but that is not used very often. So, it can be a tent, glasses for a party, and all kinds of items for a normal life but that you don’t use on a frequent basis.”

La BOM gets its inventory from object loans, donations, and purchases. If there are popular items that have not been donated, loaned or in good condition, the group purchases what is needed. Those purchases represent less than 5% of the inventory, while loaned items are only a part of La BOM’s offering until lenders request their return.

Mustaki would like to see La BOM’s inventory expand from 500 to 1,000 objects over the next few years.

Rental fees range from €5.00 per week for items valued at less than €100.00 to €50.00 per week for objects that cost over €1000.00. Subscribers must visit the site to retrieve their items, though Mustaki hopes to ship items in the future.

La BOM has 665 members. Membership is kept affordable at €10.00 a year, though no one is denied because of a lack of funds.

“If they cannot afford the standard membership fee, we will accept less,” he said.

Commenting in a Shareable article about libraries of things around the world, Gene Homicki, founder of an LoT management system called myTurn, noted that great LoTs offer more than items.

The most successful libraries of things are the ones [that] do more than just lend items. They also create a strong sense of community. For example, offering sliding-scale subscriptions based on income or usage to help ensure a diverse community can afford to access the library. — Gene Homicki, myTurn founder

La BOM’s community is centered on its 600-square-meter building — more than enough space for a library of things and several other sharing opportunities. Both subscribers and residents living in the greater Paris area can frequent La BOM for its photography, music, sewing, and textile studios, a wood shop, a repair shop, and an alkaline (disposable) battery exchange.

The RegenBox battery charger and exchange designed by ATELiER 21, allows for a daily per-person swap of four expired batteries for recharged ones. Llewellyn says La BOM’s battery exchange can recharge up to 200 batteries daily and estimates up to 50 people could utilize this service per day.

It’s an amazing pilot with an environmental impact that is off the charts, and these batteries are being kept out of landfills. — Tom Llewellyn on La BOM’s alkaline battery exchange

Llewellyn says these activities and spaces expand La BOM’s purpose, from sharing things to sharing knowledge and resources, making it more of a sharing hub than just an LoT.

This includes hosting workshops on sharing and other topics and offering space rentals for corporate and neighborhood events, as well as movie productions.

Mustaki believes La BOM’s purpose and potential far outweigh its challenges. Covering the library’s operational costs can be a balancing act between monthly expenses of €12,000, a monthly income from object loans, workshops, and leases that vacillates between €3000 and €5000, and reimbursable subsidies based on specific uses more than general operating support.

Mustaki says La BOM is well supported by locals. However, in addition to covering monthly operational costs, La BOM’s other pressing need is to increase the number of people who know and routinely use La BOM’s LoT and other sharing spaces.

“Every time I have the opportunity to say what it is and what it stands for, people say, ‘wow, what a great idea.’ But you may say it’s a great idea and only use it once,” he said.

“At the moment, about 80 to 90 percent of the people do not know we exist. We don’t have TV spots. It’s all person-to-person, though I think in time people will learn about the existence of La BOM, what it offers, and what it stands for,” Mustaki added.

Llewellyn agrees that attracting members has been a challenge, but like Mustaki, sees great potential in the near future.

“Membership will grow on the back end. Once people know about it and start going to La BOM for other reasons, like its various studios and its free repair shop and alkaline-battery swap, they will be far more likely to become members,” said Llewellyn. “It’s so much more than a library of things. It’s a sharing hub, and that’s their greatest asset.”

As Delta surges in prisons, states stop sharing statistics with the public