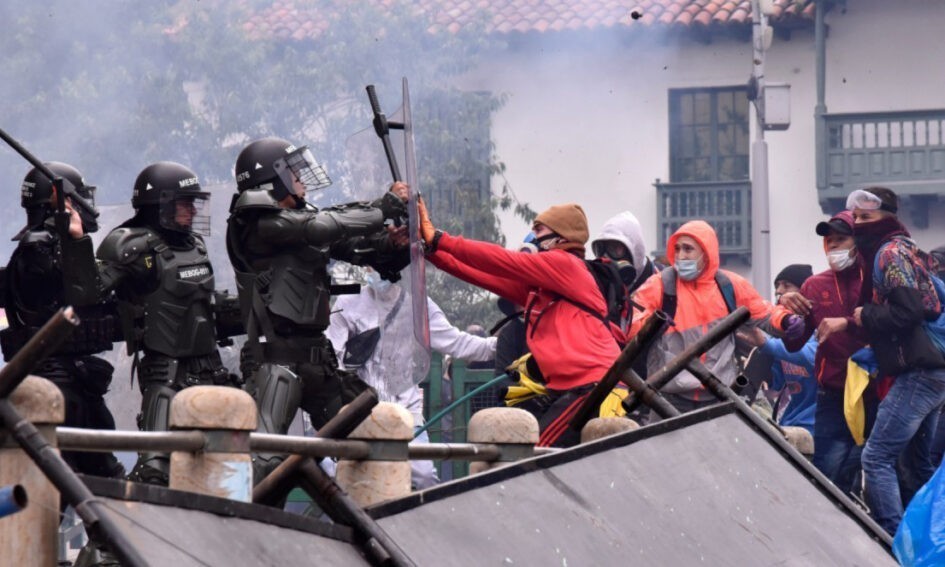 The months of April to July this year were marked in Colombia by mass protests on the part of people who have simply had enough of being poor and subjected to violent repression when they live in a country so rich in natural resources.

The protests were sparked by a government announcement of huge tax increases, falling disproportionately on people barely able to survive on the income they receive.

This announcement infuriated the masses of working people, who had already been taking to the streets in protest against poverty before the pandemic but most of whom are now suffering from even lower living standards as a result of the Covid lockdowns that have caused economic output in the region to fall by some 7 percent while unemployment has skyrocketed.

Some 2.8 million people have now fallen into extreme poverty, earning less than $38 a month, so that the proposed tax reform was the last straw. It drove the angry Colombian masses to the streets in their millions, determined to keep on loudly protesting until these outrageous proposals were withdrawn.

As the New York Times explained: “The tax proposal was a catalyst that brought longstanding frustrations to a boil.

“Colombia is among the most unequal countries in the world. A report from the Organization for Economic Cooperation and Development in 2018 said that it would take 11 generations for a poor Colombian to approach the mean income in his or her society – the highest number of 30 countries examined.” (Why are Colombians protesting? by Julie Turkewitz, 6 June 2021)

“Around 80 percent of the land in Colombia is controlled by just 1 percent of the population … Meanwhile, 42.5 percent of Colombia’s population lives below the poverty line.” (Political risk analysis: what do investors need to know about Colombia’s 2022 election? by Nathaniel Parish Flannery, 12 July 2021)

As a result, once the fuse was lit: “On Wednesday [5 May 2021], after seven days of marches and clashes that turned parts of Colombian cities into battlefields, demonstrators breached protective barriers around the nation’s congress, attacking the building before being repelled by the police …

“Demonstrators now include teachers, doctors, students, members of major unions, longtime activists and Colombians who have never before taken to the streets.

“Truckers are blocking major highways. And on Tuesday [4 May], demonstrators in the capital burned buses and lit over a dozen police stations on fire, singing the national anthem, yelling ‘Assassins!’ and sending officers running for their lives.” (Colombia police respond to protests with bullets, and death toll mounts by Julie Turkewitz and Sofía Villamil, New York Times, 5 May 2021)

Colombia’s president, the right-wing Iván Duque, had tried to pass off his proposed tax reforms as a measure to lift people out of poverty.

“President Iván Duque claimed it would raise 23.4bn pesos ($6.4bn) and help reduce Colombia’s fiscal deficit (set to reach 8.6 percent of GDP in 2021, from 7.6 percent in 2020), lifting 2.8 billion people out of poverty and enabling the creation of a fund to tackle the effects of climate change.

“But this was not a progressive tax reform: it would have expanded the scope of VAT, taxed people until then considered to be earning too little to pay, and abolished many exemptions for middle-class households, already hard hit by the Covid-19 crisis.” (Colombia’s growing repression by Lola Allen and Guillaume Long, Le Monde Diplomatique, June 2021)

President Duque’s excuses, therefore, did not pass muster. It is clear that most of the extra revenue was related to Colombia’s debts to imperialism. It makes economic sense that Colombia would want to minimise its indebtedness, as it is quite likely that interest rates will soon start soaring (in an effort to control inflation) as a result of the worldwide spree of quantitative easing.

However, the major beneficiaries of the borrowing are the very rich, and it is they who need to be asked to fork out to reduce indebtedness, not the poor or the just-about-managing.

But a government of the elite is never inclined to go to the elite for money! And a puppet of imperialism will always tend to be reluctant to default for fear of being ousted in favour of a government that is more respectful of the imperialist financiers’ diktat.

The government response to the protests started with its usual resort to brutality, violence and murders. As early as 12 May, “Colombia’s highly reputed Institute of Studies for Development and Peace (Indepaz) recorded 39 police killings, 1,055 people arbitrarily detained and 16 cases of sexual violence.” (Ibid)

This brutality, however, merely had the effect of enraging the masses still further, so that not only did the protests continue and grow, but in addition they took on new demands.

“’This is not just about the tax reform’, said Mayra Lemus, 28, a schoolteacher … ‘This is about corruption, inequality and poverty. And all of us young people are tired of it.’” (Julie Turkewitz and Sofía Villamil, op cit)

Colombia’s elite, in order to maintain their privileged status in the face of the anger of the masses and the armed rebellion on the part of Farc and ELN (two guerrilla movements representing the interests of the downtrodden), rushed to sign up to the role of US puppet, opening the country to the unbounded depredations of imperialism in return for protection from their own people.

As a result, Colombia has for decades been the largest recipient of US military aid and one of the largest buyers of US military equipment in the west. The bill for all thi is paid, of course, by the Colombian working class and peasantry, who are forced to pay for the abundance of instruments and knowhow of repression that Colombia’s armed forces and police deployed, and still deploy, with gay abandon against anybody the slightest bit progressive (trade unionist, community leader, guerrilla fighter etc) who puts his or her head over the parapet.

This condemned the country to years of violence as the government, on behalf of the elite, sought to wrest control from the Facr and ELN of the vast territories they had liberated. However, only five years ago, with a view to putting an end to the perpetual bloodshed, the Facr signed a peace agreement with the then government, which allowed for its personnel to be reintegrated into mainstream Colombian politics and armed forces in exchange for the liberated territories being returned to government control.

It didn’t take long, however, for the Colombian elite and their US protectors to row back on all the promises they had made in the peace accords.

Le Monde Diplomatique reported: “Last year alone … a total of 91 massacres claimed 384 lives. In March 2021, the UN verification mission in Colombia reported that 262 former Farc combatants, signatories to the peace deal, had been killed after signing the 2016 accords, despite the fact that one of the deal’s key government commitments is the duty to provide security protection to former combatants.” (Op cit)

And it is not only Farc combatants who are being murdered. According to the Orinoco Tribune, “State-sponsored terrorism against social leaders and activists has a long history in Colombia. Some social organisations estimate that every four days a social activist is killed in the country.

“The website of Pacifista.tv features 384 murdered social leaders; among them are board chairpersons of community organisations, peasant guard members, indigenous leaders, students, and others. The list is described as an extensive ‘tragic logbook of what it means to lose the men and women who try to maintain peace in their regions or who defend community rights …’

“Since the end of the 1990s, military plans have been strengthened and applied extensively via Plan Colombia, Plan Patriota, and the National Plan for Territorial Consolidation, all with US support and financing, which have resulted in an overwhelming militarisation of society and the state,” while “current military manuals promote military extermination of civilian ‘enemy’ populations and the promotion of covert operations as well as the creation of paramilitary structures”. (Selective assassinations: The US agenda for Colombia by Anahí Arizmendi, 18 May 2021)

As it became obvious even to those most reluctant to see it that the brutality meted out by the Colombian state to the protesters was only galvanising more and more people into more and more determined action, Duque was forced to retreat and withdraw his iniquitous tax proposals.

On 20 July, a revised tax reform bill was put before Congress that not only significantly reduced the amount that the government was hoping to raise (from 23.4tn pesos to 15.2tn), but also redirected these levies to some extent against big business rather than the masses by increasing corporation tax from 31 percent to 35 percent, which it is estimated will raise 6.7tn. Further sums are expected to be raised by cracking down on tax evasion.

There are also undertakings to reform the police and to provide a 25 percent minimum wage subsidy for young workers. The government has also promised that the poorest 50 percent of students, who account for 97 percent of those at public universities and technical schools, will get free education from the second half of the year.

Whether such promises would be kept once the protests have subsided is in some doubt, since nobody knows where the government would get the finance to support them.

Suffice it to say that, seeing its client state’s distress, the imperialists have leaped in to make matters worse. International credit rating agencies have now announced that Colombia’s credit rating has been reduced to junk status, meaning that any money the country borrows from now on will be at astronomic rates of interest payable to the bloodsucking imperialist financiers.

There can be no future for the masses of the Colombian people without overthrowing the craven elite who prosper by selling out the interests of the masses to imperialism. We have no doubt that protests will turn into rebellion and rebellion into revolution as the working class and peasantry of Colombia come to realise that this is the only way forward.

Mercenaries: From Colombia to the World