The meaning of the 2 October protests in Brazil 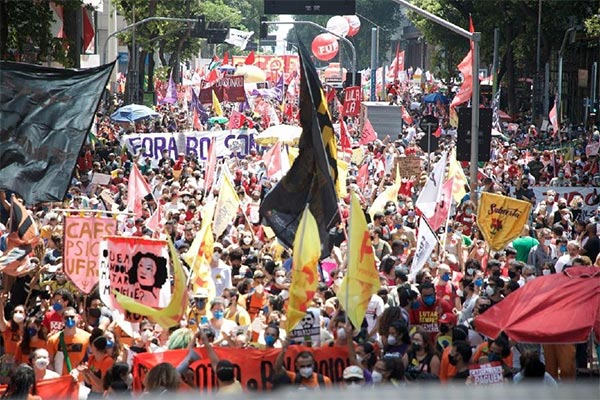 On the march in Rio de Janeiro

The demonstrations last Saturday calling for president Jair Bolsonaro to go were a big success.

In Belo Horizonte no fewer than 80,000 marched. In the far south, in the cities of the Rio Grande do Sul countryside, the cry of “Bolsonaro Out” was also heard.

It was also like this in all the capitals of the north, the northeast and in major cities across the country. And internationally several countries saw solidarity actions with the struggle in Brazil.

The 2 October demonstrations became a fundamental force. Without this unifying action, the relationship of forces on the streets could begin to shift in favour of the government. This is despite Bolsonaro’s falling popularity and his growing isolation, which has made his re-election in the presidential elections scheduled for October next year increasingly unlikely.

Without the 2 October in the memory of the masses, the dominant event would be 7 September when pro-Bolsonaro supporters dominated the streets.

And the streets, in Brazil, since 2013, have become indicators of deep social and political trends. On 7 September it became apparent that the extreme right had lost much of its capacity to mobilise, but that, even so, its “street weight” exists.

If there had been no response, its strength could have revived and it could have developed more effectively.

The truckers’ actions the following day, with open support from business sectors, indicated the potential to produce a crisis and influence the course of events. There was the possibility of putting pressure on the institutions of liberal democracy or even paralysing them.

On 7 September the Bolsonaro Out movement was much smaller than Bolsonarism.

The timid response allowed fear to grow, even though the actions did not allow the streets to become exclusively Bolsonarist. On 2 October the streets were exclusively for the Bolsonaro Out movement. This is a great victory. We should celebrate it.

It is proof that the opposition is stronger than Bolsonaro in the stereets as well as in the opinion polls.

The 2 October could have been bigger. But firstly the Workers Party (PT) leadership and former president Lula have already adopted the electoral contest with Bolsonarism as their main strategy .

Lula’s absence from the demonstrations is an indication that his political work is focused on sewing alliances to win the elections, not on the street demonstrations. The streets play a complementary role in the politics of the PT leadership. The aim is to keep its social base warm, but mainly to build the vote as the weapon that will really remove Bolsonaro from power.

Secondly, the liberal bourgeoisie has not found a candidate capable of having more strength than Bolsonaro. Without this, it will not risk street protests that could lead to his impeachment.

Although part of the bourgeoisie has already embarked on an alliance with Lula, the majority still seeks a candidate to call their own.

In addition, Bolsonaro showed his strength on 7 September. And he warned that he will not accept impeachment without resistance, much less the imprisonment of him and his followers.

So 2 October, despite the victory represented by the shout of Bolsonaro Out taking the streets again after many weeks without unified national actions, opened an impasse.

It may represent the last real mass mobilisation to put Bolsonaro out by the force of the streets and the first electoral mobilisation. Or it could be a revival, a new attempt at a street-driven Bolsonaro Out.

The forces of the mainstream bet that the streets will not speak so loudly. They prefer a game dominated by traditional institutions and electoral channels.

The revolutionary drive has not, so far, overcome such forces. But that is our bet. It is a bet that may not succeed in changing the relation of forces and impose the fall of the government.

In any case, it is worth betting on. This is the only way to develop political and social forces which will give a basis to new institutions built in the struggles and which respond to the streets.

This is the only way to build the social bases of an anti-capitalist programme.

For more (in Portuguese) on the MES go here

Cooperation Has a Meaning: François Maspero and Monthly Review

The Meaning of Macron: Lessons from the Fifth Republic

Notes from the Editors, October 2021