The Moment King was Slain: How Opposition to Capital and Unification of the Poor Sealed his Fate 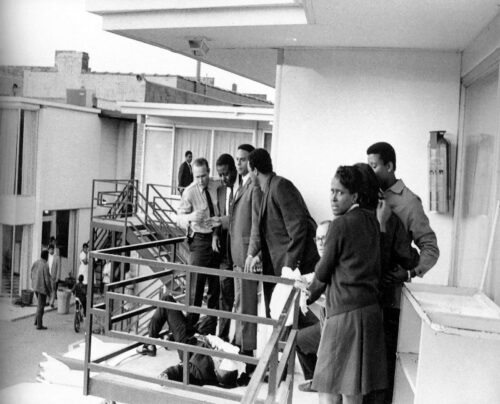 Dr. Martin Luther King Jr., civil rights legend and leader of the Southern Christian Leadership Conference, is murdered, the evening of April 4, 1968 at 6:01pm by an assassin’s bullet outside his room, #306, on the 2nd floor balcony of the Lorrain Motel in Memphis Tennessee. This brutal act shocks the conscience of the nation and the world. If a picture is worth a thousand words, this photo by Joseph Louw, the only photographer on the scene that day, is taken just minutes after the infamous shot rang loud.

King’s body lies in a puddle of blood caused by a-single-kill-shot to the head, which struck him on the right side of his face splintering his jawbone and severing his carotid artery. Reverend Ralph Abernathy, Vice President at Large for the SCLC, and close friend of King, is standing to the right of a Memphis police officer, having just placed white cloths over King’s wounds in a futile attempt to slow the bleeding. Abernathy is flanked by a panicked group of concerned associates and staff members including the renowned Rev. Andrew Young, Executive V.P. of the SCLC; and, Jesse Jackson. The young woman in the photo is turned back toward Louw with an expression of shock, fear and bewilderment, which encapsulates the horrors of this historic moment frozen in time.

In March 1968, after months of traveling the country gathering support for his Poor People’s Campaign, MLK arrives at the behest of his friend and fellow civil rights activist, Rev. James Morris Lawson, pastor of The Centenary United Methodist Church, in Memphis Tennessee. King then leaves Memphis to address the concerns of poor people in Mississippi. By this point, MLK had dedicated years of his life to the struggle for civil rights in the United States: From the 1956 marches in Montgomery Alabama to desegregate city-buses; to the 1965 marches in Selma for the right to vote.

On April 3, the day before his murder, King returns to Memphis to deliver the now famous I’ve Been To The Mountain Top speech, arguably one of the most profound and prophetic sermons of his life. In the speech, King seemingly prophesizes his own death: “Like anybody, I would like to live a long life. Longevity has its place. But I’m not concerned with that now.” King had spent months of exhaustive travel, crisscrossing America, fighting for the rights and dignity of poor people of all colors. This issue, the defense of the poor and their dignity, has always been problematic: the unification of the poor and demands for social-justice have historically stood as a threat to the establishment in the United States.

MLK and his movement of non-violent-civil-disobedience had come to symbolize that very threat. In fact, the movement demanded that Pres. Lyndon Baines Johnson end the Vietnam War and use the money domestically, by giving it to those that need it the most: America’s poor. MLK quickly becomes, in the eyes of America’s power elite, i.e., government officials and American business interests, a very dangerous man. In 1964, LBJ, under pressure from MLK and his movement, ends segregation with the Civil Rights Act and institutes a Voting Rights Act in 1965. That said, under both the Kennedy and Johnson administrations, J. Edgar Hoover’s FBI tracks King’s every movement for years, up until the moment of his death.

By the time King delivers his address in Memphis, on March 18, at the Bishop Charles Mason Temple, more than a thousand African-American sanitation workers walk off the job – after being savagely underpaid, brutally mistreated and forced to work in filthy conditions. To a rousing crowd, MLK calls for a general work-stoppage using non-violent-civil-disobedience. King states: “Don’t go back on the job until the demands are met.” On March 28, Memphis sanitation workers strike and thousands march alongside them bearing the slogan: “I Am A Man!” After The National Guard is brought in, and brutal and aggressive tactics by police are unleashed on demonstrators, Mayor Henry Loeb dismisses the workers’ demands and refuses to recognize their union. Fifty-seven-days after the strike began; Loeb is finally willing to talk. On April 16, just weeks after King’s murder, the workers’ demands are ultimately met.

This photo of MLK dead on the ground represents the loss of one of the greatest proponents of human rights in world history – not only for his people, but for all people of conscience. The SCLC was like an aggrieved family that had lost its father. Rev. Ralph Abernathy poignantly states: “I’m not concerned with who killed MLK, I’m concerned with what killed MLK,” referring to America’s long and brutal history of violence and racism. On April 8, 1968, a symbolic march takes place in Memphis, a profound gathering of resilience, homage to King’s life and struggle, led by his widow Coretta Scott King and their children. That struggle continues to this day.

Stephen Joseph Scott is an essayist associated with The University of Edinburgh, School of History; a singer/songwriter, humanist/activist – a self-taught musician, and performer. As a musician, he uses American Roots Music to illustrate the current American social and political landscape. Read other articles by Stephen.

The unification of Latin America: the realism of the ‘impossible’

The Fate of Teesside’s Industrial Heritage