The Most Important Climate Book Ever Written 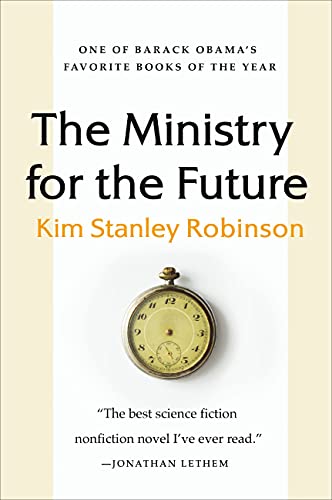 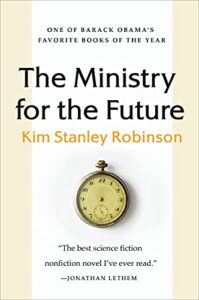 It was sort of like New Year’s Eve, except it was agreed it should be a simultaneous moment all over the Earth. Having it be the same very moment for all seemed right, it was important to feel the connection with everyone and everything. So the time came and we listened to the voices on our phones. We are the children of the planet, we are going to sing its praises all together, all at once, now is the time to express our love, to take the responsibilities that come with being stewards of the earth, devotees of this sacred space, one planet, one planet, on and on it went…

As I read through prolific science fiction writer Kim Stanley Robinson’s most recent novel, The Ministry of the Future, first published in October of 2020, I began thinking: why didn’t I learn about this before now, the beginning of 2022? Because if you are a person who gets it on the seriousness of the climate emergency we are in, this is nothing less than an absolute must-read.

Hope, hope grounded in an objective and scientific assessment of reality, is a powerful thing. No progressive revolutions have ever been made by hopeless people.

Robinson’s 564 page masterpiece begins in the middle of the current 2020s decade with a world-changing extreme weather event, a deadly heat wave in India which causes 20 million deaths, which in turn leads to a political revolution within India and a new progressive national government which, for the first time in the history of nation states, takes action to address the climate emergency at the scale needed. This was the turning point for the world.

25 years later, the earth’s physical reality had reversed course, first by the amount of CO2 in the atmosphere plateauing, and then, over a five year period, going down each year for a total of 27 parts per million, from 478 to 451 ppm. And with that huge accomplishment—or because of what made that accomplishment possible—the lives of people and all life forms on the planet had taken a definite turn for the better.

What, more specifically, happened that led to this huge result?

Some of it was not surprising: “increasingly stringent standards for carbon emissions among the six biggest emitting sectors: industry, transport, land use, buildings, transportation, and cross-sector” (p. 251)—a dramatic shift away from fossil fuels to clean, renewable energy as the primary energy source—widespread socialization of energy, ending it being a commodity for private profit—the substitution of energy efficient ships, planes and land vehicles for transportation, like mainly wind-powered “clipper ships” for ocean and river transport—and more:

“Regenerative ag, landscape restoration, wildlife stewardship, Mondragon-style co-ops, garden cities, universal basic income and services, job guarantees, refugee release and repatriation, climate justice and equity actions, first people support, all these tended to be regional or localized, but they were happening everywhere, and more than ever before.” (p. 455)

And there was much more, many positive environmental, social, economic and cultural changes.

How did it happen?

Absolutely key was the building and maintaining of broad coalitions of sectors of society who, in their massive numbers, made it increasingly difficult for the powers that be to not change.

One key tactic was massive occupations: “Despite this sense that the world was falling apart, or maybe because of it, demonstrations in the capitals of the world intensified. Actually these seemed to be occupations rather than demonstrations, because they didn’t end but rather persisted as disruptions of the ordinary business of the capitals. Within the occupied spaces, people were setting up and performing alternative lifeways with gift supplies of food and impromptu shelter and toilet facilities, all provided or enacted by the participants as if in some kind of game or theater piece, designed mainly to allow unceasing discourse demanding the official governments respond to the needs of their people rather than to the needs of global capital; and the governments involved had to face either siccing their police and militaries on their own people, or waiting out the occupations for what could be months, or actually changing in the way demanded. Time to dismiss the people and elect another one! as Brecht had so trenchantly phrased it.” (p. 286-287)

It happened via geoengineering, not a popular thing among more than a few climate activists. What were the specifics? It began after the 20 million heat wave deaths in India when, in response to popular outrage and pressure, the Indian government sprayed sulfur dioxide above and over the country to reflect sunlight away from the earth’s surface. It worked; and in the book it had little negative impact. A second, less controversial tactic was to spend tens of billions of dollars to drain water from the base of the great ice masses in Antarctica and Greenland. Doing so stabilized them and dramatically reduced sea level rise.

It happened through carbon taxes and through directly taking on the immense power of the world’s largest private banks. Some were nationalized. But the most effective way was through their being forced by massive, widespread political pressure, violent pro-earth terrorism (see below) and leadership by some within the system to bring them around to acceptance of a new, worldwide form of currency to replace, over time, dollars and marks and francs and pesos and all the others: a currency valued and accepted because it was based on investments in carbon drawdowns. A carbon currency. Carbon coins. “The new carbon coin had stimulated many short-term investments in carbon sequestration projects, and many longer-term investments in the coin itself. It had caused some of the biggest carbon owners to cash out and keep fossil carbon in the ground… They had created and paid out trillions of carbon coins, and yet had seen no signs of inflation, or deflation, for those who held that theory; no noticeable price change.” (p. 420-421)

And then there was the tactic of selective but violent terrorism, eco-terrorism, begun in India after the great heat wave die off. “It was a question of identifying the guilty [overwhelmingly the fossil fuel CEO types] and then finding them and getting to them. Methods were worked up over many iterations. Drones were best. Much of the job becomes intelligence; finding the guilty, finding their moments of exposure. Not easy, but once accomplished, boom. The drones keep getting faster and faster. The guilty often have defenses, but these can often be overwhelmed by numbers. The guilty died by the dozens in those years. Eventually, a decade into the campaign, they knew they were in trouble. The only thing we worried about was what the guilty ones always call ‘collateral damage.’ In other words, the accidental killing of innocents to kill your target. [We] were very fair and very meticulous. If to kill a hundred guilty you had to kill one innocent, no. It’s against the law.” (p. 135-136)

As someone not a pacifist but who believes that nonviolent tactics are generally the most effective and quickest way to build strong movements, this was the part of the book that I had the most trouble with. Relatedly, I was also troubled that there was nothing in it about the increasingly effective and continuing movements in the USA and elsewhere in the world to prevent the expansion of new fossil fuel infrastructure, like the Indigenous-led resistance to the KXL and Dakota Access and Line 3 and Line 5 tar sands oil pipelines, or the movement to stop expansion of the vast array of methane gas pipelines and infrastructure—gas is 86 times as powerful as CO2 over a 20 year time period–all over the US and elsewhere, the expansion of coastal terminals to ship out and ship in gas. There is a strong movement in the US against all of that, winning victories, preventing more and more of these from being built or putting up major, public battles to do so. Without question, the success of this movement can and will limit the power of the fossil fuel CEO’s and their financial backers to keep expanding. It will accelerate the needed shift away from fossil fuels to renewables, battery storage, energy efficiency and more.

Nonviolent tactics have been used to go after, to shame, to publicly embarrass and expose individual heads of corporations and heads of energy regulatory agencies. They have been visited at their homes. People have slept out overnight in front of their homes. Neighbors have been leafletted about the crimes committed by their neighbor. In years past powerful people have been “pied,” had a cream pie pushed into their face while in public.

And I am sure there are similar nonviolent tactics along these lines that exist or that could be evolved if they increasingly became seen as an important component of building the bottom-up movement which is an essential if Robinson’s vision, our collective vision, our rising demand for a new world is to come to be.

Hopefully, 25 years on, when the history of how the world changed over these years is written, Robinson’s book will be one of the things historians reference as to what helped to change it. Thank you, Kim Stanley Robinson.

Ted Glick works with Beyond Extreme Energy and is president of 350NJ-Rockland. Past writings and other information, including about Burglar for Peace and 21st Century Revolution, two books published by him in 2020 and 2021, can be found at https://tedglick.com. He can be followed on Twitter at twitter.com/jtglick. Read other articles by Ted.

‘Malcolm X, Che Guevara and Ho Chi Minh were important influences in my life and political…

Why is the labour theory of value so important? – explainer

In Copenhagen, the Radical Left Just Beat the Danish Social Democrats for the First Time Ever