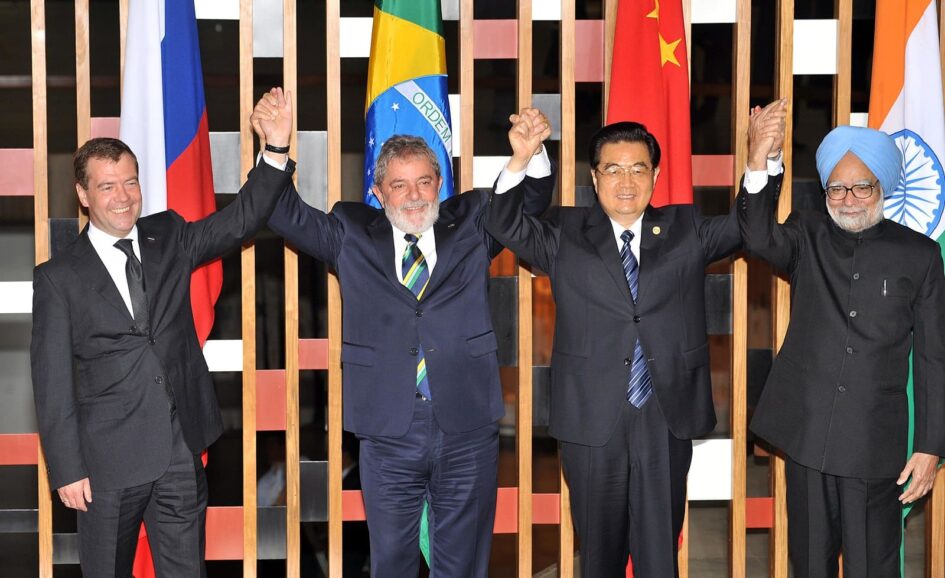 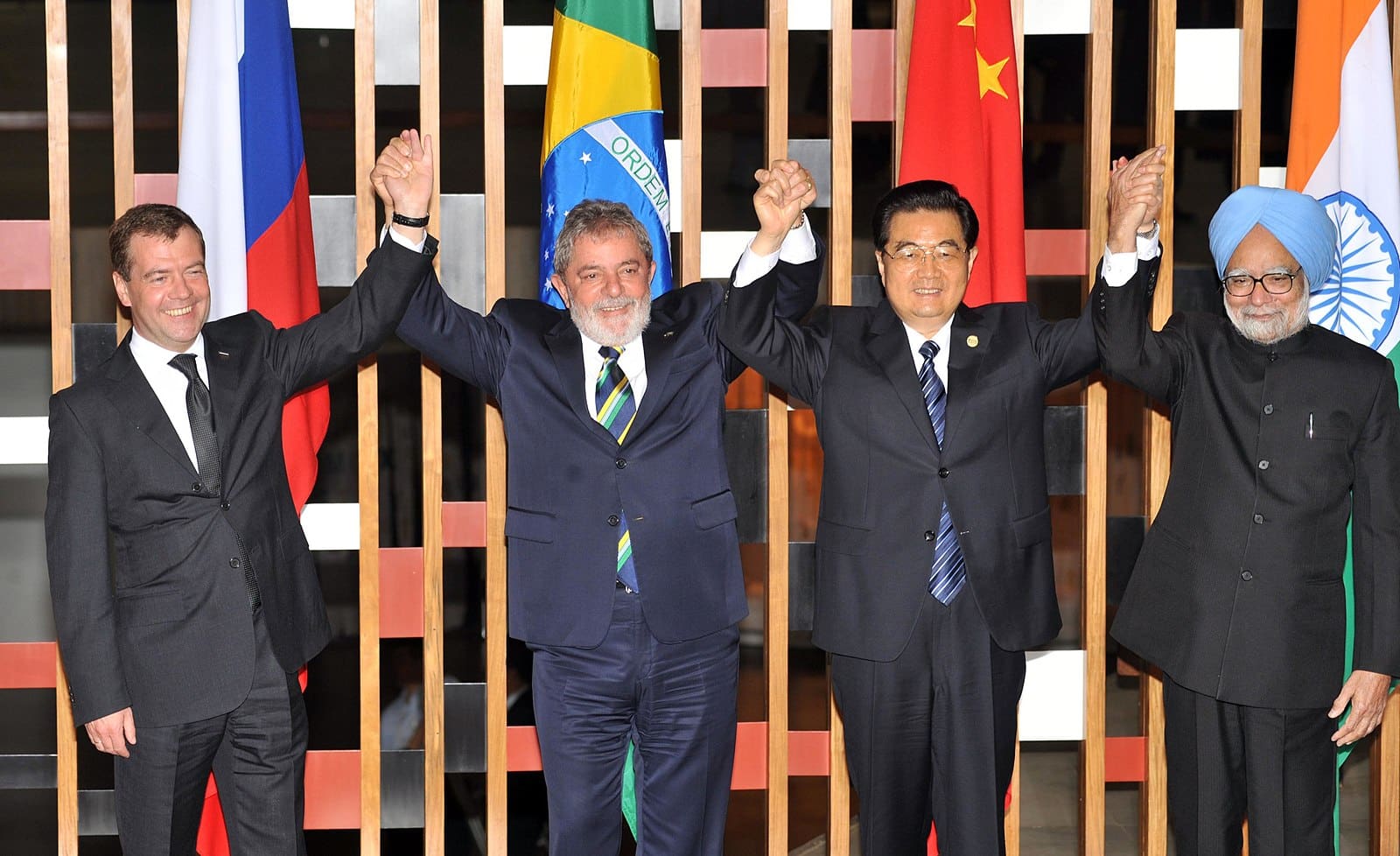 Above Photo: Brasília – The president of Russia, Dmitri Medvedev, Brazilian president Lula, the president of China, Hu Jintao, and the prime minister of India, Manmohan Singh, pose for an official photo during the 2nd Summit of Heads of State and Government of BRIC, April 2010. (José Cruz / ABr).

Belém, Brazil – I inaugurate this new series of columns in a New Year and a new beginning for Brazil with the inauguration of President Lula da Silva. His well-wishers poured out across the country in a revival of hope for Brazil after four years of disastrous rule under his right-wing predecessor, Jair Bolsonaro, who had fled Brazil for Florida on the eve of Lula’s inauguration. Bolsonaro left behind a mob that rampaged government office buildings before being arrested in large numbers by the police.

The mob tactics will not stop Lula, nor will they have a long-term effect in the US, where Donald Trump’s similar maneuvers on January 6, 2021, were also shut down. In both cases, demagogic politicians used social media to rile up a mob; in both cases, the mob was put down within the day.

The real issue, in my mind, is not the mob, but the deeper changes in the world that are generating growing tensions in world politics and economy. The deep changes can’t and won’t be stopped by mobs. Our real challenge is to understand the deeper changes at play so that we can manage them for the common good. Such an understanding is the aim of my future columns.

The biggest turmoil is geopolitical. We are no longer in a US-led world, nor even a world divided between the US and its rival China. We have already entered a multipolar world, in which each region has its own issues and role in global politics. No country and no single region can any longer determine the fate of others. This is a complex and noisy environment – with no country, region, or alliance in charge of the rest.

One reason why Lula’s return to the presidency is so consequential is that Brazil will be a key regional and global actor in the years ahead. Lula will work closely with like-minded progressive presidents in Chile, Colombia, Argentina, and elsewhere in South America. Brazil will also hold the Presidency of the G20 in 2024, part of a four-year run in which major emerging economies hold the G20 presidency (Indonesia in 2022, India in 2023, and South Africa in 2025).

The management of a multipolar world is fraught with difficulties. We urgently need more dialogue with other countries, and to move beyond the simplistic propaganda of our own governments. Here in the West, we are bombarded daily with ridiculous official narratives, most originating from Washington: Russia is pure evil, China is the greatest threat to the world, and only NATO can save us.

These naïve stories, spun out endlessly by the US State Department, are a great hindrance to global problem solving. They trap us in false mindsets, and even in wars that should never have occured and which must be stopped by negotiation rather than escalation.

When we accept the reality of a multipolar world, we will finally be able to solve problems that have so far eluded us. First, we will understand that military alliances such as NATO offer no answers to the real challenges that we confront. Military alliances are in fact a dangerous anachronism, not a true source of national or regional security. It was, after all, the US attempt to expand NATO to Georgia and Ukraine that triggered the wars in Georgia (in 2010) and in Ukraine (2014 until today). Nor did the NATO bombing of Belgrade in 1999, or fifteen year failed mission in Afghanistan, or bombing Libya in 2011, accomplish any real objectives.

Neither is China the grave threat that is portrayed today in the West. The US tries to pretend that we still live in a US-led world, and that China is a dangerous pretender that must be stopped. But reality is different. China is an ancient civilization of 1.4 billion people (almost one in five in the world) that also aims for high living standards and technological excellence. We will solve our global problems not by vainly trying to “contain” China, but by trading, cooperating, and yes, also competing economically with China.

Other great global challenges lie elsewhere: the deep dangers of environmental catastrophe; the rising inequalities in our own societies; and the onrush of new technologies that can disrupt the world if these technologies are not properly harnessed and controlled.

Brazil is the epicenter of the environmental challenge. Can the Amazon, constituting half of the world’s rainforests, be saved? Lula came to power promising to do just this. He won the vote of the Amazon states of Brazil. Globally, Europe is in the environmental lead with the European Green Deal. Europe’s main geopolitical opportunity is to encourage other regions, including the African Union, China, India, the Americas and others, to adopt their own bold green deals. That’s a far better task for Europe than expanding NATO, fighting an endless war in Ukraine, or confronting China.

Brazil is also an epicenter of inequality, with one of the highest degrees of inequality in the world. That inequality was originally created by European imperialism that suppressed indigenous peoples and enslaved millions of Africans. Their descendants continue to pay the price. Social justice is Lula’s calling, and our global calling, after centuries of racial and social injustice.

Brazil can also be an epicenter of the new technologies, for example a leader in the new bioeconomy in which the wonders of the Amazon’s and Brazil’s biodiversity are not destroyed for more cattle ranches but instead to produce new life-saving medicines, nutritious foodstuffs (such as the açai now booming worldwide), or advanced biofuels for green aviation.

Technological change is perhaps the deepest driver of global change. We need the new technologies to confront the crises of climate change, hunger, education and health. Yet we also suffer from the new digital technologies when they are misused, such as to mobilize mobs, or weapon killer drones in Ukraine. Advanced biotechnology may well have created the virus that causes Covid-19 (we still don’t know). Every day we confront the disruptions and inequalities caused by artificial intelligence, robotics, and the rapid overturning of jobs.

The confluence of global change, disruption, and danger is astounding. Solutions lie in understanding, cooperation, and problem solving. A better understanding of the New World Economy will be the aim of this column in the months ahead.

Tectonic Shifts in the World Economy: A World Systems Perspective

Finance capital and the World Economy

What has caused the unfolding chaos in the world economy?

World economy in chaos: What lies behind the crisis?

Divided World: The UN Emergency Resolution is Endorsed by Countries Representing Only 41% of the World’s Population

Minneapolis: Is the World on the Brink? Say NO to World War…