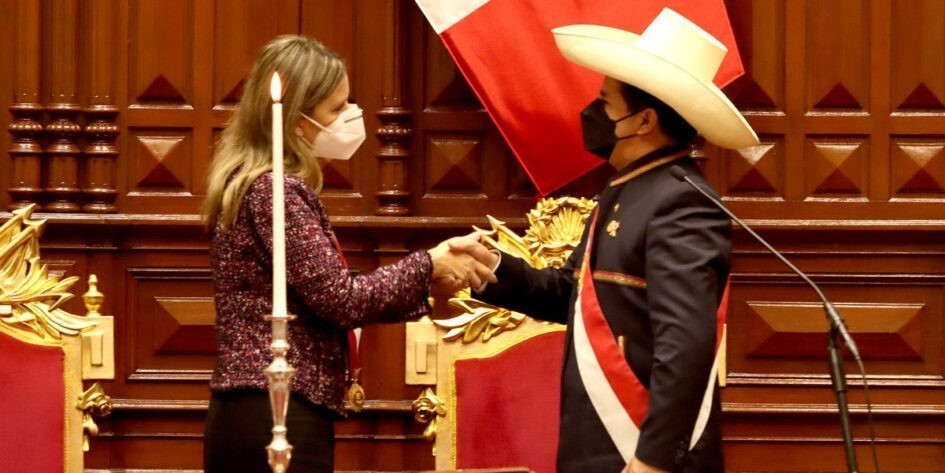 At around midday on 28 July, a man dressed in a suit and wide-brimmed white hat, traditional of his Andean region of Cajamarca, entered Peru’s congress to a shower of applause. Rural schoolteacher Pedro Castillo Terrones was sworn in as president of Peru for the next five years.

After an eventful election campaign in the middle of a pandemic that has hit the country hard, the teachers’ trade unionist and candidate for the far left party Perú Libre won the runoff by a margin of just 44,058 votes.

The election pitted capital city Lima against the country’s interior, especially the poorest Andean regions. In these areas, there were some ballot boxes where Castillo got every single vote. In Lima, which is home to a third of the population, conservative right-wing candidate Keiko Fujimori won every district.

Now just a few days into his term, the president has already been criticised over his appointment of a controversial chief of staff. But his proletarian origins and main campaign promises mean that Castillo brings hope of a paradigm shift in Peruvian politics.

From a strike to the presidency

In July 2017, Pedro Castillo led one of the longest teachers’ strikes in Peruvian history. The strike, which saw public schools closed for 75 days, was mainly over proposals to impose a new model of teacher assessment, with the so-called worst performers being fired. After several months, the government gave in and the strike was lifted.

Castillo’s role in the strike helped him to form links with Perú Libre and its leader, Vladimir Cerrón. A relationship which would ultimately lead to Castillo being selected as Perú Libre’s presidential candidate for the 2021 elections.

During his campaign, the teacher promoted left-wing economic policies, such as a change in the Constitution to allow certain strategic industries to be nationalised and to regulate the profits of foreign companies. Furthermore, he pledged to strengthen the public pension system.

Meanwhile, he took a conservative stance on social issues, saying that he opposed abortion, same-sex marriage and education with a gender equality perspective. ‘We have to throw that idiosyncrasy in the trash’, he said during his campaign.

In just two weeks, Castillo went from 3 per cent in polls to 19 per cent – low compared with first rounds in previous elections, but enough to make it to the second round (Peruvian elections have two rounds, unless one candidate surpasses 50 per cent of the vote in the first). His opponent was Keiko Fujimori, leader of the conservative right-wing party Fuerza Popular. Her father, ex-president Alberto Fujimori, has been convicted of crimes against humanity and widespread corruption.

During the campaign, Fujimori accused Castillo of wanting to impose ‘a communist model’ similar to those of Cuba and Venezuela. He denied his interest in emulating foreign models and made alliances with fellow leftists such as Verónika Mendoza, leader of Nuevo Peru, a progressive party with a more urban support base.

For Fujimori and Fuerza Popular, this was the third election in a row they had narrowly lost in the second round. As in 2011, with left-wing nationalist Ollanta Humala, and in 2016, with neoliberal Pedro Pablo Kuczynski (PPK), anti-Fujimorismo was a central element of the campaign. The 2021 elections once again saw anti-Fujimorismo trump any ‘anti-izquierdismo’.

And yet, with the vote count so close, Fujimori inevitably claimed fraud. With the support of right-wing politicians and intellectuals such as Mario Vargas Llosa, she presented the electoral committee with countless objections and appeals, delaying the formal declaration of victory for Castillo. Part of the population, especially in Lima, demonstrated in support of Fujimori, often calling for sedition and the rejection of the election results.

However, electoral observers from the Organization of American States and the European Union, as well as governments including the United States, stated that the elections had been fair and free from irregularities. Fujimori eventually conceded defeat.

During his inauguration speech, Castillo spoke in favour of the indigenous identity of Peru’s poor and highlighted his moderate economic position by announcing that he wouldn’t nationalise any private companies.

But the next day, following a ceremony in the Pampas of Ayacucho – significant as the site of South America’s last battle in the wars of independence against Spain – Castillo sparked controversy by appointing Guido Bellido as his chief of staff. The Perú Libre congressman is under investigation for comments made about the terrorist group Shining Path and has publicly expressed misogynist and homophobic opinions.

The rest of his ministers were sworn in the same day, with two exceptions. One of those was the economy minister, on the grounds that he opposed the appointment of Bellido. This hiccup alarmed the private sector and the Peruvian Sol dropped sharply. However, after a private meeting with Castillo on 30 July, the moderate leftist economist Pedro Francke was sworn in as economy minister, declaring that he stood for ‘sustained progress towards living well, with equality of opportunities and without discrimination by gender, ethnic identity or sexual orientation,’ a clear message to Bellido.

Liz Meléndez, director of the feminist NGO Flora Tristán, told Red Pepper that she welcomes the inclusion of Francke in the current government, adding that ‘it’s extremely important’ for an economy minister ‘to display the mainstreaming of gender perspective.’ She was fiercely critical of the appointment of Bellido because of his ‘deplorable comments about women’s rights and insulting the LGBT+ population. The president still has time to rectify and change his top minister and keep good people around him’, she added.

Congress versus the government

Peru has spent most of the period between 2016 and 2021 in a rolling political crisis that saw for presidents come and go. PPK’s presidency was hamstrung by Fujimori’s control of congress, a dynamic which would ultimately lead to his resignation in March 2018. In the ensuing legitimacy crisis, PPK’s vice-president Martín Vizcarra dissolved congress in response to his inability to pass reforms.

A year later, in November 2020, Vizcarra was impeached by the new Congress, with Manuel Merino sworn in as new president. Sustained protest against Merino led to the death of two young men at the hands of the police. Merino eventually resigned and Congress chose Francisco Sagasti as president to finally finish PPK’s initial term.

The picture is a little different for Castillo. His party has the largest majority in congress which will protect him from impeachment, although obstacles remain. Fujimori’s Fuerza Popular party has already announced their intention to remove his more controversial ministers.

Eduardo Dargent of Pontificia Universidad Católica del Perú, notes that ‘the choice of Bellido as chief of staff has ended up increasing tension’ between Castillo’s faction and opposing powers in Congress. ‘We’re in the hands of actors who have often failed us,’ he said. ‘Yes, there’s room to ease the tension a bit. But recent events, and the kinds of people who have made it into positions of power, won’t make it easy.’

In this scenario, there’s little choice but to wait and see what Castillo will do.

Paulo Rosas is a Peruvian freelance journalist based in Argentina, who mainly writes on Latin American politics. He is currently an editor at fact checking site PeruCheck.