The six-week strike of UC workers — some reflections 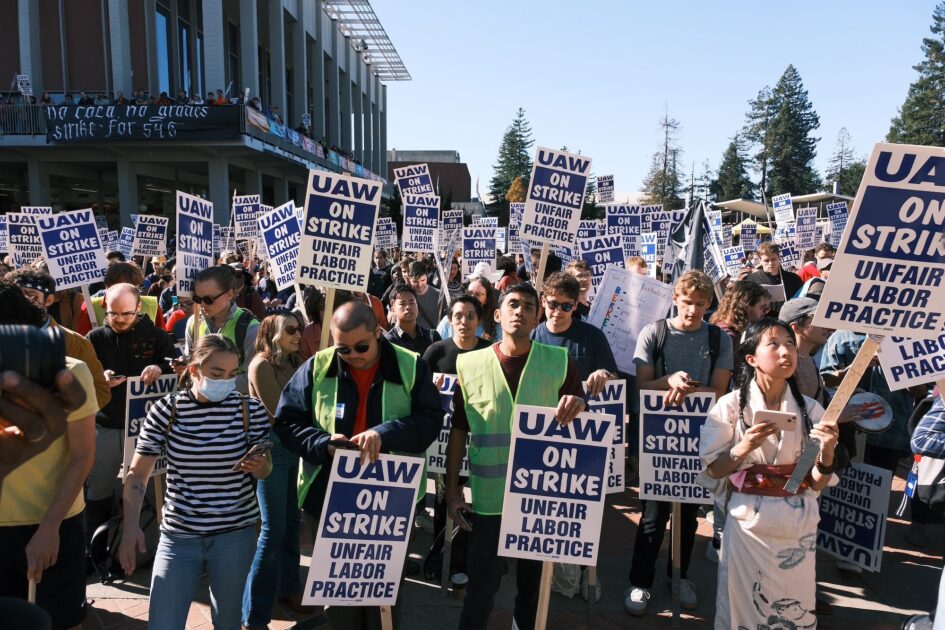 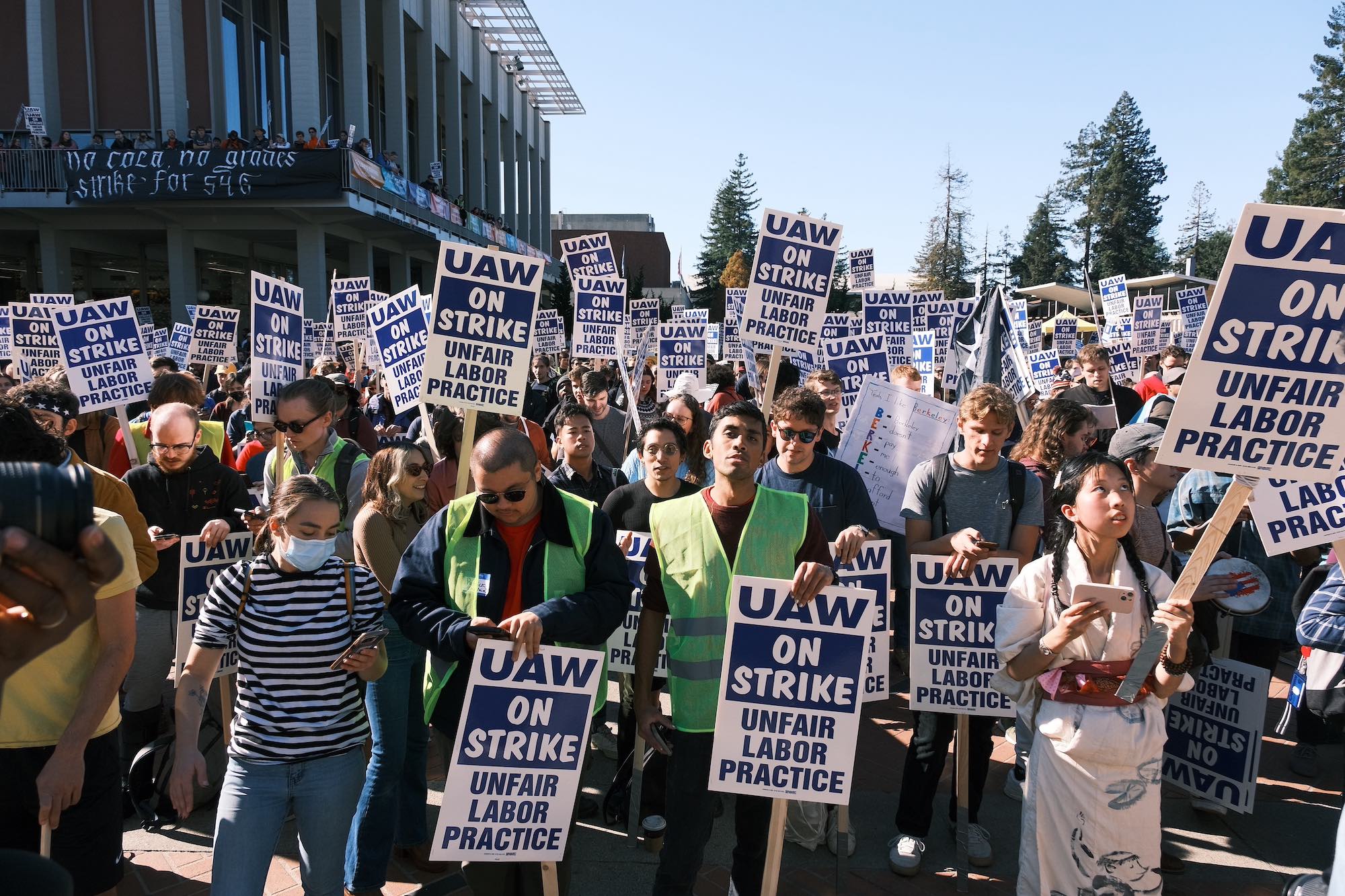 On Friday, December 23, the results of voting by two UAW locals at University of California (UC) still on strike were tallied. The results were fairly decisive, with members of UAW 2865 (representing teaching assistants, tutors, graders and readers) voting 11,386 to 7,097 for acceptance of the tentative agreement (TA), and SRU-UAW members (student researchers) agreeing by a larger percentage, 10,057 to 4,640.

Thus ended the six-week unfair labor practice strike, the largest academic strike in U.S. history and the largest strike in the U.S. in 2022. The strike began on November 14 with approximately 48,000 academic workers walking out, after lengthy bargaining by all the units involved. Over 35,000 voted to strike (98% of votes cast).

This number included not only the two unions mentioned above, but also post-doctoral scholars (8,000) and academic researchers (over 5,000), organized in two separate units of UAW 5810. The latter two unions had reached an agreement with the UC administration earlier, on November 29.

These unions, combined, operate at the ten different campuses of the University of California, an institution which is the largest employer in the state, with a budget of over $46 billion, including $5.1 billion in instructional and research funding. The first UC system-wide strike occurred in 1999, winning union recognition, followed by the first contract, negotiated in 2000.

Certainly, the issue of compensation was at the fore, especially with the members of Local 2865, who average just $24,000 annually. While post-docs and academic researchers have higher salaries, they are still low, considering the cost of living near most of the campuses. Most UC academic workers (over 70%) are “rent burdened,” paying over 30% of income on rent, and many over 50%.

Pay was linked to other issues, including housing supplements, support for using public transit (which has climate benefits as well), and childcare reimbursements. In addition, there were major concerns over job security and advancement.

The first two units to settle made significant gains. The post-docs received 7.2% increases for each of the next three years, and the academic researchers gained salary advances of 29% over five years, with some improvements in childcare reimbursements and transit incentives, as well as the elimination of fees for international scholars. It took three weeks more to reach an agreement with the Local 2865 and SRU-UAW members. The pay gains for 2865 moved the base from $23,000 to $34,000, and SRU compensation moved up to $35,564.50.

Rafael Jaime, president of 2865 said, “This ratification … shows how universities should support their workers.”

But there were many who were not pleased with the results. There was a strong “Vote No” effort. Fifteen out of 41 members of the bargaining team (SRU and 2865 together) voted to reject the TA. Some of the divide reflected different perspectives among the different campuses — for instance, increases for folks at Berkeley, UCLA and UCSF were higher (approximately $2,500) than at the other campuses — which caused some resentment, even given the higher cost of living in those areas.

The most militant opposition came from UC Santa Cruz, but there was resistance elsewhere, even at the new Merced campus. Although there were particular issues in contention at different campuses, the main wellspring of opposition was the decision of the coalition bargaining team (by a close vote) to drop the demand for a cost-of-living allowance (COLA) early in the bargaining process.

This decision exposed broader problems of internal procedures that lacked transparency and opportunities for member participation, and that seemed undemocratic to many members. For example, full participation of bargaining team members was made difficult because adequate notice of meetings was not provided and bargaining developments were not shared with the union rank and file.

There was also considerable resentment among some post-doctoral and academic researchers, who had been “assured” by unit leaders/staff that they would NOT be asked to vote on the November 29 TA before the 2865 and SRU teams reached agreements with UC — and then this promise was disregarded.

An interesting aspect of this strike was the role of DSA. While members participated in significant numbers (150 from East Bay DSA) at the pickets and larger mobilizations — the rallies in Oakland at the UC main office, in Sacramento at the state legislature, and at the UC regents meeting in LA — there was little coordination and discussion among the activists. This was especially problematic, since there were major differences among DSA members on tactics AND strategy, including how to relate to UAW staff.

These differences reflected the varied involvement of DSA members. Whereas some members were close to the top union leadership, others were mainly involved at the rank-and-file level, encouraging people to turn out for the pickets. DSAers played different roles at the different campuses. For example, DSA members connected to leadership played a moderating role at Berkeley, while DSAers at other campuses organized for a “Vote No” on the final settlement.

These internal divisions reflected the lack of an overall DSA fraction or working group to organize regular communication among DSA activists involved in the strike. This was obviously very difficult to create midstream, and so all the more reason DSA should have anticipated the need for such a structure, especially considering all the differences in levels of engagement.

This was the first non-electoral statewide labor project for DSA. Not only was it a strategic priority, but it involved a considerable number of members in leadership. In the Bay Area, DSA focuses on the Oakland Education Association, and individual members, backed by DSA labor activists, have been in leadership of a few major contract battles. But this statewide campaign had little coordination or democratic process.

The strike raised the question of whether or not DSA chapters should play a direct role in internal union debates, such as a “Vote No” campaign. Some comrades believed that, in line with advocacy of the “rank-and-file strategy,” DSA should support (or at least provide resources for) a “Vote No” movement to reject a contract that had some significant weaknesses. Others believed that DSA as an organization should not take a public stand and tell union members how to deal with their “internal” policy.

Without a statewide fraction or working group that could have provided coordination, there was no opportunity to discuss, and perhaps even resolve, these differences. Additionally, the reluctance to organize against the leadership’s recommendation reflected a broader tendency of DSA, in many labor battles where they intervene, to accept the views of the top leadership of a union, especially if it is perceived to be progressive.

Among the UC unionists there was some awareness of the Unite All Workers for Democracy (UAWD) reform movement inside the UAW. Certainly, the reform movement’s victory at the last UAW convention, which passed their proposal that strike pay should begin from day one, was very important for the UC strikers. However, unlike some of the UAW industrial segments, most UC strikers saw the International as rather distant. Their view was largely formed by their experience with the UAW staff at the UC campuses. For the UC union activists, the key question was how local staff functioned; and to many they appeared very heavy-handed and not interested in listening to members’ issues and frustrations.

There is concern by reform activists in UAWD that negative responses to the local UAW staff will lessen the participation of the many UC strike activists in the fight for a more democratic, militant United Auto Workers, still a bastion of the U.S. labor movement.

Despite the problems outlined here, the UC struggle reverberated across the state, with the AFL-CIO State Fed calling on all unions to support it and honor the picket lines, and Labor Councils, such as Alameda, trying to bring out members.

The strike also reverberated nationally. Workers at higher education institutions face a common situation — high inflation, unaffordable housing, limited healthcare, growing student debt, added to the major impact of the pandemic, staffing cuts and increased workload. They have a common struggle, reflected nationally in other battles, such as strike action at Columbia University and the New School.

Already, some university administrations, such as at Cal Tech and University of Washington, are offering significant increases in compensation for researchers to try to stave off such union militancy, and there are organizing efforts progressing well at University of Southern California (some of those involved at USC joined the picket lines at UCLA), Northwestern, Yale, University of Chicago, Boston University, and MIT. There are even organizing drives by researchers at such noted academic think tanks as the Rand Corporation and the Brookings Institute.

The tactics, especially around timing, through which the UAW activists brought pressure to bear on the UC administration are also worth replicating. Carrying on the strike through the conclusion of a grading cycle and withholding grades (while controversial) was very important. And, likewise, striking long enough to actually endanger some research projects.

Finally, the necessity of having strong communication and alliances with non-academic bargaining units, within and serving the university, such as the AFSCME and IBT workers, was essential. In the UC strike, this could have been better organized, but still proved effective.

UK Strike Wave Escalates As Over 200,000 Walk Out This Week