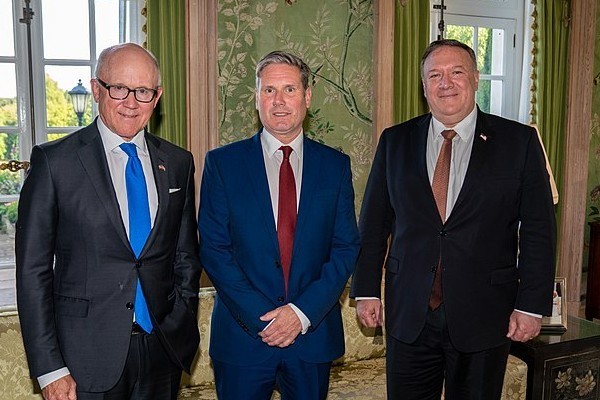 Keir Starmer poses for a photo with Trumps Secretary of State, Mike Pompeo (Right) in July 2020

Labour leader Keir Starmer wants to rub the left’s face in its defeat after his victories at the party’s conference last week.

Starmer made a point of insulting the left—and ­working class people—by writing a column for the Sun newspaper on Sunday.

Party members and some trade union officials demand Labour MPs don’t write for the Sun because it lied about the Hillsborough disaster victims.

The Sun falsely blamed Liverpool supporters for the crush at Hillsborough stadium in 1989, which killed 97 people.

It is widely boycotted in Liverpool, and delegates at last week’s Labour conference called for it to be banned from the venue.

But right wing Labour MPs insist on writing for the Sun almost as a point of principle.

They say it makes Labour electable by appealing to right wing voters.

And they celebrate the Sun’s support for Tony Blair.

Starmer’s choice to write for the Sun was a deliberate insult to the left—and a betrayal of his leadership campaign promise to refuse interviews. It was also an attempt to appease right wing Labour MPs.

They are frustrated that his lurch to the right has not made Labour more popular than the Tories in opinion polls.

Many say the answer is to intensify the party’s war on its left wing activists—and adopt an even more right wing leader.

It comes after Starmer used his Labour conference speech to prove to the media, the bosses and Labour MPs that they should let him remain as leader.

After giving MPs more power in leadership elections, he said, “It has been so important to get our own house in order this week and we have done that.”

He rejected the ­radical promises of spending on new public services or state ownership that bosses and the media had branded unrealistic.

Most symbolically of all, he praised Tony Blair’s government—to huge cheers and a standing ovation from right wing members in the room. Starmer also made a point of demonstrating his support for the cops, the ­military and nationalism.

He tried to mimic Tory home secretary Priti Patel by promising tougher sentences for criminals and a crackdown on “anti-social behaviour.”

And while he had plenty to offer bosses and “British business” he had nothing but platitudes for working class people.

A Labour spokesperson described the speech as to where Starmer “set out what he stands for.”

His speech—and his Sun newspaper article—show that his Labour Party is in the pockets of business and Rupert Murdoch’s media empire.