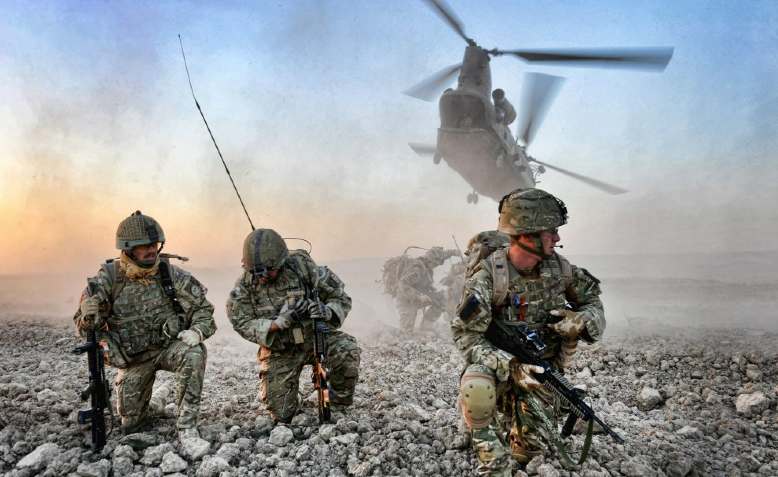 The defeat in Afghanistan has shattered Britain’s imperial fantasies and exposed the lies about humanitarian intervention, argues Terina Hine

The defeat in Afghanistan shows the government’s belief in “Global Britain” represents nothing more than an imperial fantasy based on hubris. As Parliament is recalled to debate Afghanistan on Wednesday, few of our politicians will face up to this truth, instead we will hear plenty of posturing from those who want the UK to remain in the beleaguered country and blame the US for cutting short the 20-year long Afghan war.

The current shambolic withdrawal and accompanying humanitarian crisis shows the UK’s role as junior partner in sharp relief. Neither the UK government nor its military supported the withdrawal as set out by President Biden in July, but their views held no sway. For the last two decades the UK has been supporting the US Afghanistan mission of regime change, but has had little influence over either tactics or strategy.

Defense Secretary Ben Wallace accused former President Trump of failing his responsibilities by negotiating the withdrawal deal with the Taliban in Doha, and for announcing its timescale publicly. Along with the EU and Nato, many British MPs and the military chiefs have placed the blame at President Biden’s feet for implementing Trump’s plan. Of course, none blame themselves for supporting the never-ending War on Terror to begin with; had they listened to campaign groups like the Stop the War Coalition they would have known this venture was always going to end badly.

Ever since Blair’s 1999 Chicago speech, where the doctrine of liberal humanitarian intervention was launched, the US, UK and Nato have been following an interventionist foreign policy sold to the public as liberating the world from brutal dictators and, in the case of Afghanistan, saving women. The policy was always doomed to fail. Even the Foreign Secretary admitted on live radio this morning that attempts to impose liberal democracy on Afghanistan were never likely to succeed. Biden has even denied this was ever a goal. Although back in 2001 the war and invasion was touted as being as much about saving Afghani women and spreading “our democratic values” as it was about saving the world from terrorism.

But the real goal of the UK government was always quite simple: to demonstrate that we were Washington’s most reliable ally and still had skin in the geopolitical game. That was why Blair was so keen to support war in Afghanistan and in Iraq and why successive government’s stood by the Afghan project for so long, even when the inevitable was clear for all to see.

The US has experienced humiliation in the eyes of the world this week. The BBC’s John Simpson has predicted that the war’s failure along with the viral images of chaos and panic at Kabul Airport, will herald “a new era of feebleness, uncertainty and decay for the West”. Maybe – it is certainly a major defeat for the West. But others predict that Biden will weather the international embarrassment and maintain support for the withdrawal from a war-weary US public. As one of the world’s major international players the US is unlikely to become strategically insignificant overnight; after all the fall of Saigon did not put an end to US imperialism so why should the fall of Kabul?

Plus the US has a strategy that will keep their jaunts alive a while longer – small numbers of troops reinforced by drones from numerous strategically placed military bases. It is a strategy that greatly reduces costs both in terms of the lives of US forces as well as dollars spent. So be warned – air strikes on Afghanistan, just as on Iraq, will continue whenever the US Commander in Chief sees fit. Also note that in his address to the nation President Biden invoked the threat of Iran, Russia and China; the Afghan adventure may have been wound down, but US international posturing certainly has not.

For the UK however, what has been proven beyond doubt is that our influence on our partner in crime, as with the rest of the world, is severely limited. The boasting by Boris Johnson in the government’s Integrated Review: that “The United Kingdom will be a beacon of democratic sovereignty and one of the most influential countries in the world … [and] will play a more active part in sustaining an international order” has been shown up for what it is. It is surely time the British establishment accepted that we are no longer an imperial power, can no longer call the shots and are instead tied to the coattails of the US.

At tomorrow’s Commons debate MPs should recognise the war in Afghanistan was a catastrophe and what we are now witnessing are its consequences. Never again should the UK blindly follow the US into its foreign wars; the tragedy of Afghanistan must never be repeated.

Join the protest at Parliament Square 9am Wednesday 18 August and say No to Foreign Intervention.