The U.S. military is poisoning Okinawa 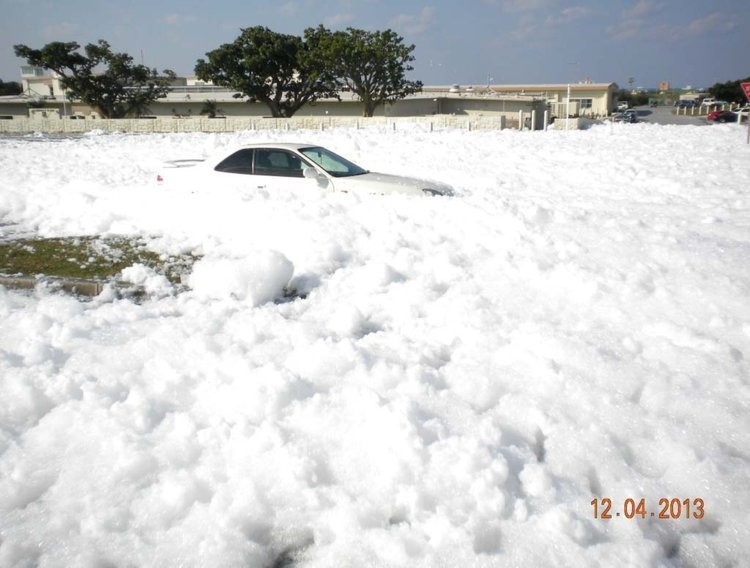 Blood Testing Confirms High Levels Of Carcinogen Pfas In The Blood Of Hundreds Living Close To US Base. Japanese Demand Answers While Americans Deny Responsibility.

An Okinawan group of activists and physicians known as the Liaison to Protect the Lives of Citizens Against PFAS Contamination has taken the extraordinary step of collecting and analyzing blood samples from 387 residents of the tiny island who live near several U.S. military installations. The results confirm the worst fears of Okinawans regarding the military’s reckless use of PFAS over the last 50 years.

Average blood levels for three PFAS compounds: PFOS, PFOA, and PFHxS, were about 25 nanograms per milliliter, (ng/mL), or parts per billion, for those tested from the cities of Ginowan, Kin Town, and Chatan.

Marine Corps Air Station Futenma is located in Ginowan. Kadena Air Base forms the northern boundary of Chatan, while Camp Hanson  is located in Kin Town.  All three bases have a record of environmental releases of the carcinogenic chemicals.

The highly influential American National Academies of Sciences, Engineering, and Medicine (National Academies) is warning Americans with much lower concentrations of the carcinogens in their blood to be screened for a host of serious illnesses. The U.S. military denies it is poisoning Japanese citizens and forbids the Japanese government from gaining access to military bases to verify the source of the deadly contamination.

This was the first extensive survey to try to gauge the impact of PFAS contamination on people living on the island.  Okinawa comprises 0.6 percent of the Japan’s land but contains 70 percent of the land used for US bases, and over half the 50,000-strong troop presence.

The Okinawan results take on added significance with the publication of Guidance on PFAS Exposure, Testing, and Clinical Follow-Up by the National Academies of the Sciences, Engineering, and Medicine (NASEM) in July of this year. The 159-year-old organization provides scientific advice to the United States government.

National Academies is advising clinicians to offer PFAS blood testing to patients likely to have a history of elevated exposure, like firefighters or patients who live or have  lived  in communities where PFAS contamination has been documented. This would include pretty much everyone in Okinawa.

The National Adademies says there is an increased risk of adverse health effects if the total of these seven compounds exceeds 2 ng/mL:  PFOS, PFOA,  PFHxS,  PFNA, PFDA, PFUnDA, and MeFOSAA. The Okinawans only tested for three compounds. If they had tested for all seven compounds, the results would likely have been much higher.

For patients with a serum PFAS concentration of 2 ng/mL or higher and less than 20 ng/mL, clinicians should  encourage PFAS exposure reduction if a source of exposure is identified, especially for pregnant women. Within the usual standard of care clinicians should:

LDL cholesterol is considered the “bad” type of cholesterol. That’s because it can build up and form clumps or plaques in the walls of your arteries. Too much plaque in the arteries of your heart can cause a heart attack.  HDL is the “good” cholesterol because it helps remove LDL from your blood.

PFAS compounds are also known to cause hypertension, a clinical term for high blood pressure.  Your blood pressure measurement takes into account how much blood is passing through your blood vessels and the amount of resistance the blood meets while the heart is pumping. Hypertension occurs when the force of blood pushing through your vessels is consistently too high. This condition can be extremely dangerous to pregnant women.

PFAS is linked to breast cancer in women and men. Physicians should know PFAS levels to take necessary precautionary steps to protect against breast cancer.

For patients with serum PFAS concentration of 20 ng/mL or higher, clinicians should perform the following tests during all routine visits:

These harms include reproductive issues like changes to fertility, early puberty and risk of low birth weight, obesity, diabetes, immune system impacts, cardiovascular and respiratory problems, several types of cancer, and neurological and behavioral problems. The developing fetus, infants and children are especially vulnerable since their physiological systems are still developing.

PFAS are directly related to kidney cancer.  Military and civilian firefighters who  work with firefighting foams containing PFAS or wear turnout gear containing PFAS are exceptionally vulnerable. Others who work on American military installations may be exposed to extraordinarily high levels of the carcinogens while chrome plating engine parts or cleaning engine parts, two processes that involve the use of PFAS.

Ordinary folks in Okinawa who live off-base may be exposed by drinking poisoned water, eating contaminated food, breathing contaminated air, or coming into contact with carcinogenic dust in their homes.  When the US military releases the toxic chemicals into streams and rivers, the banks dry and the carcinogenic materials are lifted into the air to settle in people’s lungs and as dust in their homes.

The United States Army, Marines, Air Force, and Navy have all contributed to this preventable epidemic in Okinawa. They should be made to pay for blood testing and costly clinical interventions for all of the residents of the island.

The Liaison to Protect the Lives of Citizens Against PFAS Contamination has urged the central and prefectural governments to investigate the health impact among residents and to identify the source of the contamination.

Okinawan health activists have sought to gain on-site access to U.S. military facilities known to be the source of the contamination but their efforts have been in vain. Under the terms of the Japan-U.S. Status of Forces Agreement, consent must be given by the U.S. side, but none has been forthcoming.

Article 3, Section 1 of the U.S. – Japan Status of Forces Agreement, or SOFA is blocking Okinawan authorities from entering U.S. bases. Japan was defeated by the imperial forces of the United States during World War II and continues to pay the price as a conquered nation.

Toshio Takahashi, a spokesman for the Okinawan group, told Military Poisons, “It has been shown that PFAS contamination causes cancer and can affect fetal development and cause disease in small children, so investigating the cause and cleaning up the contamination is essential in order to protect the lives of residents and fulfill our responsibility to future generations.”

Takahashi says he has heard that progress is being made in the U.S., where the military has investigated PFAS contamination and has assumed some degree of responsibility for the cleanup.  “This is not the case of U.S. troops stationed here,” he argues. “Such double standards are discriminatory and disrespectful to the host countries and to the regions where U.S. troops are stationed, and cannot be tolerated,” he said.

Although the United States Forces Japan (USFJ) does not usually comment on charges of toxic contamination, USFJ issued the following statement in response to the blood testing:

“We are aware of the recent survey by a private organization regarding PFOS levels. We are committed to the well-being of those that live on and near our bases and will continue to coordinate with the Government of Japan to ensure we remain compliant with our international obligations and serve as good stewards of the environment. The U.S. Forces Japan engineer team regularly consults with their counterparts in the Government of Japan and will continue doing so.”

Putting the Okinawan results into perspective

The following communities in the United States have attracted national attention for dangerous levels of PFAS found in the blood samples of residents exposed to the toxins. Their levels, generally, are much lower than those found in Okinawa.

In New Hampshire, the state conducted biomonitoring in Merrimack Village District in 2017, where a Saint-Gobain plant had contaminated local drinking water. The average PFOA serum levels among participants was 3.9 ng/mL (N = 217).

Also in New Hampshire, between April and October 2015, 1,578 members of the Pease Tradeport community had their blood tested for PFAS. The site was the location of Pease Air Force base where firefighting foams containing PFAS were carelessly used for many years.  Results of biomonitoring from all individuals in the study showed  a cumulative total of 15.8 ng/mL for PFOS, PFOA, and PFHxS.

Communities in Bucks and Montgomery counties in Pennsylvania detected PFOS in their drinking water from use of firefighting foams during military activities. In response to this water contamination, the state health department conducted biomonitoring for PFOS exposure among 235 residents. The average PFOS serum level in this community was 10.2 ng/mL

In 2020, the European Food Safety Authority (EFSA) estimated that women with blood levels for four compounds: PFOA, PFOS, PFHxS, and PFNA that exceeded 6.9 ng/mL were at risk.

Now that the National Academies of Sciences has equated specific levels of PFAS in blood plasma to general risk levels, people like firefighters and those with known occupational exposure to these chemicals ought to be lining up to be tested.

Medical science has not figured out a way to rid these chemicals from our bodies. Certainly, individuals with high levels must treat their symptoms, but they must also join with others communally and globally to stop the exposure. They can install municipal and private water filters. They can stop using nonstick pans and they can rid their homes of consumer items that contain the chemicals. They must also collectively demand remediation, even if the perpetrator is proven to be the United States military or powerful corporations that provide jobs to thousands in the community.

I’ve been writing about the military’s wanton use of PFAS for nearly five years and I’ve come to realize that my research and writing – and the work of others doing the same are limited in their impact. Legislative and executive avenues for addressing criminal actions by government and corporate entities regarding the continued use of PFAS are constrained. The EPA is still not regulating these chemicals while most states look to the EPA for guidance. Meanwhile, judicial remedies offer great promise for administering justice.

Commercial labs typically charge about $600 for a PFAS blood test while many doctors and insurance companies have never heard of the toxins.  The Downs Law Group in Miami, Florida is offering free blood-serum testing to military and civilian firefighters and others with likely occupational exposure to the carcinogens. They will pay for individual blood tests without any kind of commitment. They can sue the manufacturers of these chemicals for damages after discovering elevated PFAS compounds in blood serum.

I first learned of the Downs Law Group when they sponsored the SAFE EPA Protest in Washington in September with a substantial contribution.

The Downs Law Group has done heroic work defending the health of people living along the gulf coast who have been sickened by BP’s use of Corexit, a chemical oil dispersant that was widely used after the 2011 BP Deepwater Horizon oil spill. They are helping to fund my research and I am helping them understand how the military poisons communities with these toxins.

The US military is poisoning the water in O’ahu

No to war with Ukraine! Against Russian military intervention!

The Military’s Return to Brazilian Politics