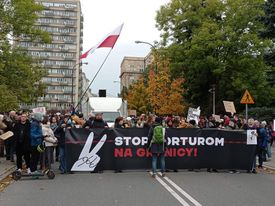 A humanitarian emergency is once again developing on the European Union’s borders: Refugees find themselves trapped between Poland and Belarus as Polish government takes increasingly aggressive action and even declared the state of emergeny in two of its regions.

On Wednesday, 20 October, . The total number of refugees who are known to have died in recent weeks trying to cross from Belarus to Poland has thus risen to eight. Groups of refugees – from Afghanistan, Iraq, Kurdistan, Syria – have been left in no-mans land in the forests and bogs along the border between the two countries. They lack food, water, clothes and shelter and the situation is worsening as winter approaches. Some of the refugees have accused both the Polish and Belarussian authorities of treating them violently.

Thousands of refugees have arrived in Belarus in recent weeks, expecting that they could then travel to the European Union. Following the Polish government’s and European Union’s active support for the opposition movement in Belarus, the Belarussian authorities have responded by not preventing refugees from trying to cross the Polish border. The Polish government has accused them of engaging in a ‘hybrid war’ with Poland and actively encouraging the refugees to attempt to enter Poland. If this is true, then the Polish government has played into the Belarussian government’s hands through its inhumane treatment of refugees, allowing them to portray Poland as a state that does not respect human rights.

The Polish government has maintained the hard stance it took against refugees in 2015. Then, the new Law and Justice (PiS) government refused to accept its previously agreed quota of refugees as a European Union member state. During the parliamentary election campaign that year, PiS whipped up hostility towards refugees, with its leader, Jarosław Kaczyński, claiming that they could bring diseases to the country. This time the government has gone even further in its actions and rhetoric.

The Polish security forces have reportedly illegally pushed back refugees, including children, over the border to Belarus. Hundreds of soldiers have been deployed and a razor-wire fence constructed along the border. At the end of August, President Andrzej Duda, at the request of the government, issued a decree to introduce a state of emergency in the region along Poland`s border with Belarus (voivodeships of Podlaskie and Lublin). Here, some constitutional rights (such as public gatherings) have been suspended and only those who live or work in the area are allowed to enter the region. The decree prohibits people taking photographs around the border area, including of guards, police, military and border infrastructure. At the end of September, the Polish parliament voted to further extend the state of emergency after the initial 30 day period expired. Then in the middle of October MPs voted to construct a new wall on the Belarussian border, estimated to cost over €353 million.

The introduction of a state of emergency means that activists, NGOs and journalists are unable to either record what is happening along the border nor provide help for the groups of refugees sheltered there. This allows the government to further dehumanise these people and to turn society’s attention away from their suffering. During a press conference, government ministers claimed to have obtained material from the refugees’ mobile phones, including pornographic images and links to terrorist organisations. Despite the flimsiness of this evidence, the government is trying to paint the refugees as being ‘deviant’ and a terrorist threat.

Although the Polish government’s rhetoric is particularly brutal and xenophobic, its actions are generally supported by the European Union. Every year thousands of refugees die trying to enter the European Union and many of these deaths have been attributed to the European Union’s border agency Frontex pushing back refugees escaping wars. The EU foreign affairs chief Josep Borrell has said that it stands ‘in solidarity with Lithuania, Latvia and Poland and we are ready to take all measures to support them if the situation continues deteriorating.’ Donald Tusk, former President of the European Council, and current leader of the main Polish opposition party Citizens’ Coalition (KO), echoed the government’s hard stance against refugees, stating:

The wave of negative propaganda has resulted in a growth in hostility towards accepting refugees in Poland. In a recent opinion poll nearly 55 percent of respondents said that Poland should not allow refugees to enter Poland (21.1 percent that they definitely should not); with over 38 percent believing they should (just 7.4 percent that they definitely should). Also, over 47 percent of Poles support building a wall on the Polish-Belarussian border, against over 22 percent that are against its construction. The Polish government has successfully managed to convince the majority of society that refugees are a threat to society and have turned attention away from the human suffering. However, the worsening humanitarian situation on the border is beginning to shift public opinion in some areas. For example, when asked about the Polish government sending back a group of Iraqi and Kurdish families across the border, 49 percent answered that they regarded it negatively and 36 percent positively.

Despite the support given by Tusk to prevent refugees crossing the border, some politicians from his party KO have actively campaigned to help the refugees and KO MPs voted against extending the state of emergency and building a border wall. KO look to the European Union for support and have urged the government to allow Frontex security forces to help police Poland’s eastern border. The past actions of Frontex suggest that this would not improve the situation. In fact, PiS politicians regularly refer to the support they have been given by the European Union and argue that they are acting in line with its wishes.

The centre-left grouping (the Left) in parliament has taken a principled stance of opposing the government’s actions. They have focussed on the issue of protecting the health, lives and rights of the refugees and opposed them being pushed back across the border. Groups of activists and NGOs (such as the Ocalenie Foundation) have been attempting to both help the refugees and raise consciousness in society about their plight. Mobilisations against the government’s actions were initially small, but have grown in size as the situation on the border has worsened. On Sunday, 17 October, demonstrations were held around the country, including in the capital city of Warsaw where thousands of people marched under the slogan: “Stop the Torture on the Border”. Demonstrators carried flags made out of thermal blankets to symbolise the current suffering of refugees and the need to provide them with help and support. Such actions are essential to maintain pressure on the Polish government and European Union and remind the population of the awful events unfolding on its borders.

The Conference on the Future of Europe: Background and Structure