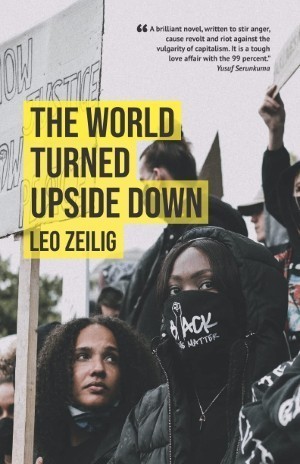 The World Turned Upside Down, a speculative fiction novel, is a compelling story of global exploitation and resistance driven by a complex protagonist, finds Hannah Cross

Bianca Ndour, the protagonist in Leo Zeilig’s The World Turned Upside Down, travels the world as a famed scholar activist. She has particular ties to Nigeria, South Africa, and her mother’s native Senegal. In her London life, she faces a pair of increasingly suspicious police officers who are trying to understand a global spate of murders of the 1% – the financiers, moguls, barons, heiresses, industrialists, entrepreneurs, speculators – whose greed has created devastation, misery and death. A blog emerges from ‘The Revealer’, posting on climate apartheid, land grabs and food speculation. They call for readers to ‘go on or die!’, to obliterate the rich rather than tame or tax them. The rich perpetrators are identified along with their daily habits, presaging their violent demise.

There is a speculative element to the story by which the rich have an advanced plan to bunker themselves and the pandemic has happened at an earlier point. However, the world is so similar to our own, it leaves more surprise that such a global movement has not emerged. Of course, this is a fictional exploration of the violence of the system we live in. Revealing at times a naïve earnestness of the rich as well as their sociopathic tendencies, and exposing the unhinged qualities of the blogger, the book does not endorse or glamorise its imagined strategy as a realistic way of achieving system change. It does, however, highlight the hypocrisies around the question of violence.

It is not only the murders that are turning the world upside down, but also Bianca’s lectures and talks. From her successful ‘Elation of Being’ book, part of the industry promoting inner transformation, Bianca has moved on to uncompromising political economy. She dismisses the book as the result of a personal breakdown. ‘There can be no peace within ourselves’, she argues; instead we must resist and change the world (p.60). She lectures people on the richness of Africa’s history against the ‘puny, pathetic, terrible’ history of a blood-soaked Europe (p.158). She was a ‘Shell child’ whose Scottish father, in the oil industry, shaped her worldview in dual ways. He taught her Walter Rodney’s How Europe Underdeveloped Africa on one hand, and sent her to the living horror of oil exploitation in the Niger Delta, with tragic effects, on the other.

Shocking her audiences with videos of collapsing factories or the use of props, like bin bags full of cash bribes, Bianca does not only inspire students who will fiercely protect her when the time comes. She is also revered by the bourgeois leftists who opposed apartheid and talk revolution but live in entitlement.

‘It was macabre, but I’d long given up fighting against myself – trying endlessly somehow to be less than who I was’, Bianca muses (p.17). This exhausting fight might also symbolise a left and anti-racist movement which is continuously blunted, silenced and forced to negotiate the impossibly narrow democratic channels for resistance within the workplace and the state. Our formal representatives and institutions act as though good behaviour, compromise and moderation could earn respect from a barbarous capitalist class or as if the ‘dead weight’ of the capitalist class’s ideas and expertise could be sufficiently challenged by better ideas. Nelson Mandela, in Bianca’s view, was a ‘poster boy of the global pandemic of unconsciousness’, ‘the usurper of real movements and freedom’ and the world needed to be reset (p.74).

The personal and the political

Hence Bianca embodies the urgency for a different world and this honest living gives her a genuine elation; ‘the glow of rage and a joy that was hard to hide’ (p.169). Her joy is found in Nina Simone’s words that shake and move the world or in the return to Senegal where she is complete, no longer forced to be a black person making herself known in a white world (p.91). She also finds joy in the Cape Town fires targeting the wealthiest and most impermeable neighbourhoods, the places where white men ‘couldn’t even see the world under their feet’ or understand how another culture could be free from the mass wars, commodified slavery, colonialism, holocausts and environmental annihilation of capitalism. It is not only Bianca, with her trauma, impulsiveness and violence who finds beauty in the destruction but also, contextualised by South Africa’s particular history, the people around her are mesmerised. They name the fire ‘comrade’ as it progresses in neighbourhoods they have cleaned or guarded, and ‘decolonisation’ as it reaches Cecil Rhodes’ cottage.

The police close in on Bianca as she publicly refuses to condemn the violence and suggests it is an uprising and reckoning. The fact there are two recognisable Churchill biographers on TV, insisting on her condemnations, highlights the hypocrisy of the elites’ demands that the people sanitise themselves, just as the freedom struggles of Gandhi and Mandela were stripped of all militant rhetoric once it suited the ruling class. US functionaries preach these mythical non-violent methods and ‘maturity’ to the movements struggling against murderous imperialism.

This is not a book of revenge and retribution – it is equally based on love, humour and the captivating moments of solidarity that emerge lucidly in Zeilig’s novels. Vignettes of the women Bianca has loved leave her wondering, punched by grief and cruel recollections, if we are all in the wrong relationships, while there is at least as much warmth and affection in her life, even with a key adversary, as there is hard-hearted violence. The struggle against capitalism is, after all, a struggle for decency, dignity and humanity and this is key to the solidarity and action that truly changes the world.

Zeilig’s urgent and compelling novel shows a move against the rich and the conception of a class war to overturn the fast and slow murders that the elites visit on the masses in plain sight. In Akala’s lyrics that echo Bianca’s arguments and life experience, Who said money makes the world go round? They just didn’t know, murder runs the globe. Bianca kicks back, spins and floors the oppressors. She delivers zingers with her martial arts, with the solidarity of the oppressed and even some of the henchmen. The book’s characterisations of Bianca and the people around her, the intricate plotting and messy, complex struggles and relationships, invite a sequel to carry on the momentum of the uprising. Go on or die!