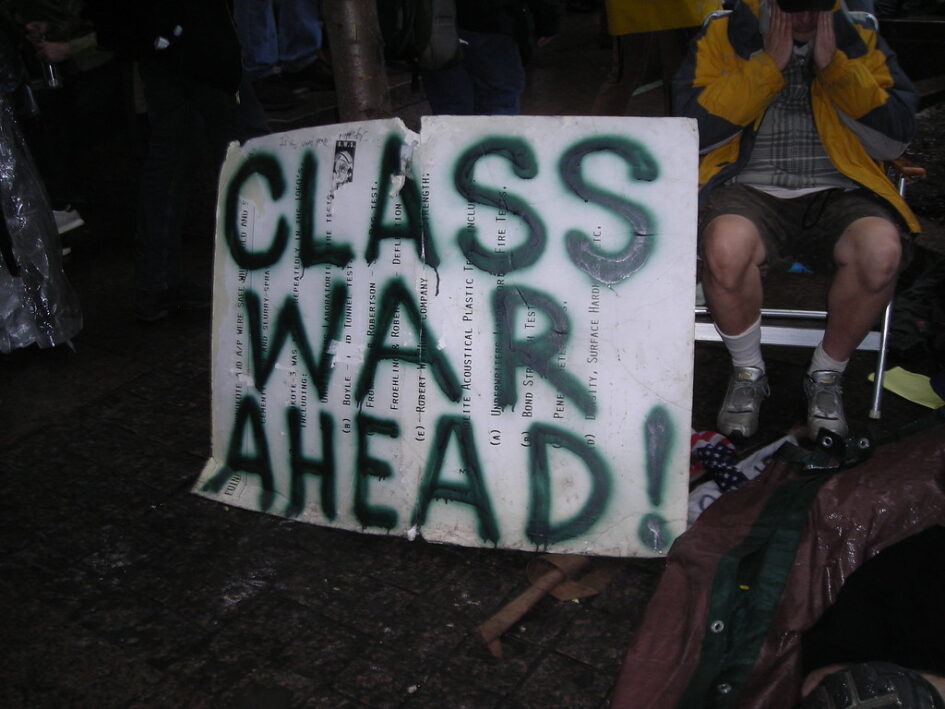 In our recently published article for Critical Sociology, we investigate the significance of the (in)famous pop cultural phenomenon “OK Boomer,” and how it relates to the political, cultural, and economic conditions of capitalist realism.

What are the origins of this phrase? In July 2019, a now-viral video was posted to TikTok, where a young person listened to an older man rant about youth having “peter pan syndrome”—never wanting to grow up and take responsibility for their lives. As the man continues his rant, the TikTok’er scribbles a note in their notebook and holds it up to the screen. It reads: “OK BOOMER.” Several months later, when New Zealand MP Chlöe Swarbrick was interrupted while speaking about climate change, she snapped back at her fellow Parliamentarian with an “OK Boomer.” A few months after that, the world was captivated by a video of a young woman—now colloquially known as “OK Boomer girl”—wearing a Bernie Sanders T-Shirt while dancing and lip-synching to the “Oki Doki Boomer” song. This video now has over 248,000 likes on Twitter, and over 50 million views on TikTok.

For some, “OK Boomer” (henceforth OKb) represented “the end of friendly generational relations.” A line-in-the-sand was drawn, and the OKb meme illustrated a major battle between generations: older Baby Boomers vs. younger Millennials and Generation-Z.  These generational designations, omnipresent in much hand-wringing about a variety of social trends, represent a new pop-academic field which explains many social issues as the outcome of generational habits and preferences, not a materially-based outcome of social relations under capitalism. At its height, OKb even generated a brief discussion on age discrimination among Boomers, with some declaring OKb to be an ageist slur.

Contra the ‘generational warfare’ discussion, we saw Jacobin Magazine editor Bhaskar Sunkara chastising OKb espousing youth, demanding “rich kids [stop] shouting ‘OK Boomer’ at” their elders. He considered this meme symptomatic of “the cultural dominance of upper-middle-class youth” within “online culture,” and concluded by suggesting we remove our ideological blinders and figure out “who [the] enemies are. Here’s a hint: it’s not ‘boomers’ – it’s that investment banker you went to high school with.” If Sunkara was right, some additional question must be posed: Why did a seemingly non-politicized (or, non ‘class conscious’) meme captivate millions? Furthermore, what were the political cultural conditions that birthed this meme, and how does it relate to the reality in which we all—not just those ensconced in niche social media circles—operate? Here, we turn to the theoretical frameworks offered by Mark Fisher, Fredric Jameson, and Slavoj Žižek.

Many readers are familiar with the pro-capitalist mantra that defines the neoliberal era—“There is no alternative [to capitalism]” (TINA). As Jameson presciently commented three decades ago, “it seems to be easier for us today to imagine the thoroughgoing deterioration of the earth and of nature than the breakdown of late capitalism.” As the 20th century concluded, the cultural logic of capitalism was increasingly defined by formalized nostalgia, cultural stagnation, and political malaise. Capital had a growing ability to absorb subversive cultural and artistic production, relegating it to a glossy and commodified package of faux-resistance. Mark Fisher developed this argument further in his book, Capitalist Realism. Per Fisher, while the earlier moments of postmodernity at least had inklings of what a plausible alternative to capitalism may look like, the present is defined by a “deeper, far more pervasive, sense of exhaustion, of cultural and political sterility.”

As Slavoj Žižek stated, politics of the 2000’s have been uneventful because “we lack the very language to articulate our unfreedom.” Furthermore, since postmodernity is dominated by the logic of political cynicism, ‘speaking truth to/about power’ is not nearly as clarifying as one might hope, as disillusionment and distrust cauterizes many from being shocked by governments or governing official’s outwardly crude or criminal activity. In psychoanalytic terms, ideology can take the form of fetishistic disavowal, when  you ‘know very well’ that something is not true, ‘but nevertheless still believe’ in it. Simply put, the ability to “cognitively map” your place within the system of global capitalism, and adequately plan to change it for the better, is muddled within our current political coordinates.

OKb emerged as a symptom of late-capitalist postmodernity among a generation who, for structural reasons, may not ever realize the even modestly comfortable lifestyles of many of their (grand)parents. Rather than confront this structural issue, many engage in “fetishistic disavowal.”  In this cognitive process, Gen-Zers simultaneously understand that ‘Boomers’ (as a static demographic) were not wholly responsible for the conditions under which this generation is emerging into early adulthood. However, few, if any, alternatives exist to counter the malaise of capitalist realism. Instead, OKb acts as a stand-in for this resentment, anger, and disappointment. Gen-Z may know what’s wrong, and who is to blame, but lacking any viable outlet, they prefer to cynically “OK Boomer” a generation who still believes that following the hegemonic value system of hard work, frugality, and self-denial will allow a person a middle-class level of consumption.  This fetish works against the real task of defeating neoliberal capitalism, something no political formation in the US is actually doing on a large scale.

Will OKb become cultural cannon fodder under postmodern capitalism? Perhaps. As Fisher remarked, “culture can assist in widening the political bandwidth as much as it’s simply an expression of the underlying political situation.” Fox Media was reportedly interested in trademarking the phrase and making a television show based on the idea of generational warfare. Alternatively, when hundreds of “OK Boomer” chanting protestors stormed the field of a Yale-Harvard football game in November 2019, they were also demanding debt forgiveness for Puerto Rico and divestment from fossil fuels. With many youth now participating in massive movements for environmental and racial justice, perhaps we’re witnessing an increased awareness of the sharp vicissitudes of the capitalist system.

Jason C. Mueller is a Lecturer and Research Affiliate in the Department of Sociology at the University of California, Irvine. His ongoing research covers various topics including global political economy, post-colonial development, and the emergence of movements for racial, environmental, and Indigenous Justice. You can find his publications in Critical Sociology, Progress in Development Studies, Peace Review, and other interdisciplinary outlets. You can contact Jason at: [email protected].

John McCollum is a dual-appointed professor in Sociology and Political Science at Minot State University, North Dakota. Broadly, his work examines class, environment, and globalization. His current research examines the possibilities of booms in commodity prices and extractive industries to open opportunities for organized labor to make gains recruitment and bargaining demands. This research looks at the established unions in North Dakota’s Bakken Oil Shale region to examine how the late 2000s oil boom altered their organizations. Lastly, he is interested in theory and the social imaginary, including youth movements and the Green New Deal. You can contact John at: [email protected].