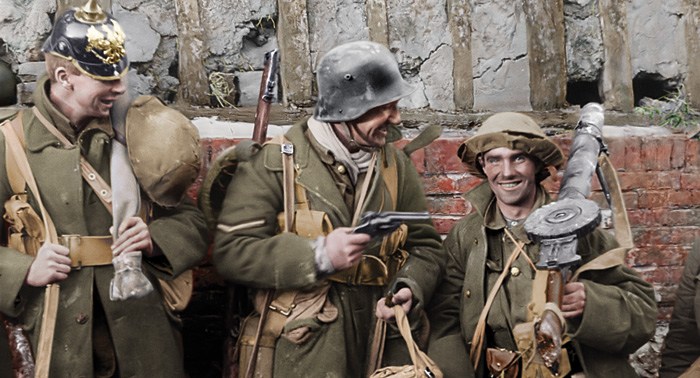 Falling short of its supposed purpose of honoring peace and abhorring war, They Shall Not Grow Old confuses audiences with a face-value acceptance of the most generic recountings of british soldiers ultimately in favor of the war. The film itself should be regarded as squalid propaganda, and while a bit more self-aware than the likes of Dunkirk or Darkest Hour, one could be forgiven for thinking it was intended to mark the war’s beginning rather than its end. Truly, in this documentary optimism for the war is not fleeting, only marred, and even in that regard the director, Peter Jackson, made critical decisions to downplay its horror.

Confusingly, in the in-theater version, Jackson speaks 1-on-1 with the viewers, stating the intention of the film to be a remembrance of the armistice, of the trials of war and ultimately of peace. However, the exclusive 2-day showing of the film comes complete with a short, much less ambiguous propaganda reel from the WWI Centennial Committee for viewers in the united $tates. Their plug very explicitly frames the war as one fought for preservation of democracy against the autocratic german imperialists, and one where amerikan involvement was the determining factor in its conclusion. They even characterize the u.$. involvement as a “multi-racial” commitment, an insult, given that slavery was still in living memory, the army was segregated, and the indian wars of extermination were still ongoing. It should come as no surprise that their stake in the film’s u.$. debut is funding for their own jingo imperialist project to erect a new monument to the victory of amerikan imperialism in the first world war.

Though when the actual film starts, the audience is not given any reprieve from this attitude, even if it is ever-so-slightly diluted. The film begins with british veterans recalling their feelings of the war in general, and its beginning. The consensus was clear: they never had any doubt that britain would win the war, and they do not regret their participation in the least. Perhaps having been made such celebrities after having survived so long dulled the ubiquitous feelings about the war that have seemingly died out with its living memory. The film itself mirrors these initial impressions. Never is there any mention of the Christmas armistice, or of anti-war or defeatist sentiment, nor of the strikes and political interruptions that nearly cost france, britain, or germany the war, or the great humiliations at the Somme or Gallipoli.

Clearly, even through troubling scenes recalling the war’s carnage, a feeling of invincibility and determination defines the film’s message. One has to wonder what interests played into the making of this film, as Jackson stated clearly that the british imperial war museum, the institution that commissioned the film, made no demands other than it use their footage. Jackson ostensibly had complete creative control, and yet the new zealander refuses to depict Gallipoli in any way. Certainly it would have spoiled the optimism of the film had it recalled the terrific defeat of the british imperialists by the Ottomans, other than that there is no other discernible reason it was cut.

The film’s treatment of the “enemy” is little better. They have casual talk of the humanity of german prisoners, but generally have little good to say about them, including a mention of the “terrible Prussians” who were ubiquitously hated, even by their fellow germans. The veterans in the film go so far as to surmise that among the germans and english there existed a feeling that they’d rather be fighting together against the russians and the french, rather than against each other. The injection of humanity for the “enemy” is both strategic and insidious, and normally involves some alternative imperialist message, rather than any anti-war sentiment. Even at war’s end, the message is of despair in the feeling of uselessness and a dull future, hardly related to the horrors of war, and more akin to “stabbed in the back” sloganeering than a confusion as to the war’s purpose.

Ultimately, the film can be correctly understood as the last nail in the coffin for sober recollection. It’s hardly for lack of sources that such a narrow picture has been painted, as such a feeling for the war is a rather new phenomenon outside of outright reactionary political circles. Instead, it was a deliberate attempt to provide some cover for renewed militarism and imperialist nationalism. The film will likely be remembered as the first propaganda film of the next war, one of those transitional curiosities that belies the zeitgeist, but without question it is propaganda for the first one. If one were to watch only this film on the first world war, they would come away with the idea that there was never any question of british victory, that the war was fought courageously and had clear, patriotic objectives. Without any alternative viewpoints, and the number of those are rapidly shrinking, viewers’ understanding of the war would contradict even basic investigation into its causes and course.

Unfortunately for us, that is precisely what the imperialists want. Right now, on the precipice of new wars of redivision, films like this are an invaluable asset to the imperialists in their drive for renewed annexation. The only positive element which can be taken from this film is the ingenious restoration and editing techniques that have been squandered on such an insidious project.

For all communists and anti-imperialists, the film is a travesty to the real memory of the first world war as an imperialist slaughter that led countless people to their deaths, captained by the worst militarists and celebrity butchers, and catered to by the worst cowards and opportunists in the yellow “left”. We must rise to meet this disgusting obscurantism and pro-imperialist sloganeering, to thwart the systematic attempt to conceal the causes and nature of war in order to justify current and future wars.