‘They Want Us Dead’: Another year of devastating overdoses in Baltimore 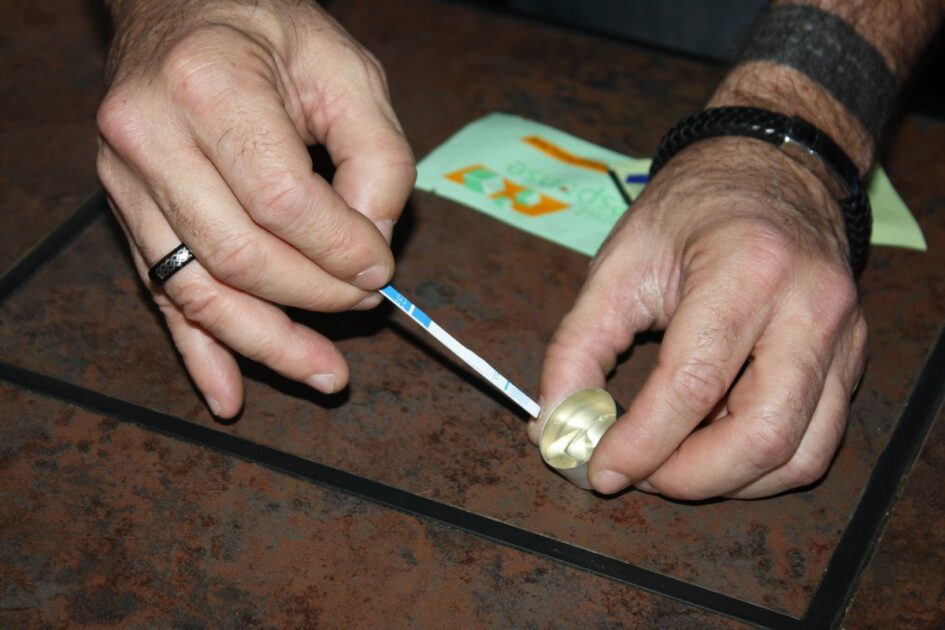 Last year, I hid behind an abandoned building in East Baltimore with three guys who all used heroin together as they tested their drugs, injected them, and made sure they were there for each other in case any of them overdosed.

It was about 8AM in the middle of January 2020, sunny but cold, and “D”—Black, in his late thirties, without a home, and requesting anonymity for obvious reasons—held court behind a vacant rowhouse. D saw to it that he and his friends were as safe as possible—he’s more fastidious and more experienced than the others. Heroin had been part of his life for about 20 years.

Most mornings back then, D and his friends looked out for one another because they understood that they were most likely to overdose when they used alone. If no one’s there with you, no one’s there to save you.

In case anybody did overdose, D was ready with Naloxone, the medicine that blocks the effects of opioids and reverses overdose. He gripped the small nasal spray bottles of NARCAN and got a little less jokey with me.

Overdoses have been increasing for years now because the drug supply has been poisoned with fentanyl, a synthetic opioid that has leaked into street drugs, making them unpredictable and lethal. You just don’t know what you’re getting. For the most part, the response to this lethal phenomenon has amounted to the all-too-typical declaration of an “opioid crisis,” which has catalyzed a combination of moral panic and a severely limited plea for “understanding” that mostly focuses on addiction and treatment.

For D, who does not want to stop using heroin, just about any kind of large-scale service aimed at people who use drugs is pretty much useless as far as he’s concerned. He doesn’t think of himself as an “addict,” and I’m not going to either.

What D needs is a safe place to use drugs and to be treated with dignity and respect. Until that day comes, he’ll be here, holed-up behind a bent and crumbling building propped up by some two-by-fours, trying to keep himself and others alive.

“I’m a lifeguard,” D said. “We’re all like lifeguards for each other.”

You know it’s fentanyl because there’s no waiting for it to hit you.

The threat of overdose feels omnipresent now. D does his best to be safe and shoot smart, even though he knows that may not necessarily be enough.

The first question D asks when he gets a hold of some heroin is: “Is it good?” The next question is: “How good is it?” Then he wonders, “Is it safe?” He has some sense of how safe it is because he tested it. With cookers and strips given out by organizations such as the Baltimore Harm Reduction Coalition, he tests his drugs. He mixes heroin with clean—or clean-ish—water, puts it in the cooker, and mixes some more. Then he dips the end of the testing strip into the heroin and water mix and waits about 30 seconds. If the strip shows a single line, there’s fentanyl in it. If there are two lines, there isn’t any fentanyl.

Simply knowing fentanyl’s in there actually calms the nerves a little. “I know more how much to worry,” D said.

There are often murmurs of “bad batches” circulating. D hears the stories, or sees it for himself, and tries to connect the dots. Three people whom he’d seen the day before all found dead in an abandoned building.

Some guy told D about how he snorted, slipped out of the alley afterwards, and immediately dropped to the ground. You know it’s bad when the snorters are dropping.

Soon, there will only be bad batches.

What D got that day—the day I was with him and the others in East Baltimore—was alright, it seemed. His one buddy just wrapped up. The other was deep in a nod. The good kind, though.

Now it was D’s turn. He sat down against the vacant, and pulled up the sleeves of his oversized hoodie and stretched out, NARCAN sitting next to him.

“Hey, it’s y’all’s turn to watch me,” he reminded his friends, both heavy-lidded and relaxed.

No one overdosed behind that vacant on that day in January 2020.

What D was doing behind the vacant building that day was essentially running an overdose prevention site. If he or one of his friends had overdosed, another one of them would have been right there to provide Naloxone and call 9-1-1. There’s a Good Samaritan’s Law in Baltimore that “protects” people who use drugs from being prosecuted if they call in an overdose and are present when cops and paramedics arrive, but it often doesn’t work that way. If the cops show up and see they can save a life and bust the friend of the person whose life they saved for possession, or paraphernalia, or intent to distribute (turning them into a far less sympathetic “drug dealer”), then all the better.

“Police screw everything up,” D said.

The cops typically hear about a place like the one where D’s standing because some NIMBY calls the cops, or because the cops will corner some desperate person who uses or sells (often, both) and is presented with the “choice” between prison or giving some information about someone else doing or selling drugs. More often than not, someone will give in to the pressure, naming a few guys a lot like themselves, like D. And whoever isn’t locked up is sent scrambling for a new place to use drugs, increasing their likelihood of overdose.

“Good decent people can get you in trouble,” D said.

If D didn’t have Naloxone or fentanyl test strips, he would still use. If he didn’t have clean needles, he’d still do it, too. D and millions of people like him (and I, for that matter) are going to do drugs. You can’t stop us. And no matter how many bricks of dope the cops seize and the reporters photograph, drugs aren’t going anywhere. The solution is to make drugs safer and easier to do, because it’s not the drugs themselves tearing communities apart; it is the drug laws that keep people hiding and desperate and that keep the drugs unregulated, unsafe, and, these days, especially deadly.

“Legalize heroin,” D said, yelling it like a protester, mocking advocates and advocating at the same time. “Free the heroin!”

The same month I met up with D, then-City Council President (now Mayor) Brandon Scott introduced a resolution that called for an informational hearing about “overdose prevention sites”—places where people can use drugs safely without having to worry about arrest. There are more than 100 of these sites around the world and no one has ever fatally overdosed at one of them. Currently, there are very few in the United States. Rhode Island intends to launch a pilot site and New York City opened two sites in Manhattan this week.

“If the state or the law department or someone else doesn’t think the council has the authority to authorize [overdose prevention sites], then we’ll have the discussion,” Scott told me at the time. “Saving the lives of Baltimoreans is worth the risk of making some other government body mad or running the risk of having to defend why we want to save lives.”

In the meantime, Mosby announced her office would no longer prosecute Baltimoreans for drug possession. The results are notable. In 2019, there were 3,770 arrests for drug offenses, according to the Baltimore Police. In 2020, there were 1,348 arrests. What was originally introduced as a temporary policy during the start of the pandemic has continued.

Earlier this year, a bill to decriminalize drug paraphernalia passed the state legislature. It was the only bill passed in 2021 that significantly addressed the overdose crisis.

“We need to decriminalize possession of these life-saving supplies,” Rajani Gudlavalleti of Baltimore Harm Reduction Coalition said. “[The bill] will reduce risk of overdose, transmission of HIV and Hep C.”

The drug paraphernalia decriminalization bill, however, was vetoed by Gov. Larry Hogan, who claimed in his veto letter that it would “encourage” drug use, which is simply and demonstrably untrue. In 2017, Hogan also called overdose prevention sites “insane.”

This month, there is a special legislative session in Annapolis, and the Baltimore Harm Reduction Coalition and others are calling for the state legislature to overturn Hogan’s veto.

In June 2021, I ran into D again. I hadn’t seen him since that day behind the vacant. He hadn’t seen his two friends in months. He worried they were dead—of overdose or COVID-19.

“Thought you were dead,” I said to him, joking.

D was thinner 18 months later. His hair was longer. He had a lot to say. During COVID-19, D was encouraged to social distance but he literally had nowhere to go. He’s homeless. Even the rare public places someone like D could sneak into and wash up or fill a water bottle—such as a coffee shop bathroom—were now closed, and if they were open and forcing their workers to serve lattes during a plague, the bathrooms were locked. If D had decided to go to a shelter, he would’ve been surrounded by people who could possibly infect him—or he, them. He also wouldn’t be allowed to use drugs in the shelter.

2020 claimed nearly 100,000 lives lost to overdose on top of the 375,000 people who would die due to COVID-19. Hundreds of millions would know what it’s like to be neglected and considered expendable—which is how D and so many other people who use drugs have felt for decades. This was a crisis within a crisis for those who use drugs.

“If you told me last year that the government would treat everybody the way they treat junkies like me, I wouldn’t have believed it,” he said. “They want us all dead. To them, we’re better off dead.”

Baltimore: Unemployment is a Nightmare! Protest at Dept. of…