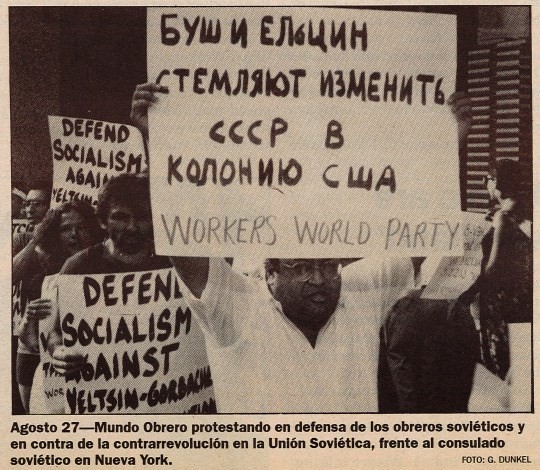 Thirty years ago, Workers World Party led by Sam Marcy mobilized in defense of socialism following the failed attempt of the Soviet Emergency Committee to oust the pro-capitalist leadership of the USSR on August 19-21, 1991. Today the Socialist Unity Party and Struggle – La Lucha for Socialism newspaper work to continue the revolutionary traditions of Marcy and the WWP of that period.

We held emergency demonstrations in New York and San Francisco to protest the reinstatement of Yeltsin and Gorbachev and the subsequent suppression of the Communist Party of the Soviet Union and Pravda.

WWP was the only communist group in the U.S. to take to the streets in defense of socialism and against the Bush-Yeltsin-Gorbachev counter-revolution.

Then, on September 28, 1991, we held an Emergency Conference “In Defense of Socialism” in New York City. This national gathering brought together communists and supporters from across the country for discussion and orientation on the crisis in the USSR following the restoration of the counter-revolutionaries Yeltsin and Gorbachev with imperialist help. A large street demonstration was held in midtown Manhattan.