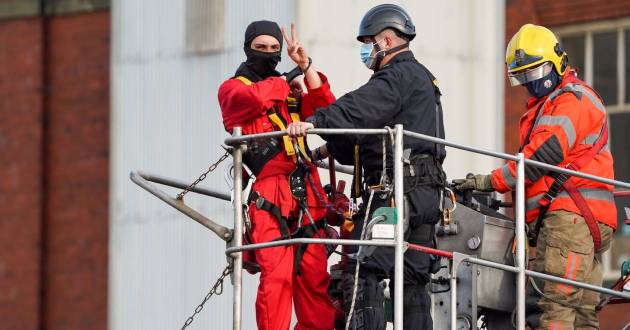 Bethany Rielly speaks to the campaigners who risked jail time to drive weapons manufacturer, Elbit Systems, out of their town.

Outside a red-brick factory in Oldham, a large town near Manchester in the north of England, a diverse crowd of people embrace, clap, cheer and shed tears of joy. Together they’ve achieved what many would consider an impossible feat: taking on a multi-billion weapons company – and winning.

‘People were in a state of disbelief that we did it, us, this motley crew of people did it,’ exclaims Adie Mormech, a long-time Palestinian rights activist who has been a central figure in the campaign to kick Elbit Systems – Israel’s largest private arms firm – out of the town. Last Monday, that campaign ended in victory when the Israeli firm announced it was selling its subsidiary Ferranti Technologies Power and Control, based in Oldham’s Cairo House, a former cotton mill, for a sum of £9 million – £6 million less than it bought it for in 2007.

Though the sale was announced by Elbit as part of a ‘company restructure’, Mormech is in no doubt that it was their five-year campaign that forced the firm out of Oldham. ‘It’s an incredible example of what a lot of ordinary people coming together, showing strength and commitment, can do over a long period,’ he tells me. The sale is the first major victory against Elbit’s operations in the UK. As a major supplier of armed drones to the Israeli military, Elbit has long been a primary target of the pro-Palestine movement. Its drones, according to US monitoring outlet Investigate AFSC, have been used extensively in Israel’s attacks on the besieged population of Gaza both in 2014 and in 2021. While concrete data is not yet available on the 2021 attacks, Elbit drones were used in 2014 to conduct ‘over 6,000 airstrikes in Gaza’ – and described as a ‘testing ground’ for Elbit’s Hermes 900 drone, which was being developed at the time – killing 2,251 Palestinians, of whom 1,462 were civilians and 551 were children’. Neither Elbit’s British or Israeli offices responded to New Internationalist’s request for comment.

Horrified by Elbit’s presence on their doorstep, Mormech, from nearby Manchester, and a small group of local activists began campaigning against the factory in 2016. Over the next three years, they filed petitions, held local stalls, met with councillors, and set up the Oldham Peace and Justice group, with the aim of growing local support. Weekly rallies have been held at the factory gates since May 2021 – triggered by anger at Israel’s onslaught on Gaza that month, in which 254 Palestinians were killed, including 66 children. Support from Oldham’s South Asian population has helped this movement grow. Navaid Afzal, who set up the local United4Palestine campaign group following the May attack, says: ‘As a Muslim, Palestine is a dear place, so anything that affects Palestine affects us. Knowing this factory was killing our brothers and sisters in Palestine, we felt a duty to do something.’

But Mormech notes that it was the recent escalation in campaign tactics that was the ‘vital turning of the screw for our victory in Oldham’. In August 2020, Palestine Action burst onto the scene with the aim of shutting down Elbit’s 10 UK sites. Since then activists from the group have repeatedly occupied the Oldham factory, bringing arms production to a halt. Activists have even broken into the site, destroying machinery and spraying the walls with red paint. Huda Ammori, a co-founder of Palestine Action, claims the group has cost Elbit millions of pounds worth of damage.

This relentless and disruptive action was a crucial element that made it ‘unfeasible’ for Elbit to stay in Oldham, she tells me. For Ammori, who faces prison if found guilty of the charges relating to her activism against Elbit, the firm’s exit ‘validates the ups and downs of taking direct action’. She adds: ‘It shows we actually can shut down these factories for good – I think this is the start of the end for Elbit.’

He was killed by an Israeli airstrike at the age of 17. Such loss cannot be healed, especially when there’s no accountability

The news has travelled far beyond Oldham. Shahd Abusalama, who grew up in Jabalia Refugee Camp, northern Gaza, tells me the events have been celebrated in Palestine. Speaking over Zoom from her home in Sheffield, where she has lived since leaving Gaza in 2013, Abusalama shows me a picture of her cousin, smiling on a beach. ‘He is no longer here,’ she says, explaining that he was killed by an Israeli airstrike at the age of 17. ‘Such loss cannot be healed, especially when there’s no accountability.’

In the face of the international community’s failure to hold Israel accountable for its crimes, Abusalama, who has supported the campaign, says the Oldham victory represents a ‘symbolic form of justice’ for Palestinians and a cause for hope.

Elbit’s exit from Oldham will, however, lead to a loss of skilled jobs in a town badly hit by unemployment and deindustrialization. Job losses are a particularly sore subject in the town; once known as the cotton-spinning capital of the world, Oldham was hit hard by the post-industrialization of the 1960s and 70s. To this day the town remains one of Britain’s most deprived, and the far-right has used poverty and unemployment to stoke divisions between Oldham’s white and South Asian populations. The need to preserve the few skilled jobs in the area has often been cited as an argument against the campaign. Cairo House, built in 1903 as Cairo Mill, embodies this history and the community’s decades-long struggle for work.

Jacqui Burke, another committee member of Oldham Peace and Justice, has always strived to make this issue central to the campaign. In her lobbying of the council, Burke has made the case for the transition of production at the factory from arms to environmental and renewable manufacturing. ‘Green sectors could actually employ far more high-skilled workers, because it’s well-known that the arms industry doesn’t actually employ many people,’ she tells me.

Although it remains to be seen what the future of the factory will hold, there is still hope that Cairo House will remain a source of work for Oldham, while finally leaving its dark past behind.