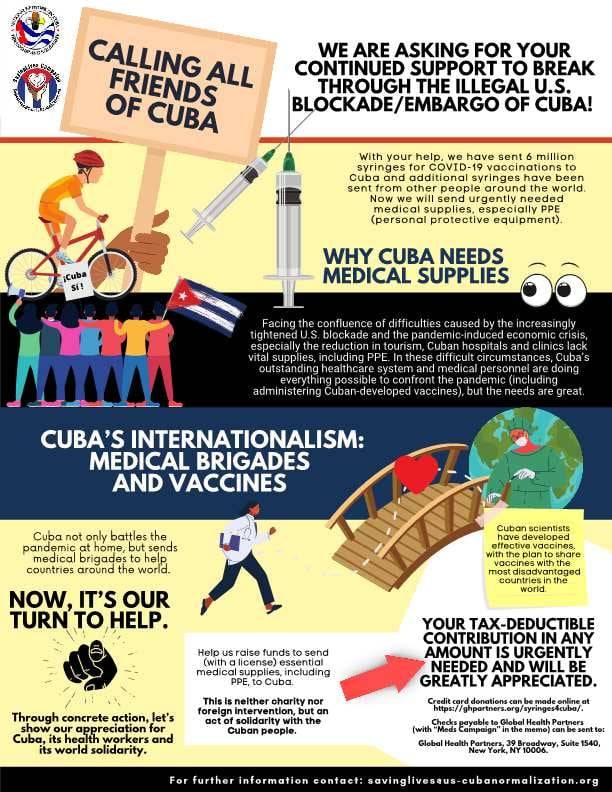 This is a very important time to stand with Cuba as it faces the double challenge of a tightened US blockade and the ravages of the delta variant of COVID 19.

The Cuba solidarity movement in the United States and worldwide responded to Cuba’s appeal for syringes with a powerful statement. By the end of the month close to 20 million syringes will have been sent to the island, including six million from the U.S. These donations will help Cuba achieve its goal of fully vaccinating its population in the coming months raising hopes for its economic recovery.

However, in the short term, Cuba’s needs in the medical arena are severe as there are shortages of many things, including personal protective equipment (PPE). Many governments with good relations with Cuba, including Russia, China, Mexico, Venezuela, and Bolivia are stepping up with much-needed shipments. In this context there remains a role for international solidarity that we evidenced in the syringe campaign. Our immediate focus in the U.S. is to send a container of PPE within the next month. To do that we need to raise tens of thousands of dollars in the coming period.

We ask you to join this campaign with a generous donation. Like with the syringe campaign, the secure donation is through Global Health Partners and every dollar goes directly to the campaign.

Via National Network On Cuba