“This made us realize our strength”: Bakery workers’ 4-month strike ends in victory 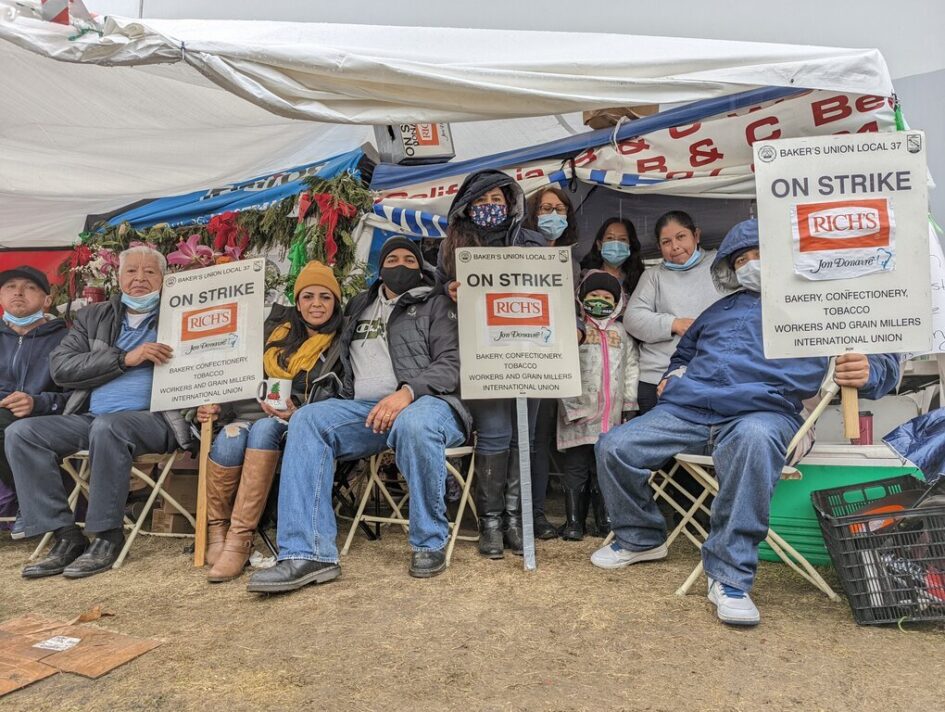 Members of Bakery, Confectionery, Tobacco Workers and Grain Millers Local 37 have voted to ratify the proposed tentative agreement, bringing their nearly four-month long strike at the John Donaire Desserts plant to a close with a victory. The union members secured a four-year contract that includes a significant wage increase, maintains affordable health insurance, and improves working conditions. The wage increase will help the bakery workers contend with the high cost of living in Los Angeles County. And unlike the previously proposed contract, it does not include much more expensive health insurance that would offset a wage increase. According to Elvia, who has worked at the plant for over a decade, the new contract has lifted the spirits of the workers and the wage increase will help them cover the cost of rent and other bills.

Alongside the demand for a wage increase and for affordable health coverage was the demand to be treated with respect. Elvia shared, “This has been addressed too. They have a new woman in HR who seems more patient and professional so far. Hopefully she can build a better relationship between management and the employees.” Other members of the management were transferred shortly after the strike ended, proving the power of the workers’ collective action.

The workers held a 24/7 picket line since the strike at the Rich Products-owned bakery began on Nov. 3 of last year. After the union rejected the contract proposed on Dec. 17, Rich Products enacted a 50 cent wage increase for the new hires and remaining workers on the job. The plant also offered workers who crossed picket lines back pay and a gain sharing bonus. These workers were not forced to work 10-12 hour shifts like before.

Workers who did not go out on strike to begin with did so for a variety of reasons. Some simply underestimated the power of collective bargaining, some were lured by the corporations concessions, while some of the undocumented workers feared legal retaliation. Elvia recalled the experiences, “There was a point when people would say ‘Look I really wanted to stay with you guys, but I can’t watch my family keep struggling for our basic needs. I put everything that I had into this already, even my savings, I cannot resist anymore.”

The union had the impression that the plant’s strategy was to win over the remaining workers with a more dignified workplace in order to vote out the union in the future. The remaining strikers contemplated ending the strike, but because of the support they continued to receive from their community, they decided to finish strong together. It eventually became clear that the bakery could not secure a majority to throw out the Baker’s Union in the foreseeable future.

During this time, the union remained hard at work organizing rallies, a boycott, and holding the picket line. Their perseverance foiled Rich’s efforts to undermine the demands of the strike. The support they received from all over contributed greatly to their success. They received many generous donations, and had many volunteers join the picket line. NFLPA, SEIU, SMART and IATSE’s TAG were among some of the labor organizations that visited and supported the strike.

The PSL Los Angeles branch joined the picket line on many different days, attended the rallies in February, held screenings of “Salt of the Earth” and “Made in LA”, and created a video about the Jon Donnaire worker’s strike.

With the all-around support that the bakery workers were receiving, even a number of elected officials of the LA County Board of Supervisors and the California legislature felt the need to show support for the union.

The success of this strike has been transformative for the bakery workers. Not only are they moving forward with a better economic footing, but they have forced Rich Products to begin to address and improve undignified working conditions. Although this new contract is a big victory, the union members anticipate continued struggle in the future and are in a better place now to continue fighting. Elvia reflected, “None of us are scared anymore. If there’s another situation where we have to go on strike, we’ll all be there. This made us realize our strength. You can’t imagine the solidarity that grew out of this, even in people who were timid. We are very proud.”

LA County bakery workers: ‘We fight for ourselves, our children’

Metalworkers’ strike in Cadiz: our strength is to fight as a class