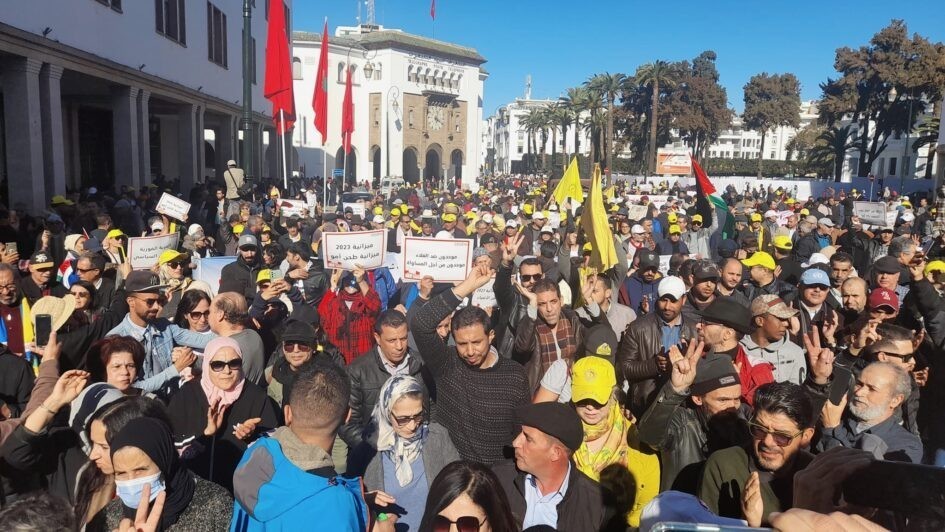 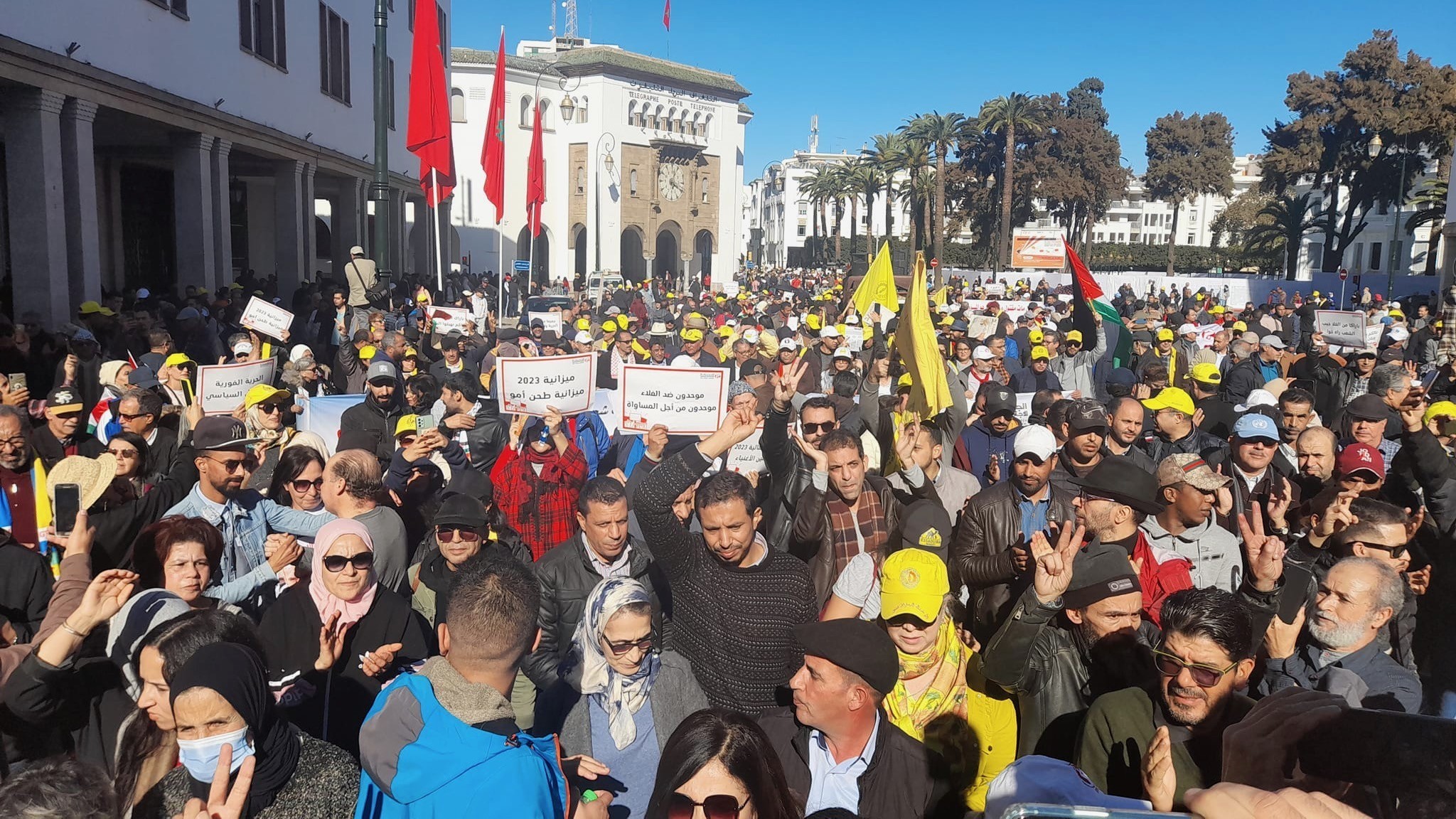 Thousands marched on December 4 in Rabat against soaring prices of basic goods including food and fuel. The protest also drew attention to the attacks on freedom of expression, public services, and labor rights.

Thousands of people gathered at the Bab Al-Ahad Square in Moroccan capital Rabat on Sunday, December 4, as part of a national march against “high prices, political repression, and social oppression.” The action was organized by the Moroccan Social Front (FSM), a coalition of left-wing political parties and trade unions, with support from leading human rights groups as well as various political, civil society, and sectoral organizations and unions.

“We came to protest a government that embodies the marriage between money and power and supports monopoly capitalism,” declared Younes Ferachine, a coordinator at FSM. As the march proceeded through the capital, protestors chanted,“The people want lower prices… The people want to eliminate despotism and corruption.”

Activists from different parts of the country and all those impacted by issues like housing and unfair policies across sectors of society participated in the march. Protestors also raised demands around issues of unemployment and access to public services like hospitals and schools.

In a statement to Peoples Dispatch following Sunday’s march, FSM National Secretariat member Mouad Eljohri stated that while the authorities did not intervene in the march, they had refused to receive a notice for the event, in violation of the law. Authorities in the city of Kenitra and in Rabat’s Diour Jamaa and Quartier de L’Ocean neighborhoods tried to prevent activists from printing posters and placards and distributing information about the march. Despite these maneuvers by the state, Eljohri still classifies the action as “a great success” and that the mobilization was one moment “that will be followed by other stages of struggle”. He called on the different sections of the FSM to build on this success and “to take the necessary local initiatives to meet the demands of the people.”

FSM has been mobilizing amid declining socio-economic conditions in Morocco with millions of people living in poverty and vulnerability and rising prices of basic necessities including fuel. The country’s consumer price index saw an 8.1% year-on-year increase in October. The surge was driven by high food prices, which saw an increase of 13.8%. Transport costs have also remained high with an average inflation of 12% over the first 10 months of 2022.

As the situation in the country has worsened along these indices, progressive forces have highlighted the policies being pursued by the government and their impact on the working class.

“These dangerous conditions experienced by the Moroccan people are the result of the domination and savagery of the Makhzen [the country’s governing system centered around the monarchy] capitalist system which is based on dependence and imperialism, the intensive exploitation of the working class, and the plundering of the various toiling popular groups by the ruling class bloc,” denounced the Workers Democratic Way (WDW) party.

The party also condemned the government’s “reactionary measures, procedures, and policies aimed at enriching the wealthy and impoverishing the poor,” especially the government’s Finance Bill which would give “tax gifts to large companies in exchange for fiscal pressure on small and medium enterprises and owners.”

Joining the protest call, the National Association of Lawyers in Morocco added that the bill would deepen the suffering of the Moroccan people. It also criticized the marginalization of public services, especially education and health, and the targeting of several groups including lawyers.

“Morocco is not a poor country, but rather has a variety of resources, including marine, fishery, and mineral resources, or even phosphate, which is enormous wealth for Moroccans,” a protestor told Moroccan news outlet Hespress. “The alternative is to build a democratic state that distributes wealth fairly to the people.”

Tayeb Modad, a member of the Moroccan Association of Human Rights (AMDH), stated that the national march was organized in the context of “the real crisis” that the country was going through with attacks on the “rights and freedoms and daily subsistence of citizens.”

In addition to the economic demands, protestors also spoke out against “all forms of repression including political and anti-union repression, attacks on the freedom of expression, and the imprisonment of journalists, activists and critics of the government.”

The Palestinian flag was on prominent display during Sunday’s protest. Activists have repeatedly rejected the kingdom’s normalization of ties with Israel.

In a statement, the National Federation of the Agricultural Sector and the Moroccan Labor Union (UMT) also raised key demands including a revision of the government’s Finance Bill, measures to control rising prices of basic goods, an increase in wages along with development of agriculture and betterment of the condition of workers in the sector, an alternative democratic agricultural policy, and food sovereignty.

The National Network for Labor Rights denounced that labor rights which are at the “heart of social rights” are facing a “sweeping capitalist attack led by international financial institutions,” with the support of the government and state institutions.

It noted the deterioration of working conditions in the country, especially in terms of health and safety, with an increase in work-related accidents. It also denounced the escalation in repression of trade unions by employers, a “practical ban” on trade union work in industrial and agricultural sectors and “free zones,” and the criminalization of the right to strike.

Left-wing forces in Morocco have been demanding the protection of rights including the freedom of expression, association, peaceful assembly, and union action. Organizations including FSM and the National Network for Labor Rights have also condemned the lack of true social dialogue in the country and the government’s disregard towards the popular demands of the working class and the unemployed.

Eligible for release in 2016, Mutulu Shakur remains behind bars with worsening cancer

The worsening crises of Nigerian capitalism and prospect for class struggle

Morocco: movement of students and unemployed youth is a harbinger of revolutionary struggles

Thousands of Minneapolis and St. Paul teachers march in lead-up to strike