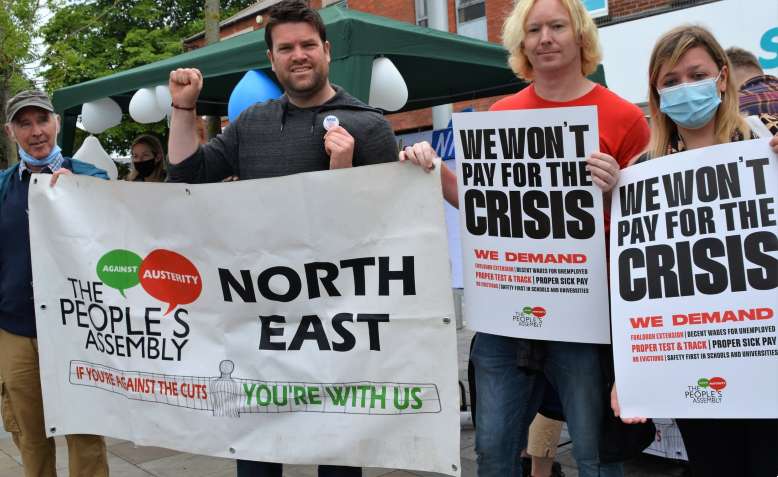 On 3 October, the Tories will once again be blotting the Manchester landscape with their conference. This is a massive opportunity for the labour movement to take to the streets with the People’s Assembly, build a fighting opposition to this government and demand a new normal for working class people everywhere.

As a teacher who has endured the government’s disastrous handling of the pandemic – only to be slapped in the face with a 0% pay rise – I will be part of that demonstration.

Since then, they have bungled their way from crisis to U-turn and back to crisis again. But along the way, education workers and the National Education Union have demonstrated an incredible capacity to resist and provide a lead to others. We were instrumental in averting disaster at the start of this year when our mass online meeting, attended and viewed by hundreds of thousands, forced the government to backtrack on reopening schools at a time when the case number and death rate were at unbearable levels.

Many colleagues have said that the last year and a half has been by far the most difficult they have experienced in the profession. With the often unbearable levels of workload, stress and high-stakes monitoring we already experience, compounded by ten years of Tory austerity, this is a very high bar indeed.

Tory cruelty has been felt in pretty much every area of education. The class inequality of the testing system was left exposed last summer when Gavin Williams’ cruel grading algorithm downgraded thousands of A-level students, disproportionately from poorer backgrounds. Once again, it took widespread resistance from education workers and students, to force them to backtrack.

And what is our reward for our invaluable contribution to managing the pandemic? A pay rise of exactly zero percent. This compounds ten years of below-inflation pay rises for education workers which has seen our income decline considerably in real terms, which will only serve to exacerbate problems with teacher recruitment and retention.

There is little else which could demonstrate so clearly the contempt in which we are held by this government, especially after battling so hard to ensure pupil welfare and safety throughout the pandemic – often under the weight of a mess the government itself has created.

So I will be demanding that education workers, along with all public sector workers, get the pay rise they deserve.

I will also be demanding an end to child poverty. We know how much of an impact this can have on a child’s education and opportunities later in life. There is absolutely no excuse that in one of the richest countries in the world over 4 million children are forced to endure poverty. It took a popular campaign around school meals, led by footballer Marcus Rashford, just to ensure that children who weren’t in school could get enough to eat.

A new normal for education must mean that every child’s welfare is protected, and that the appalling levels of inequality which the Tories have presided over and deepened are reversed. It also means protection of pay for all workers, and for a properly funded education system which places the welfare of children front and centre.

Finally, 3 October is about generating the kind of fighting opposition the wider labour movement needs. Keir Starmer has left barely anything to be desired in this regard, with a ‘loyal opposition’ which has amounted to barely any opposition at all. Time and again it has fallen to the wider movements to build the opposition to this disastrous government which he has proven to be incapable of.

Manchester will be a vital part of this battle. See you there!