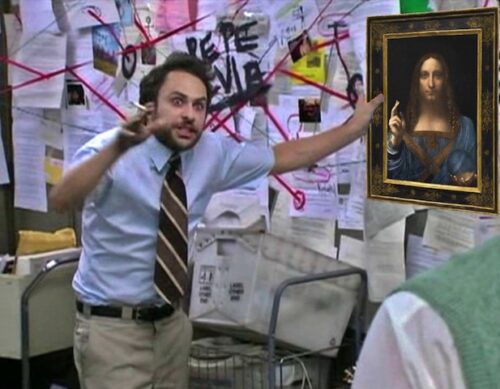 Internet pioneer Jaron Lanier explains social media this way: “People are clustered into paranoia peer groups because then, they can be more easily and predictably swayed.” As a result, extremists have taken over such platforms — and virtually all of the internet. They dominate conversations and overwhelm useful posts that are based on evidence and research. These dangerous groups can be grouped into the following six belief patterns:

All across the Home of the Brave™, there are tinfoil hat lunatics who openly believe that pharmaceutical corporations have our best interests at heart. These same folks also actually trust the doctors who regularly accept Big Pharma bribes.

Conspiracy Theory #2: Masks Prevent the Transmission of a Virus

Despite the fact that NO compelling scientific evidence exists to prove it, there are mask fetishists from sea to overfished sea. In fact, these rabid conspiracy theorists will blatantly call out anyone they see without a mask in public.

The 6-foot social distancing lie is based on a single flawed experiment performed by a single German scientist in (wait for it) 1897. This doesn’t stop misguided wackos all across the globe from espousing it as the gospel truth. Crazy, huh? Conspiracy Theory #4: We Have an Accurate Count of Covid-19 Cases & Deaths

In order to have an accurate number, you have to have an accurate way to count. The PCR test is so flawed that even the CDC is abandoning it, but there’s a massive, cult-like conspiracy who still worship the “official” numbers as if they represent anything based on reality. It’s really sad.

Conspiracy Theory #5: The Government is Just Trying to Protect Us

For 245 years and counting, the U.S. government has carved out a well-documented, public record of screwing its citizens. Suddenly, in the midst of a pandemic, legions of gullible Americans have started taking State power at its word.

This one is a legitimate cult. Even those who once marched as “activists” are now bragging about their blind faith in a failed, experimental gene therapy. Pro tip: Don’t even bother trying to talk sense to them. They make QAnon look reasonable.

I’m beginning to wonder if we need to censor anyone who supports any of these six crackpot theories. After all, we can’t have misinformation casually floating around the interwebs, can we? How can we sane folks enjoy democracy if any unhinged kook is allowed to say whatever’s on their mind? Remember, we’re all in this together…

Seven Theories of Politics: The Rehabilitation of a Loaded Vice Word

Latin America: 2021 has been a year of struggle