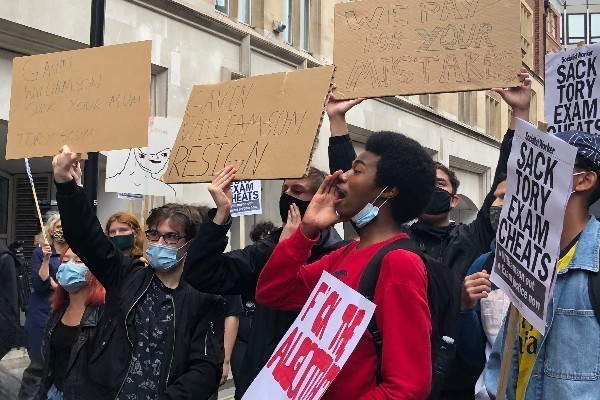 Action is needed because students are doing too well in exams, according to the Tories.

Traditional A-level grades in England face being scrapped under government plans, according to the right wing Telegraph newspaper.

An overhaul of the marking system could see alphabetical A to E grades replaced by numbers.

Nearly half of A-levels—44.8 percent—were given an A or A* this year, based on teacher assessment.

Instead of celebrating success, ministers see this as “grade inflation”. Their reaction underlines that exams are not about assessing people’s abilities but are a way of stratifying students, branding some as “failures” and reproducing class inequality.

Gavin Williamson, the education secretary who presided over the exams scandal last year, is leading the charge. He told BBC Radio 4’s Today programme that his department would be “looking at different measures” to tackle students doing too well.

A senior Department for Education source told the Telegraph that a “big conversation” had already started in government about how fix the rise in grades. “Obviously ministers don’t want it to continue, and that’s exactly why we want to move back to exams,” it said.

“Changing the actual grading system—like when GCSE grading was changed—would take a while to implement. There is debate to be had about that, and we would need a consultation. We are not ruling it out.”

But even under the teacher-assessed system, sharp class divisions remain.

College and sixth form students receiving A grades this year are 50 percent higher in private schools compared with state schools.

Data produced by Ofqual, the exams regulator, also shows that students on free school meals, black students and those living in deprived areas are less likely to achieve A grades than more advantaged pupils.

The pandemic has had a much greater impact on working class students whose parents have suffered job losses and furlough payments. Also Covid-19 outbreaks have impacted overcrowded state schools much more heavily than the smaller private school classes.

Fee-paying schools have seen A and A* grades rise from 44 percent before Covid-19 to 70 percent.

Education charity, The Sutton Trust, discovered that independent schools are likely to use a wider variety of assessments to find the best grades for their students.

It was also recently unearthed that richer parents who send their children to independent schools are over twice as likely to pressure and lobby already stressed teachers to increase their children’s grades. Some 23 percent of private school teachers were pressured compared to just 11 percent of teachers at state schools.

The divide between rich and poor students means working class children are more likely to miss out on their preferred university places.