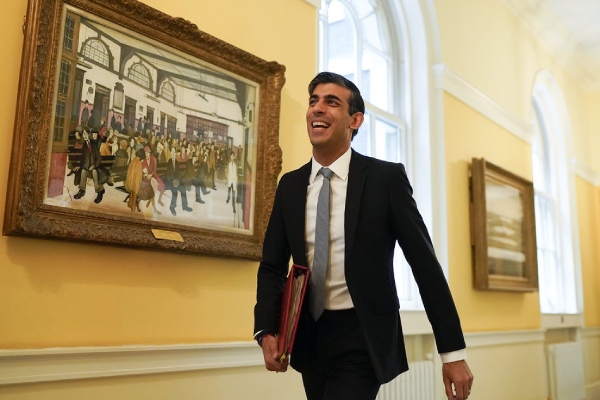 Sunak is delivering for the bosses (Pic: Number 10 on Flickr)

The Tories have handed the richest of the rich an early Christmas gift by rejecting calls to slightly increase the tax they pay.

The Office of Tax Simplification (OTS), a statutory body, published two reports into Capital Gains Tax (CGT) during the last year at the behest of chancellor Rishi Sunak.

It concluded the government should consider putting up the rates a bit and reducing the loot the rich can grab before they have to start paying tax.

But on Tuesday, in a letter to the OTS, the Treasury brushed aside the proposal. “These reforms would involve a number of wider policy trade-offs,” wrote Tory MP Lucy Frazer, financial secretary to the Treasury.

“And so careful thought must be given to the impact that they would have on taxpayers.”

Who are these taxpayers? The OTS says that the main group subject to Capital Gains Tax is “business owners—for example, holding shares in an unquoted trading company”. And “investors —for example, holding a buy-to-let property, a second home or a portfolio of listed shares”.

CGT is paid when these parasites cash in their profits. But even then it’s paid at a much lower rate than taxes ordinary people pay on their wages.

The standard CGT rate is half that for income tax. So the boss making a profit when they sell some of their shares pays a lower rate of tax on that money than workers pay on their wages.

The landlord who profits from selling their clutch of houses pays at a lower rate than the tenants they exploit pays on their income.

Accountancy professor Prem Silkka said the government’s decision not to raise CGT rates is a form of “reverse socialism” where the poor are hit harder than the rich. He also pointed out that, unlike wages, there is no national insurance paid on unearned income.

The “Johnson tax” will come in next year and national insurance contributions will go up for workers. Yet those who rake in their cash from shares, property speculation and rents won’t pay more.

Capital gains tax rates were much higher in the past than they are today. CGT was introduced in its current form in 1965, with gains taxed at 30 percent. Under Margaret Thatcher’s chancellor Nigel Lawson, the top rate moved to 40 percent in 1988.

In 2008 his successor, Alistair Darling, cut CGT rates and brought in “entrepreneurs’ relief” which also slashed tens of billions from CGT bills.

Following this tradition, in 2016 the Tories cut the rates to the present 10 percent for basic rate taxpayers and 20 per cent for higher rate taxpayers. That’s half the figure under Thatcher’s regime.

The Institute for Public Policy Research estimates that equalising CGT with income tax rates and removing exemptions could raise, on average, up to £17 billion a year. But the Tories would prefer the super-rich keep that money, rather than using it for the NHS, schools and pensions.