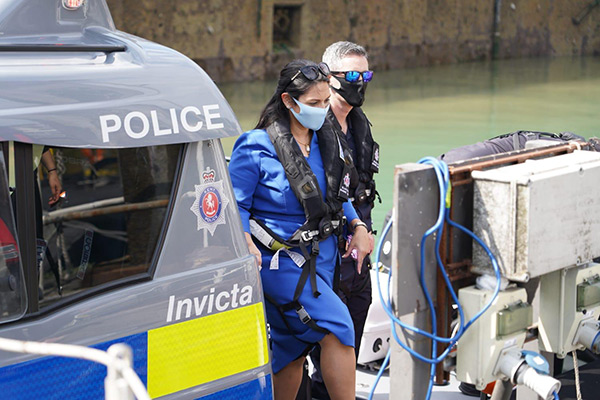 Priti Patel is working for a clampdown on refugees (Pic: @pritipatel )

British border guards could gain the power to stop, board and instantly send back refugee boats in the English Channel.

Tory MPs are demanding that any migrant, including children, should immediately be forced back across the border if they travelled via “illegal” means. Lee Anderson demanded British authorities “drop these illegal immigrants off on a French beach and send the French government a bill for the cost of the journey”.

Home secretary Priti Patel supports the calls for a crackdown. She told MPs on Monday she was ready to withhold the £54 million promised to France to stop refugees from crossing.

In the meeting, Tory MP Craig Mackinlay said the Home Office should remove “diplomatic niceties”. He added it should be showing “that the route does not work” so “migrants would simply not waste their money in trying”.

On Wednesday a Home Office statement said Border Force staff are being trained to employ “turn-around” tactics at sea under plans developed for two years.

France has warned the Tories not to do anything that breaches international law to avoid a “serious loss” of confidence and cooperation. That’s because the French government—which routinely carries out brutal crackdowns on refugee settlements in northern France—doesn’t want refugees to be sent back.

Labour’s shadow home secretary Nick Thomas-Symonds attacked Patel for refusing to work with France. “The government should be focusing on finding a workable solution with the French authorities,” he said.

He called for cooperation on “tackling vile people-smuggling gangs and properly managing safe routes to prevent people risking their lives.”

The Tories also claim they are tackling people smuggling by making it harder for refugees to cross, but this only makes them more reliant on such gangs.

People smugglers are small-time criminals whose business model relies on Britain and the European Union’s racist border rules. If there were safe routes, there’d be no need for refugees to rely on traffickers.

Up to 850 refugees crossed the English Channel to Britain on Monday—higher than the last record of 828 reaching Britain in a single day at the end of last month.

Tim Naor Hilton, the chief executive of Refugee Action, said, “Refugees feel there is little choice other than to cross the Channel in flimsy boats.”

He explained that’s “because the government refuses to open up alternative routes to safety”.

Hilton added, “The shocking images we’ve seen in Afghanistan have shown what forces people to leave their country.

“That same terror is happening in other countries such as Eritrea, Iran, Sudan and elsewhere.”

Whether the Tories like it or not, Britain remains part of the UN’s 1951 refugee convention.

It means the Tory MPs’ demands might not be possible under present laws. But with Patel’s Nationality and Borders Bill making its way through parliament, legal changes may not be too far off.

The racist legislation would allow the Tories to set up offshore processing centres, turn away migrant boats and imprison those who do make it to Britain. For the first time, how asylum seekers enter Britain will determine whether their application is successful.

The only solution is to open the border and let refugees come to safety.