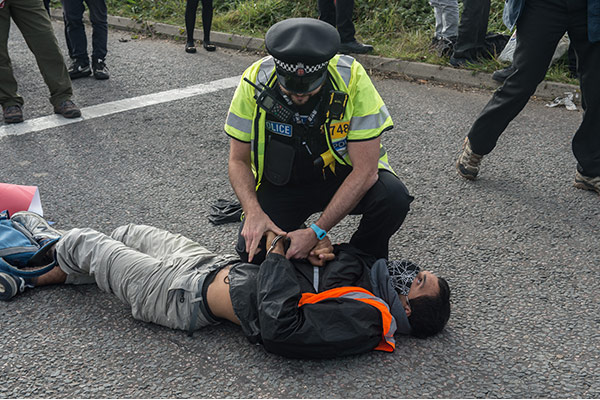 And the police followed her orders, cracking down on protesters who blocked one of Britain’s busiest motorways this week.

Cops arrested almost 50 people on Friday on suspicion of conspiracy to cause a public nuisance. They had already arrested more than 70 activists from the Extinction Rebellion (XR) linked group, Insulate Britain, on Monday and Wednesday.

And cops became even more forceful on Tuesday of this week, when a group of protesters occupied the M25 near Cobham in Surrey.

Socialist Worker photographer Guy Smallman said, “Some of the protesters had their hands glued to the road and the cops just ripped them off.

“It was the TSG riot cops backing the Highway police. Absolute zero tolerance—as if they’d been told get the road opened by whatever means at your disposal.”

Patel proclaimed “this government will not stand by and allow a small minority of selfish protesters to cause significant disruption”.

She promised that the protest-smashing Police Bill, which the Lords is currently debating, would hand cops more repressive powers.

The police are joining with calls for more far-reaching power.

“Environmental extremists using planned, illegal tactics of the blockading of main roads need to be dealt with as robustly as Islamist extremists.”

He demanded this is done “with the full force of the law, using all available police tactics.”

This is organised criminality and extremism. But you don’t get any of that. It’s very woke.”

The officer added that the “only way you can prevent this happening is if you infiltrate them with undercover officers and using intrusive intercepts”. “Then you would know what is planned and nip it in the bud,” he said.

Insulate Britain first blocked the M25 and M3 motorways on Monday, and then returned to other busy roads on Wednesday and Friday morning.

The group demanded the British government “immediately promises to fully fund and take responsibility for the insulation of all social housing in Britain by 2025”. One member of the group said, “Unfortunately, 10,000 won’t make it through this winter because of fuel poverty, which is totally avoidable in this country.

“We’re causing disruption but we are trying to take meaningful action, and unfortunately direct action is the only way to make the government act.

“They have vested interests, and they are not with the people.”

The Tories and ring wing press have whipped a backlash against the “eco mob” and “enviro zealots”.

The left must not line up behind this onslaught and defend the need for protests to be disruptive.

But direct action has the biggest impact when it involves mass numbers of people. And it is most effective when it targets the rich and powerful, the banks and corporations—who are responsible for driving all of us to climate catastrophe.

In November, world leaders will descend on Glasgow and offer more cop-outs over climate change at the COP26 summit. That’s because they are unwilling to break with their system that puts profit ahead of people and planet. It’s this system we need to shut down.

Everyone should throw themselves into building for the global climate strikes on 5 November and mass mobilisations on 6 November.