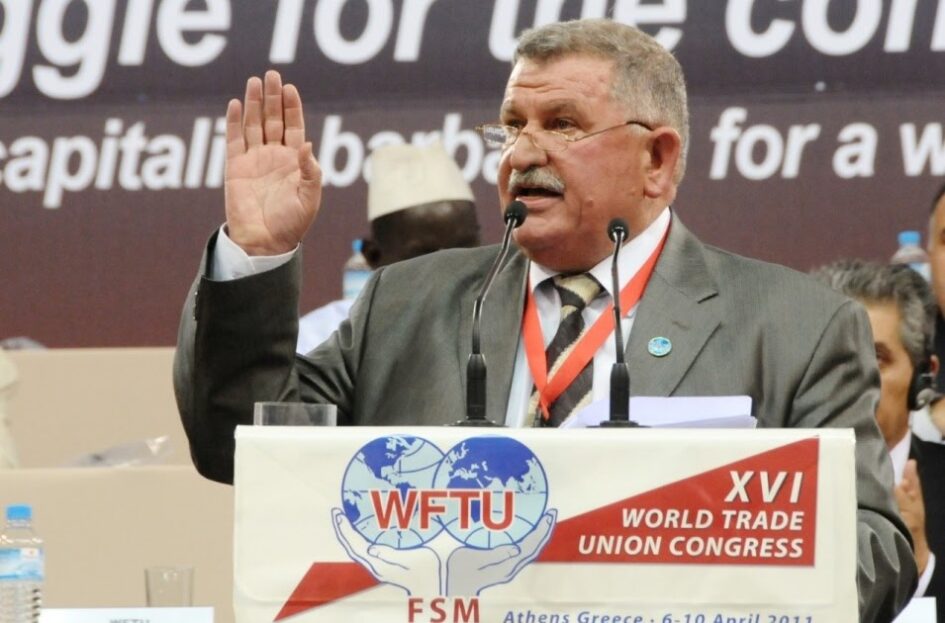 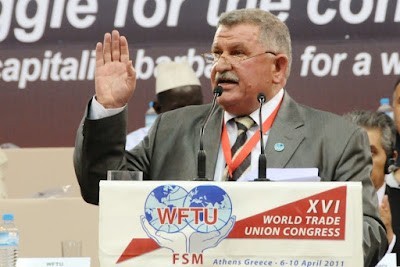 Azouz, a native of Aleppo, was a long-time member of the central leadership of Al-Baath Arab Socialist Party.

In a statement, the World Federation of Trade Unions (WFTU) stresses out:

“With great sorrow, the WFTU informs about the passing away of comrade Mohammad Shaban Azouz who served as president of the WFTU.

Comrade Mohamad held many posts in his long militant contribution, he served as president of GFTU Syria, president of ICATU, president of the WFTU, he was a member of the Syrian parliament, leader of the Al Baath party, he held the post of president of Syrian Workers and Peasants offices.

The WFTU bid farewell to Mohammad Shaban Azouz with feelings of deep sadness and honors his memory as a militant trade unionist who dedicated his entire life to the struggle for better living and working conditions for the workers of Syria, Arab world, and all over the globe.

We express our sincere condolences for the loss of the historical leader to his son Adnan Azouz who is a member of the WFTU secretariat and to his whole family as well as to his comrades in the GFTU.

May he rest in peace.

We will always remember him.”

PAME’s condolences for the death of Mohammad Shaban Azouz

PAME with sadness bids farewell to brother Mohammad Shaban Azouz, historic leader of the GFTU Syria and former President of the World Federation of Trade Unions.

Shaban Azouz played an important role in the activities of the World Federation of Trade Unions during the difficult years of the 1990s and early 2000s. He was an important figure for the trade union movement in the Arab countries and the ICATU, and as President of the GFTU Syria he developed important relations of friendship and cooperation with the class trade unions of Greece and PAME.

Steadfast in the struggle against imperialism and oppression, he left an important legacy to the world labour movement for the friendship and brotherhood of peoples.

PAME expresses its deepest condolences to his family and friends, the GFTU Syria and the World Federation of Trade Unions.

Economic devastation and political repression: A trade unionist’s view from inside Ukraine