Trade unionists in the USA fight back 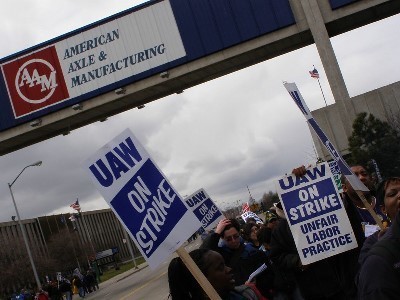 Union workers in 2021 were in at least 346 strikes across most sectors of the U.S. economy including manufacturing, transportation, and services. During October, there were 53 strikes of over 28,000 workers. “Striketober” and “Strikesgiving” were used to describe a series of important, high visibility strikes. Many union members were willing to stand up and risk a struggle against corporate power to improve their lives.

High profile strikes included 10,000 manufacturing workers in the United Auto Workers (UAW) union at four John Deere farm equipment factories, over a thousand bakery and distribution workers in the Bakery Workers union (BCTGM) at Nabisco, and 2,000 healthcare workers in Buffalo, New York, and 1,400 BCTGM cereal workers at Kellogg’s in four states. Around 1,100 coal miners in the United Mine Workers (UMW) at Warrior Met Coal in Alabama are still on strike. Over 700 nurses in the Massachusetts Nurses Association (MNA) at St. Vincent hospital in Worcester, Massachusetts just achieved a victory in the longest nurses’ strike in Massachusetts history (see our coverage at independentsocialistgroup.org).

With union action on the rise, some mega-corporations were put on the defensive in 2021. The threat of a strike in November by approximately 32,000 healthcare workers in the Alliance of Health Care Unions (AHCU) forced the Kaiser Permanente corporation to quickly retreat from recruiting scabs at $12,500 a week to strike-break. Instead, the corporation offered a settlement, backing off from severe understaffing and attempts to cut wages for new workers by creating a two-tier wage structure.

IATSE, a union representing technicians and others in film, T.V., and theater production, held a strike vote for 60,000 workers in 36 of its locals. Among the 90% of eligible union members who voted, 98% voted to go on strike. It would have been the union’s first nationwide strike. The members were ready to walk over issues like forced overtime, lack of meal breaks, and time to rest in between shifts. The big entertainment companies were forced into concessions but many IATSE members thought the contract proposal didn’t offer enough. The vote to accept it barely passed.

Strikes in 2021 reflected a growing mood of anger and defiance among working people.  Deliberate understaffing, forced overtime, and severe problems for many workers before COVID became worse in 2020-2021. Workers churned out huge profits for corporations under pandemic conditions. The two largest corporations in the U.S. — Amazon and Walmart — grabbed $10.7 billion in profits, a 56% increase in 2020 (Brookings 12/22/20). Despite record profits, corporations cut jobs and laid off workers in historic numbers with employment crashing. In 2020, over 9.37 million jobs were cut. This is almost two times the 5 million jobs that were lost in 2009 after the global financial crisis (Wall Street Journal, 1/8/21).

A recent Gallup Poll showed 68% of the U.S. approve of labor unions, the highest percentage since 1965. The same poll recorded 77% approval for unions among 18-34 year olds. In a 2017 survey, nearly half of non-union workers (48%) said they would join a union, a 50% increase since 1995. Important sections of workers are striking, and there’s new interest in unions from mostly unorganized industries including food service (Starbucks, Burgerville), grad students (MIT, University of New Mexico), and big tech (Kickstarter, Glitch).

Labor struggles could intensify in 2022

2022 could be a year of renewed energy and growth in the labor movement. However, mass organizing of millions of workers into unions means radical change in union strategy. The pandemic pressures continue and surging inflation is erasing wage increases won in recent strikes and contract negotiations. The “Great Resignation” shows workers looking for a way out of dead-end, low-wage jobs with minimal benefits. Instability, precarious jobs, and living paycheck to paycheck grind on, so many workers want to join unions.

There are basic changes the labor movement could implement to raise the profile of unions and make immediate gains in organizing, including multiple unions organizing together against Amazon, Walmart, and other corporations. It’s not realistic for one relatively small union, the Retail, Wholesale, and Department Store Union, trying to organize Amazon on its own, as happened in Bessemer, Alabama.

Basic solidarity needs to be rediscovered, like refusing to cross other unions’ picket lines. For example, in the strike of union nurses at St. Vincent hospital in Worcester, Massachusetts, leaders of UFCW Local 1445 and Teamster Local 170 had their members crossing the nurses’ picket lines throughout the strike.

The problems preventing the organizing of millions of workers into unions are systemic. Capitalism uses and abuses labor and nature on a world scale, exploiting cheap labor and natural resources around the globe for short-term maximization of profits, no matter the cost to people and the environment. With the technology in place today, capital is even more mobile and dangerous than in the past.

Unions need to organize on an international scale to launch strikes and other job actions against multinational corporations, in many different countries at the same time. Capitalist political parties like the Democrats won’t pass laws preventing corporations from laying off workers and moving production to other countries. The Democratic Party won’t seize the assets of runaway corporations or take big corporations under public ownership to save jobs and increase union power.

The labor movement needs to be the backbone of organizing a mass workers’ party in the U.S. Just beginning that process will push politics to the left and could win crucial reforms like a $20 per hour minimum wage and free, universal healthcare. Social benefits are comparably weak in the U.S. mainly because there’s no mass political party for working people. Workers’ parties (labor, socialist, communist) in many other countries were essential to winning free or heavily subsidized healthcare, childcare, higher education, and housing benefits.

Socialists led the organization of the first labor unions in the U.S. Every significant upsurge in the labor movement happened when the left and mass social movements were on the rise. In the early 20th century, regional labor parties and the Socialist Party strengthened the labor movement. The growth of the Communist Party and other left groups was central to the organizing of mass industrial unions and the CIO in the 1930s. A large increase in public sector union organizing in the late 1960s and 1970s was infused with the militancy of the Civil Rights and Black Power movements and the mass anti-Vietnam war protests.

Union density in the U.S. has declined since 1954. At that time, the combination of the Taft-Hartley Act, McCarthyism, and labor leaders supporting the Democratic Party severely weakened unions. Cutting the link between socialist ideas and the labor movement was a crucial reason for the decline of union membership and power.

Socialism provides the tools to analyze how the capitalist system works and why corporations are always out for higher profits regardless of the cost to society and the environment. Socialists have an alternative to capitalism: bringing democracy to the economy through democratic planning of labor power, social production, and distribution for human needs and a healthy environment. The labor movement needs the analysis, programme, and vision of socialism to fight and win against corporate power.

Fascism in the USA and Strategies to Fight It